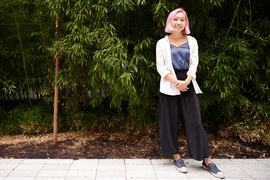 ↓ Download Image
Caption: Susan Su is an MIT senior majoring in mechanical engineering with a concentration in bioengineering and global development. She finds inspiration in the creativity at work in both makerspaces and the theater, where she works in technical and design roles.
Credits: Photo: Philip Keith 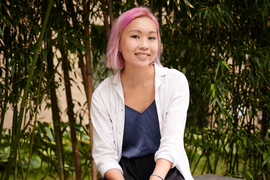 Caption:
Susan Su is an MIT senior majoring in mechanical engineering with a concentration in bioengineering and global development. She finds inspiration in the creativity at work in both makerspaces and the theater, where she works in technical and design roles.
Credits:
Photo: Philip Keith

Susan Su thought she was discovering a new café. She was in Beijing for the second half of her gap year, working with a biomedical engineering group at Tsinghua University. But the lab was relatively new, and she was filling her time by exploring the city.

She soon realized she had instead stumbled into the first nonprofit, independently owned theater in China, which supplemented its income with a café. Productions had been halted and staff had left due the Covid-19 pandemic, yet the place still had an atmosphere that intrigued her. By the end of the day Su had joined a list of volunteers, and for the next six months she found herself at the center of a small but vibrant arts culture.

Now a mechanical engineering major at MIT, Su had childhood dreams of being an artist, but she had never been exposed to theater before. Though she mostly helped out in café operations, just being around her co-workers was an eye-opening experience.

“It was then that I learned to really appreciate art, but also how unique these spaces were, especially in China,” Su says. “All of my co-workers were completely different than me. They were all performing arts students, [but] it was really nice how well we got along, despite how different we were.”

Su returned to MIT with a new appreciation for theater, not only as an art form but as a medium for expression and social change. Since then, she’s worked with MIT’s Musical Theatre Guild and the Wuming Theater Club in technical and design roles.

A broad range of interests

Su’s openness and appreciation for new experiences led her to study mechanical engineering with a concentration in bioengineering and global development. Though she came to MIT with an interest in molecular biology, being surrounded by the maker culture pushed her toward engineering.

“I never got down on my hands and knees and built a roller coaster,” says Su, referring to the East Campus dormitory’s tradition of constructing a roller coaster (or an otherwise large structure) in its courtyard during Residential Exploration Week. “But I think it more subtly influenced me,” she says, adding that she was also inspired by friends who worked on personal projects in makerspaces, which are shops designed and staffed specifically to help students to do just that.

Like that theater in China, MIT’s vibrant maker culture has been uniquely inspiring for Su. “I see all these things being created all around me, and that influenced me to be a more creative person,” she says.

Her interest in these technologies goes beyond the latest innovations; Su also strives to make an impact on the global scale. After returning from her gap year, she started taking classes in MIT’s D-Lab that focus on engineering solutions to global poverty challenges. Already, she has helped design a water desalination system with partners in southern Madagascar, and an assistive stair-climbing device for households in Latin America.

Su says it is this kind of work that she wants to continue after graduating: “I want to not only work directly with communities to create solutions to their problems, but also empower them to take ownership of these products and the process.”

“I really like theater that tackles social issues, particularly in China where people may not have as much power to speak out,” says Su. As the technical director of the production, she will be in charge of “costumes, set design, props, all of that. From a design standpoint, this will be a really interesting production.”

With her broad range of interests and focus on social change in both engineering and the arts, Su is poised to be a thoughtful global citizen. Though she’s still unsure on what exactly the future holds, Su knows wants to travel a lot in her career — “not necessarily in the vacationing sense. I really enjoy meeting new people and getting exposed to different cultures or people of different backgrounds.

“I want my perspective to be constantly changed, renewed, and challenged. And I feel that traveling and meeting people with different backgrounds, different stories — that’s a very effective way for us to put our own backgrounds and biases into perspectives and see what others value.”

Making her way through MIT

Ways of seeing the world