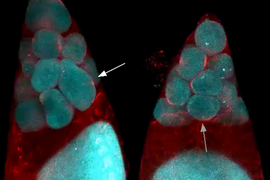 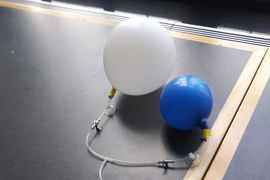 ↓ Download Image
Caption: The researchers showed that “nurse cells” surrounding the much larger oocyte dump their contents into the larger cell, just as air flows from a smaller balloon into a larger one when they are connected by small tubes in an experimental setup, as shown here.
Credits: Courtesy of the researchers

Caption:
The researchers showed that “nurse cells” surrounding the much larger oocyte dump their contents into the larger cell, just as air flows from a smaller balloon into a larger one when they are connected by small tubes in an experimental setup, as shown here.
Credits:
Courtesy of the researchers

There’s a reason why egg cells, or oocytes, are so big: They need to accumulate enough nutrients to support a growing embryo after fertilization, plus mitochondria to power all of that growth. However, biologists don’t yet understand the full picture of how egg cells become so large.

A new study in fruit flies, by a team of MIT biologists and mathematicians, reveals that the process through which the oocyte grows significantly and rapidly before fertilization relies on physical phenomena analogous to the exchange of gases between balloons of different sizes. Specifically, the researchers showed that “nurse cells” surrounding the much larger oocyte dump their contents into the larger cell, just as air flows from a smaller balloon into a larger one when they are connected by small tubes in an experimental setup.

“The study shows how physics and biology come together, and how nature can use physical processes to create this robust mechanism,” says Jörn Dunkel, an MIT associate professor of physical applied mathematics. “If you want to develop as an embryo, one of the goals is to make things very reproducible, and physics provides a very robust way of achieving certain transport processes.”

Dunkel and Adam Martin, an MIT associate professor of biology, are the senior authors of the paper, which appears this week in the Proceedings of the National Academy of Sciences. The study’s lead authors are postdoc Jasmin Imran Alsous and graduate student Nicolas Romeo. Jonathan Jackson, a Harvard University graduate student, and Frank Mason, a research assistant professor at Vanderbilt University School of Medicine, are also authors of the paper.

In female fruit flies, eggs develop within cell clusters known as cysts. An immature oocyte undergoes four cycles of cell division to produce one egg cell and 15 nurse cells. However, the cell separation is incomplete, and each cell remains connected to the others by narrow channels that act as valves that allow material to pass between cells.

Members of Martin’s lab began studying this process because of their longstanding interest in myosin, a class of proteins that can act as motors and help muscle cells contract. Imran Alsous performed high-resolution, live imaging of egg formation in fruit flies and found that myosin does indeed play a role, but only in the second phase of the transport process. During the earliest phase, the researchers were puzzled to see that the cells did not appear to be increasing their contractility at all, suggesting that a mechanism other than “squeezing” was initiating the transport.

“The two phases are strikingly obvious,” Martin says. “After we saw this, we were mystified, because there’s really not a change in myosin associated with the onset of this process, which is what we were expecting to see.”

Martin and his lab then joined forces with Dunkel, who studies the physics of soft surfaces and flowing matter. Dunkel and Romeo wondered if the cells might be behaving the same way that balloons of different sizes behave when they are connected. While one might expect that the larger balloon would leak air to the smaller until they are the same size, what actually happens is that air flows from the smaller to the larger.

Adapting mathematical equations that had already been derived to explain this “two-balloon effect,” the researchers came up with a model that describes how cell contents are transferred from the 15 small nurse cells to the large oocyte, based on their sizes and their connections to each other. The nurse cells in the layer closest to the oocyte transfer their contents first, followed by the cells in more distant layers.

“After I spent some time building a more complicated model to explain the 16-cell problem, we realized that the simulation of the simpler 16-balloon system looked very much like the 16-cell network. It is surprising to see that such counterintuitive but mathematically simple ideas describe the process so well,” Romeo says.

The first phase of nurse cell dumping appears to coincide with when the channels connecting the cells become large enough for cytoplasm to move through them. Once the nurse cells shrink to about 25 percent of their original size, leaving them only slightly larger than their nuclei, the second phase of the process is triggered and myosin contractions force the remaining contents of the nurse cells into the egg cell.

“In the first part of the process, there’s very little squeezing going on, and the cells just shrink uniformly. Then this second process kicks in toward the end where you start to get more active squeezing, or peristalsis-like deformations of the cell, that complete the dumping process,” Martin says.

The findings demonstrate how cells can coordinate their behavior, using both biological and physical mechanisms, to bring about tissue-level behavior, Imran Alsous says.

“Here, you have several nurse cells whose job it is to nurse the future egg cell, and to do so, these cells appear to transport their contents in a coordinated and directional manner to the oocyte,” she says.

Oocyte and early embryonic development in fruit flies and other invertebrates bears some similarities to those of mammals, but it’s unknown if the same mechanism of egg cell growth might be seen in humans or other mammals, the researchers say.

“There’s evidence in mice that the oocyte develops as a cyst with other interconnected cells, and that there is some transport between them, but we don’t know if the mechanisms that we’re seeing here operate in mammals,” Martin says.

The researchers are now studying what triggers the second, myosin-powered phase of the dumping process to start. They are also investigating how changes to the original sizes of the nurse cells might affect egg formation.

The research was funded by the National Institute of General Medical Sciences, a Complex Systems Scholar Award from the James S. McDonnell Foundation, and the Robert E. Collins Distinguished Scholarship Fund.

Biologists and mathematicians team up to explore tissue folding