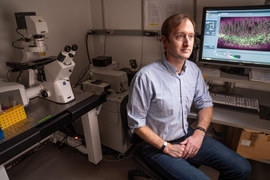 Embryonic development is tightly regulated by genes that control how body parts form. One of the key responsibilities of these genes is to make sure that tissues fold into the correct shapes, forming structures that will become the spine, brain, and other body parts.

During the 1970s and ’80s, the field of embryonic development focused mainly on identifying the genes that control this process. More recently, many biologists have shifted toward investigating the physics behind the tissue movements that occur during development, and how those movements affect the shape of tissues, says Adam Martin, an MIT associate professor of biology.

Martin, who recently earned tenure, has made key discoveries in how tissue folding is controlled by the movement of cells’ internal scaffolding, known as the cytoskeleton. Such discoveries can not only shed light on how tissues form, including how birth defects such as spina bifida occur, but may also help guide scientists who are working on engineering artificial human tissues.

“We’d like to understand the molecular mechanisms that tune how forces are generated by cells in a tissue, such that the tissue then gets into a proper shape,” Martin says. “It’s important that we understand fundamental mechanisms that are in play when tissues are getting sculpted in development, so that we can then harness that knowledge to engineer tissues outside of the body.”

Martin grew up in Rochester, New York, where both of his parents were teachers. As a biology major at nearby Cornell University, he became interested in genetics and development. He went on to graduate school at the University of California at Berkeley, thinking he would study the genes that control embryonic development.

However, while in his PhD program, Martin became interested in a different phenomenon — the role of the cytoskeleton in a process called endocytosis. Cells use endocytosis to absorb many different kinds of molecules, such as hormones or growth factors.

“I was interested in what generates the force to promote this internalization,” Martin says.

After finishing his PhD, Martin hoped to find a way to combine his study of cytoskeleton mechanics with his interest in developmental biology. As a postdoc at Princeton University, he started to study the phenomenon of tissue folding in fruit fly embryonic development, which is now one of the main research areas of his lab at MIT. Tissue folding is a ubiquitous shape change in tissues to convert a planar sheet of cells into a three-dimensional structure, such as a tube.

In developing fruit fly embryos, tissue folding invaginates cells that will form internal structures in the fly. This folding process is similar to tissue folding events in vertebrates, such as neural tube formation. The neural tube, which is the precursor to the vertebrate spinal cord and brain, begins as a sheet of cells that must fold over and “zip” itself up along a seam to form a tube. Problems with this process can lead to spina bifida, a birth defect that results from an incomplete closing of the backbone.

When Martin began working in this area, scientists had already discovered many of the transcription factors (proteins that turn on networks of specific genes) that control the folding of the neural tube. However, little was known about the mechanics of this folding.

“We didn’t know what types of forces those transcription factors generate, or what the mechanisms were that generated the force,” he says.

He discovered that the accumulation of myosin helps cells lined up in a row to become bottle-shaped, causing the top layer of the tissue to pucker inward and create a fold in the tissue. More recently, he found that myosin is turned on and off in these cells in a dynamic way, by a protein called RhoA.

“What we found is there’s essentially an oscillator running in the cells, and you get a cycle of this signaling protein, RhoA, that’s being switched on and off in a cyclical manner,” Martin says. “When you don’t have the dynamics, the tissue still tries to contract, but it falls apart.”

He also found that the dynamics of this myosin activity can be disrupted by depleting genes that have been linked to spina bifida.

Another important cellular process that relies on tissue folding is the epithelial-mesenchymal transition (EMT). This occurs during embryonic development when cells gain the ability to break free and move to a new location. It is also believed to occur when cancer cells metastasize from tumors to seed new tumors in other parts of the body.

During embryonic development, cells lined up in a row need to orient themselves so that when they divide, both daughter cells remain in the row. Martin has shown that when the mechanism that enables the cells to align correctly is disrupted, one of the daughter cells will be squeezed out of the tissue.

“This has been proposed as one way you can get an epithelial-to-mesenchymal transition, where you have cells dissociate from native tissue,” Martin says.  He now plans to further study what happens to the cells that get squeezed out during the EMT.

In addition to these projects, he is also collaborating with Jörn Dunkel, an MIT associate professor of mathematics, to map the network connections between the myosin proteins that control tissue folding during development. “That project really highlights the benefits of getting people from diverse backgrounds to analyze a problem,” Martin says.

A mathematical view on cell packing