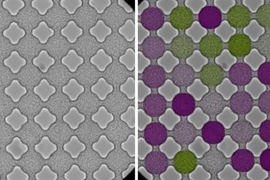 ↓ Download Image
Caption: As bacteria stream through a microfluidic lattice, they synchronize and swim in patterns similar to those of electrons flowing through a magnetic material. This image shows a microfluidic 6x6 lattice. The left-hand side shows the original data as seen under the microscope. The overlaid color coding on the right-hand side shows the relative strength of clockwise (purple) or anti-clockwise (green) circulation.
Credits: Courtesy of the researchers

Caption:
As bacteria stream through a microfluidic lattice, they synchronize and swim in patterns similar to those of electrons flowing through a magnetic material. This image shows a microfluidic 6x6 lattice. The left-hand side shows the original data as seen under the microscope. The overlaid color coding on the right-hand side shows the relative strength of clockwise (purple) or anti-clockwise (green) circulation.
Credits:
Courtesy of the researchers

There are certain universal patterns in nature that hold true, regardless of objects’ size, species, or surroundings. Take, for instance, the branching fractals seen in both tree limbs and blood vessels, or the surprisingly similar spirals in mollusks and cabbage.

Now scientists at MIT and Cambridge University have identified an unexpected shared pattern in the collective movement of bacteria and electrons: As millions of bacteria stream through a microfluidic lattice, they synchronize and swim in patterns similar to those of electrons orbiting around atomic nuclei in a magnetic material.

The researchers found that by tuning certain dimensions of the microfluidic lattice, they were able to direct millions of microbes to align and swim in the same direction, much the way electrons circulate in the same direction when they create a magnetic field. With slight changes to the lattice, groups of bacteria flowed in opposite directions, resembling electrons in a nonmagnetic material.

Surprisingly, the researchers also identified a mathematical model that applies to the motions of both bacteria and electrons. The model derives from a general lattice field theory, which is typically used to describe the quantum behavior of electrons in magnetic and electronic materials. The researchers reduced this complex model to a much simpler, “textbook” model, which predicts that a phase transition, or a change in flow direction, should occur with certain changes to a lattice’s dimensions — a transition that the team observed in their experiments with bacteria.

“It’s very surprising that we see this universality,” says Jörn Dunkel, assistant professor of applied mathematics at MIT. “The really nice thing is, you have a living system here that shows all these behaviors that people think are also going on in quantum systems.”

Dunkel and his colleagues at Cambridge University — Hugo Wioland, Francis Woodhouse, and Raymond Goldstein ’83 — published their results yesterday in the journal Nature Physics.

This animation shows bacteria swimming, in patterns, in a microfluidics device. The reconstructed bacterial velocity field is indicated by the red arrows on the right. (Courtesy of the researchers)

Dunkel first began looking into the swimming patterns of bacteria as a postdoc with the Cambridge University group led by Goldstein. The researchers were exploring how to manipulate bacterial flow, as a way to prevent biofilms — dense layers of microbial slime that can take over shower stalls, clog filtration systems, and cling to ship hulls.

In initial experiments, the researchers placed bacteria in progressively smaller pools, or wells, and observed their swimming patterns. In larger wells, the microbes tended to swim in relative disorder. In much smaller wells, measuring about 70 microns wide, thousands of bacteria began to behave in orderly way, swimming in a spiral, in the same direction within the well, for long periods of time.

In the new study, the researchers observed bacteria flowing through an interconnected array of these small wells. Made of a transparent, rubber-like polymer, the lattice is composed of 100 wells, each measuring 70 microns and connected to its neighbors by a small channel. They injected bacteria into the array and observed the direction in which bacteria flowed within each well.

Dunkel and his colleagues found that they were able to manipulate the bacteria’s flow by changing one key dimension: the diameter of the connecting channels, or what they call gap size. If the gap was too small, bacteria in one well would spiral in the opposite direction from their neighbors in the adjacent well, like the alternating circulation of electrons in a nonmagnetic material. If, however, the gap size was 8 microns or larger, the researchers observed a phase transition, in which bacteria in every well synchronized, flowing in the same direction, like aligned electrons in a magnetic field.

Examining this phase transition more closely, the researchers found that a larger gap size allows more bacteria to flow from one well to a neighboring well. This movement of bacteria between wells creates an “edge current,” or a flow of bacteria at the edges of each well, which in turn induces bacteria in the well’s interior to flow against it. The overall result is that the majority of bacteria within each well flow in the same direction, opposite to the edge currents.

To see whether the similar motions of bacteria and electrons bear out mathematically, Dunkel and his colleagues looked to lattice field theory, the model typically applied to describe the behavior of electrons in quantum systems. They reduced this more complicated model to the Ising model — a “textbook” model used to describe the spin of electrons within a two-dimensional square lattice similar to the microfluidic lattice fabricated by the researchers.

Going forward, Dunkel says he would like to explore bacterial flow in more random arrangements and environments.

“In real porous medium like soil or tissue, you don’t have this very even distribution of bacteria,” Dunkel says. “So how is collective motion of bacteria controlled by randomness of the medium? That’s the next bigger goal.”

Miha Ravnik, professor of mathematics and physics at the University of Ljubljana in Slovenia, says that aside from biological and medical applications, the ability to control the flow and “spin” of bacteria may someday enable “active systems that exhibit logical states.”

"Imagine 'live computers,' where computer processing would — instead of using steered electrical currents — correspond to actual change of a living matter, i.e. flow, motion, or growth of some active material,” says Ravnik, who was not involved in the research. "Today this might seem futuristic, but in ten years’ time, research such as this as could be a cornerstone for such a fundamentally novel and society-changing research pathway.”