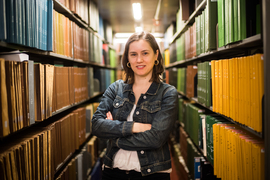 ↓ Download Image
Caption: “It matters so much to think about and pay attention to the ways different social identities and structural factors affect vulnerabilities. It shows the power of an intersectional analysis,” says co-author Marion Boulicault PhD ’20.
Credits: Image: Joseph Lee

Caption:
A new study examines the impact of race and gender on Covid-19 outcomes.

Caption:
“It matters so much to think about and pay attention to the ways different social identities and structural factors affect vulnerabilities. It shows the power of an intersectional analysis,” says co-author Marion Boulicault.
Credits:
Image: Joseph Lee

Men have been more susceptible than women to the Covid-19 virus since the start of the pandemic. At a glance, that suggests sex-based biological differences shape the way people respond to the disease. But a newly published study indicates societal factors in the U.S. play an even bigger role.

One of the study’s findings is that Black women are up to four times more likely to die of Covid-19 than white men are. Additionally, Black men have the highest Covid-19 mortality rates of any group defined by both race and sex — up to six times higher than the rates among white men. These findings strongly suggest structural inequities in society, including that Black people are more likely than whites to hold higher-risk jobs, are a principal factor in driving disparities in Covid-19 health outcomes across and between social groups.

The study, based on an analysis of data from Georgia and Michigan, is distinctive in simultaneously examining the impact of both race and gender on Covid-19 outcomes.

“Our finding that Black women as a group are four times more vulnerable than white men really challenges the idea that sex disparities are driven primarily by sex-based biological differences, and makes clear the kinds of vulnerabilities that might be invisible if you focus purely on either race or sex alone,” says Marion Boulicault, a graduate student in the MIT Department of Lingustics and Philosophy, and co-author of the study.

To conduct the study, the researchers used statistics through late September 2020 from Georgia and Michigan, the only two U.S. states that collected data tabulating age, race, and gender for all individual Covid-19 patients. That allowed the scholars to compare outcomes not just by race or gender, but a combination of those factors. Overall, they found similar patterns in both Georgia and Michigan, even though the two states have featured a variety of policy differences during the pandemic.

“Georgia and Michigan are large and diverse states, and they are quite different in a number of respects,” observes Boulicault. “The fact that we found these disparities and they held across both of these states, given their differences, is noteworthy.”

“If you thought these sex disparities were innate differences, you might assume they would hold across racial groups, and so seeing these differences within groups shows the limitations of thinking about sex-based-biology as the only or main determinant of sex disparities,” notes Boulicault, who will be starting a postdoc in the MIT Schwarzman College of Computing later this year.

She also emphasizes, as a consensus of public-health researchers has found, that the differences in Covid-19 outcomes between racial groups are societal and structural, not biological. Overall, as the paper notes, men represent about 57 percent of “essential” workers in the U.S. — those in higher-risk jobs, such as service-industry positions. However, women of color themselves represent a disproportionate number of workers in the health care industries and have often been in frontline jobs during the pandemic.

“It highlights the role of inequalities and structural racism in determining outcomes in this pandemic,” Boulicault says. “The fact that Black women are disproportionately represented in health care occupations and service occupations that are risk factors for Covid-19 exposure is an example of one kind of structural inequality.”

Boulicault says she and her colleagues would welcome an expansion of this line of research drawing data from additional states, where possible, as well as more research examining the impact of high-exposure work on Covid-19 outcomes.

“This work opens up different hypotheses,” Boulicault says. “It matters so much to think about and pay attention to the ways different social identities and structural factors affect vulnerabilities. It shows the power of intersectional analysis.”

What has the pandemic revealed about the US health care system — and what needs to change?

3 Questions: Marion Boulicault and Milo Phillips-Brown on ethics in a technical curriculum