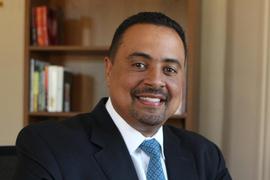 As Covid-19 vaccinations continue to be distributed, equity is vital to the process. Vaccination availability for individuals from minority groups is an important issue — partly because of longstanding inequitable access to quality care, and partly because of public sentiment, reflected in polls showing that Black Americans’ mistrust of health care and medical research may influence their feelings about getting vaccinated. Charles Senteio, a health informatics scholar focused on equity and one of MIT’s 2020-21 MLK Visiting Professors, has been conducting an ongoing study of this issue, along with David Rand, the Erwin H. Schell professor at the MIT Sloan School of Management. Senteio, Rand, and their interdisciplinary team have found that attitudes toward Covid-19 vaccines vary significantly within Black communities, and they contend that effective vaccine outreach should factor in these differences.

Senteio is visiting MIT from Rutgers University, where he is an assistant professor in the School of Communication and Information. An expert in the delivery of health care to at-risk patients and communities, he helps use technology to develop sustainable models for better care. MIT News spoke with Senteio about his work.

Q: You’re working on a study, still in progress, about vaccine hesitation among people in underserved communities. What are your findings so far?

A: We tend to at times view minority groups as a homogenous lot. But that’s not correct. After running several experiments with thousands of participants, we found that Black Americans who are more immersed in African American culture have substantially more negative attitudes toward the Covid-19 vaccine. These cultural differences exist above and beyond variation accounted for by basic demographics like age, gender, education, and income — and they show how problematic it is to describe health perceptions for Black Americans as if they are the same.

As a researcher who does community-based work, I think if we can be more precise about understanding the vaccine hesitation within groups, and efforts to access the vaccines, specifically among Black Americans, then we can better target messaging to address disinformation or other barriers to accessing health information. Our research will test the current version of the old trope that says, “Blacks tend to have higher levels of mistrust, therefore they’re less willing to be vaccinated. So let’s assume that their vaccination rates will be lower.” That kind of concession is the result of bad science at worst, and sloppy science at best.

We intend to translate what we learn about how Covid-19 perceptions, and other potential barriers to care, influence vaccination as well as other chronic conditions that are characterized by persistent racial health inequity, like cancer, diabetes, and kidney disease. We’re in the process of trying to refine our understanding of how perceptions, and potential barriers to care, may influence health behaviors.

Q: What caused you to look at this particular issue?

A: Last year when the pandemic was descending upon all of us I, like many, was having discussions with different people, including medical research colleagues and nonscientists, trying to understand what the heck was going on in the country and in the world. During discussions among people of color from my own personal network, I observed vast differences in Covid-19 perceptions and beliefs. This reinforced the importance of understanding intragroup differences when conducting health equity work because ethnic minority groups can have substantial diversity within them, and these differences are not consistently reflected in racial equity health research.

And for me, as an equity researcher, around last April and into May, I was recognizing a potential new tsumani of inequity looming. I and other equity researchers were realizing that the same structural factors that affect racial inequity for common chronic diseases, such as diabetes and cancer, are similar to the structural factors that appeared to be influencing racial inequity in Covid-19 infection, hospitalization, and mortality. For example, people of color are disproportionally represented in “essential” jobs, like meat processing, food service, and couriers.

I didn’t realize that the bench scientists would do such fantastic work so quickly to develop safe and highly effective vaccines, and that the FDA would act so quickly to approve them. But last summer I had a sense that whenever vaccines became available, we social scientists would be needed to translate the tremendous vaccine research from the bench to communities to help promote vaccination. Because vaccines don’t make us safe, vaccinations do. And that’s where social science comes in.

Q: We’ve seen from news coverage that it has been a struggle in some places to distribute the vaccine to all groups. Has it been a struggle to get people to recognize the inequity issues in the first place — or not?

A: The reporting of racial inequity in Covid-19 infection, hospitalization, and mortality and the killing of George Floyd made it much more difficult to deny or claim ignorance to the longstanding structural factors which are the best explanations of persistent racial inequity. I’ve probably had more conversations about health equity in the past year than I’ve had in the previous decade. I think what Covid-19 has done, among other things, is expose causes of persistent inequity, the structural factors which we refer to as social determinants of health. For example, it’s just not as easy for some of us to socially distance. If I work in a supermarket, if I work in the service industry, if I deliver packages for a living, if I work as a flight attendant — I don’t have the luxury and privilege to rearrange a few bookcases behind my desk, buy a cool camera, and still do my job while adhering to social distancing guidelines.

As the grocery clerks, food delivery drivers, and couriers became so important to us last spring, I think many of us realized that structural factors, like type of employment, matter quite a bit to our maintaining our health and controlling our risk. In my view, the awareness and appreciation of the drivers of health inequity have never been greater than they are now. And that is a good thing. We equity researchers are working hard to take advantage of this heightened awareness, however long it may last.

Q: Although it’s not that researchers haven’t been trying, right? It’s taken an event of this magnitude to get people to more explicitly acknowledge these structural issues.

A: I submit that the first empirical study of racial health inequity in the U.S. was W.E.B. Du Bois’ seminal work “The Philadelphia Negro,” which was published in 1899. I’ve gone back to this important work quite a bit since I’ve been asked to give talks over the past eight months or so about Covid-19 and racial health inequity. Du Bois the sociologist found, in studying the racial health inequities in the racially and economically diverse 7th ward of Philadelphia, that structural factors and social living conditions were the primary explanatory factors for racial differences in health. And these differences had been known for decades up to that point. Du Bois’ research refuted the “scientific” view that genetics was the primary cause of racial differences, which some posited as an explanatory factor both then and now to explain racial inequity across a variety of areas beyond health, like educational attainment and criminal justice.

I think when good, reasonable people try to explain racial inequities, whether in criminal justice or health or the environment, they may reflexively search for explanations separate from structural inequality and racism. It is just easier to assign responsibility, or blame, to individuals. But as one of my public health professors said in a class I took early in my health research training: Our behavior is primarily a function of our options. I think oftentimes any of us can lose track of that. I do too sometimes, despite decades of research I’m familiar with that finds simply living near a poor neighborhood increases your risk of an early death. And for many of us, these types of facts, which help illuminate the importance of structural factors, can be difficult to come to grips with.

Q: So, do you think if people start to understand health disparities better because of Covid-19, and find some ways to turn that into action, it could at least make a difference in the future?

A: If we come out of this pandemic with a heightened awareness and understanding of how people’s lived experience exerts influence on their perspectives and health behaviors, then that might help result in some measure of good in the face of 550,000-plus lives lost in the U.S., and almost 3 million lost worldwide, in addition to so many other lives forever impacted.