Experts say people are more willing to get the Covid-19 vaccine when told how popular it is.
Peter Dizikes | MIT News Office
Publication Date:
Press Inquiries 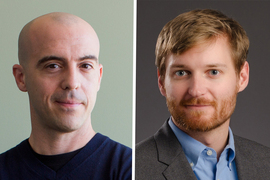 ↓ Download Image
Caption: Sinan Aral (left) and Dean Eckles are two of the co-authors of a new MIT-based study showing that focusing on people reluctant to get vaccines can be counterproductive. Instead, people are swayed by hearing how popular vaccines are.
Credits: Image: Aral photo by M Scott Bauer.

Caption:
Sinan Aral (left) and Dean Eckles are two of the co-authors of a new MIT-based study showing that focusing on people reluctant to get vaccines can be counterproductive. Instead, people are swayed by hearing how popular vaccines are.
Credits:
Image: Aral photo by M Scott Bauer.

Public health officials have issued plenty of warnings about people who are reluctant to get vaccinated for Covid-19. But an MIT research team centered at MIT’s Initiative on the Digital Economy (IDE) says this may be counterproductive: When shown basic numbers about how popular Covid-19 vaccines are, the fraction of people reluctant to get the vaccine drops by 5 percent. To reach these conclusions, the researchers drew on a massive international survey about the pandemic, including 1.8 million responses from 67 countries, and developed an experiment covering 300,000 people in 23 countries. The group has described their findings in a working paper and a recent LA Times op-ed.

The MIT team consists of Alex Moehring, a PhD candidate at the MIT Sloan School of Management; Avinash Collis PhD ’20, an assistant professor at the University of Texas at Austin; Kiran Garimella, a postdoc at the MIT Institute for Data, Systems, and Society (IDSS); M. Amin Rahimian, a postdoc at IDSS; Sinan Aral, the David Austin Professor of Management at MIT Sloan, co-director of IDE, and author of the recent book “The Hype Machine”; and Dean Eckles, the Mitsubishi Career Development Professor and an associate professor of marketing at MIT Sloan. MIT News talked to Aral and Eckles about the findings.

Q: You have written that there is a “dangerous irony” in public health officials and other people highlighting those who are reluctant to get a Covid-19 vaccine. Why is that?

Eckles: It makes sense for public health officials and others to be worried about vaccine hesitancy, because we need a very high level of vaccine acceptance. But a lot of the time, officials make it seem as if more people are hesitant than is really the case.

Many people who say they’re unsure if they’ll get the vaccine may be pretty easy to sway, and one way is by telling them, “Actually, a large fraction of people in your country say they’re going to accept the vaccine.” We found that simply by giving people accurate information about the percentage of people in their country who say they will accept a vaccine, it increased vaccine-acceptance intentions across 23 countries. Part of what’s exciting is how consistent this finding is.

Aral: I’d like to add three points. Before this study, there were at least two plausible countervailing hypotheses. One is that if more people heard that others would take the vaccine, the more they [themselves] would be inclined to take the vaccine. The other is that people would free-ride on the vaccine intentions of others: “Well, if they’re going to take it, they can create herd immunity and I can avoid taking a vaccine myself.” Our research shows pretty clearly that the first is true, while the second is not true [on aggregate].

Second, it’s interesting that the treatment most changes the behavior of those people who are most underestimating the amount of vaccine acceptance among others. And third, there’s an overarching theme here: Simply providing people the truth, the accurate information, is also very effective at swaying people to accept the vaccine.

Q: What does this teach us about human behavior, at least in these kinds of situations?

Aral: One really important thing is [the power of] social proof. When you see large portions of people behave in a certain way, it legitimizes that behavior. And there are countless examples of this. When a lot of people say a restaurant is good, you’re swayed. This is another instance of that.

Eckles: There’s an informational process of social learning. People are trying to figure out: What’s the quality of this thing? It might seem weird to some of us following the news more, or watching what’s happening with [vaccine] trials, but a lot of people are not paying attention. They may know there are these vaccines, but even so, other people’s choices can be quite informative to them.

Q: What should be the core of good messaging about vaccination programs, based on your research over the last year?

Aral: As recently as February, a coronavirus task force started its communications by focusing on vaccine hesitancy. That is not, per our findings, as effective as leading with the vast and growing majority who are accepting. That’s not to say we think public health officials shouldn’t talk about vaccine hesitancy, or that people who are hesitant shouldn’t be targeted with outreach to convince them of the safety and efficacy of vaccines — we believe that should all happen. But neglecting to emphasize the vast and growing majorities who are accepting vaccines doesn’t increase vaccine acceptance as much.

Eckles: What we’re saying is one part of a broader messaging strategy. Giving people this information is enough to shift their motivation to get the vaccine in a lot of cases. Though, getting them motivated is not enough if they don’t know what website to go to, or if it’s hard to get an appointment. It’s good to couple motivational messages with actionable information.

Aral: To our knowledge this is the largest global survey of Covid-19 behaviors, norms, and perceptions. We’ve been running it since July. We’ve also done many published studies, whether about social spillovers [during the pandemic], vaccines, vaccine misinformation — all of this is part of a very forceful effort by the Initiative on the Digital Economy to make meaningful contributions to changing the trajectory of this pandemic.

"You remember when we go to election polls, the voting booth, during elections, we get a little sticker that says 'I Voted'" says Prof. Sinan Aral of a new study that finds hearing about people who have received the Covid-19 vaccine can increase vaccine acceptance rates. "You should think of this as a very similar type of strategy. The reason we get that sticker that says 'I Voted' is that social proof motivates people to join in. And so if we got a sticker or put out a video or put out a message that said, 'I got vaccinated,' it would have the same effect for the same reasons."

By combining chemotherapy, tumor injury, and immunotherapy, researchers show that the immune system can be re-engaged to destroy tumors in mice.

A new book from the MIT Future Heritage Lab goes inside a Syrian refugee camp to uncover the creative lives of its inhabitants.