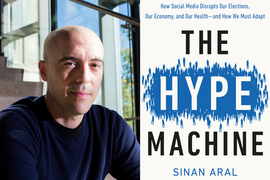 ↓ Download Image
Caption: “Social media disrupts our elections, our economy, and our health,” says Aral, who is the David Austin Professor of Management at the MIT Sloan School of Management.
Credits: Photo: M. Scott Brauer

Caption:
“Social media disrupts our elections, our economy, and our health,” says Aral, who is the David Austin Professor of Management at the MIT Sloan School of Management.
Credits:
Photo: M. Scott Brauer

If so, you are not alone — which is the point, of course. Humans are highly social creatures. Our brains have become wired to process social information, and we usually feel better when we are connected. Social media taps into this tendency.

“Human brains have essentially evolved because of sociality more than any other thing,” says Sinan Aral, an MIT professor and expert in information technology and marketing. “When you develop a population-scale technology that delivers social signals to the tune of trillions per day in real-time, the rise of social media isn’t unexpected. It’s like tossing a lit match into a pool of gasoline.”

The numbers make this clear. In 2005, about 7 percent of American adults used social media. But by 2017, 80 percent of American adults used Facebook alone. About 3.5 billion people on the planet, out of 7.7 billion, are active social media participants. Globally, during a typical day, people post 500 million tweets, share over 10 billion pieces of Facebook content, and watch over a billion hours of YouTube video.

As social media platforms have grown, though, the once-prevalent, gauzy utopian vision of online community has disappeared. Along with the benefits of easy connectivity and increased information, social media has also become a vehicle for disinformation and political attacks from beyond sovereign borders.

“Social media disrupts our elections, our economy, and our health,” says Aral, who is the David Austin Professor of Management at the MIT Sloan School of Management.

Now Aral has written a book about it. In “The Hype Machine,” published this month by Currency, a Random House imprint, Aral details why social media platforms have become so successful yet so problematic, and suggests ways to improve them.

As Aral notes, the book covers some of the same territory as “The Social Dilemma,” a documentary that is one of the most popular films on Netflix at the moment. But Aral’s book, as he puts it, "starts where ‘The Social Dilemma’ leaves off and goes one step further to ask: What can we do about it?”

“This machine exists in every facet of our lives,” Aral says. “And the question in the book is, what do we do? How do we achieve the promise of this machine and avoid the peril? We’re at a crossroads. What we do next is essential, so I want to equip people, policymakers, and platforms to help us achieve the good outcomes and avoid the bad outcomes.”

“The Hype Machine” draws on Aral’s own research about social networks, as well as other findings, from the cognitive sciences, computer science, business, politics, and more. Researchers at the University of California at Los Angeles, for instance, have found that people obtain bigger hits of dopamine — the chemical in our brains highly bound up with motivation and reward — when their social media posts receive more likes.

At the same time, consider a 2018 MIT study by Soroush Vosoughi, an MIT PhD student and now an assistant professor of computer science at Dartmouth College; Deb Roy, MIT professor of media arts and sciences and executive director of the MIT Media Lab; and Aral, who has been studying social networking for 20 years. The three researchers found that on Twitter, from 2006 to 2017, false news stories were 70 percent more likely to be retweeted than true ones. Why? Most likely because false news has greater novelty value compared to the truth, and provokes stronger reactions — especially disgust and surprise.

In this light, the essential tension surrounding social media companies is that their platforms gain audiences and revenue when posts provoke strong emotional responses, often based on dubious content.

“This is a well-designed, well-thought-out machine that has objectives it maximizes,” Aral says. “The business models that run the social-media industrial complex have a lot to do with the outcomes we’re seeing — it’s an attention economy, and businesses want you engaged. How do they get engagement? Well, they give you little dopamine hits, and … get you riled up. That’s why I call it the hype machine. We know strong emotions get us engaged, so [that favors] anger and salacious content.”

From Russia to marketing

“The Hype Machine” explores both the political implications and business dimensions of social media in depth. Certainly social media is fertile terrain for misinformation campaigns. During the 2016 U.S. presidential election, Russia spread  false information to at least 126 million people on Facebook and another 20 million people on Insta­gram (which Facebook owns), and was responsible for 10 million tweets. About 44 percent of adult Americans visited a false news source in the final weeks of the campaign.

“I think we need to be a lot more vigilant than we are,” says Aral.

We do not know if Russia’s efforts altered the outcome of the 2016 election, Aral says, though they may have been fairly effective. Curiously, it is not clear if the same is true of most U.S. corporate engagement efforts.

As Aral examines, digital advertising on most big U.S. online platforms is often wildly ineffective, with academic studies showing that the “lift” generated by ad campaigns — the extent to which they affect consumer action — has been overstated by a factor of hundreds, in some cases. Simply counting clicks on ads is not enough. Instead, online engagement tends to be more effective among new consumers, and when it is targeted well; in that sense, there is a parallel between good marketing and guerilla social media campaigns.

“The two questions I get asked the most these days,” Aral says, “are, one, did Russia succeed in intervening in our democracy? And two, how do I measure the ROI [return on investment] from marketing investments? As I was writing this book, I realized the answer to those two questions is the same.”

“The Hype Machine” has received praise from many commentators. Foster Provost, a professor at New York University’s Stern School of Business, says it is a “masterful integration of science, business, law, and policy.” Duncan Watts, a university professor at the University of Pennsylvania, says the book is “essential reading for anyone who wants to understand how we got here and how we can get somewhere better.”

In that vein, “The Hype Machine” has several detailed suggestions for improving social media. Aral favors automated and user-generated labeling of false news, and limiting revenue-collection that is based on false content. He also calls for firms to help scholars better research the issue of election interference.

Aral believes federal privacy measures could be useful, if we learn from the benefits and missteps of the General Data Protection Regulation (GDPR) in Europe and a new California law that lets consumers stop some data-sharing and allows people to find out what information companies have stored about them. He does not endorse breaking up Facebook, and suggests instead that the social media economy needs structural reform. He calls for data portability and interoperability, so “consumers would own their identities and could freely switch from one network to another.” Aral believes that without such fundamental changes, new platforms will simply replace the old ones, propelled by the network effects that drive the social-media economy.

“I do not advocate any one silver bullet,” says Aral, who emphasizes that changes in four areas together — money, code, norms, and laws — can alter the trajectory of the social media industry.

But if things continue without change, Aral adds, Facebook and the other social media giants risk substantial civic backlash and user burnout.

“If you get me angry and riled up, I might click more in the short term, but I might also grow really tired and annoyed by how this is making my life miserable, and I might turn you off entirely,” Aral observes. “I mean, that’s why we have a Delete Facebook movement, that’s why we have a Stop Hate for Profit movement. People are pushing back against the short-term vision, and I think we need to embrace this longer-term vision of a healthier communications ecosystem.”

Changing the social media giants can seem like a tall order. Still, Aral says, these firms are not necessarily destined for domination.

“I don’t think this technology or any other technology has some deterministic endpoint,” Aral says. “I want to bring us back to a more practical reality, which is that technology is what we make it, and we are abdicating our responsibility to steer technology toward good and away from bad. That is the path I try to illuminate in this book.”

Prof. Sinan Aral’s new book, “The Hype Machine,” has been selected as one of the best books of the year about AI by Wired. Gilad Edelman notes that Aral’s book is “an engagingly written shortcut to expertise on what the likes of Facebook and Twitter are doing to our brains and our society.”

Prof. Sinan Aral speaks with Danny Crichton of TechCrunch about his new book, “The Hype Machine,” which explores the future of social media. Aral notes that he believes a starting point “for solving the social media crisis is creating competition in the social media economy.”

Prof. Sinan Aral speaks with New York Times editorial board member Greg Bensinger about how social media platforms can reduce the spread of misinformation. “Human-in-the-loop moderation is the right solution,” says Aral. “It’s not a simple silver bullet, but it would give accountability where these companies have in the past blamed software.”

Prof. Sinan Aral speaks with Kara Miller of GBH’s Innovation Hub about his research examining the impact of social media on everything from business re-openings during the Covid-19 pandemic to politics.

Prof. Sinan Aral speaks with NPR’s Michael Martin about his new book, “The Hype Machine,” which explores the benefits and downfalls posed by social media. “I've been researching social media for 20 years. I've seen its evolution and also the techno utopianism and dystopianism,” says Aral. “I thought it was appropriate to have a book that asks, 'what can we do to really fix the social media morass we find ourselves in?'”