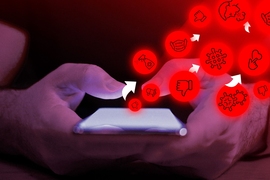 ↓ Download Image
Caption: “When people are consuming news on social media, their inclination to share that news with others interferes with their ability to assess its accuracy, according to a new study co-authored by MIT researchers.”
Credits: Image: Jose-Luis Olivares, MIT

Caption:
“When people are consuming news on social media, their inclination to share that news with others interferes with their ability to assess its accuracy, according to a new study co-authored by MIT researchers.”
Credits:
Image: Jose-Luis Olivares, MIT

To stay current about the Covid-19 pandemic, people need to process health information when they read the news. Inevitably, that means people will be exposed to health misinformation, too, in the form of false content, often found online, about the illness.

Now a study co-authored by MIT scholars contains bad news and good news about Covid-19 misinformation — and a new insight that may help reduce the problem.

The bad news is that when people are consuming news on social media, their inclination to share that news with others interferes with their ability to assess its accuracy. The study presented the same false news headlines about Covid-19 to two groups of people: One group was asked if they would share those stories on social media, and the other evaluated their accuracy. The participants were 32.4 percent more likely to say they would share the headlines than they were to say those headlines were accurate.

“There does appear to be a disconnect between accuracy judgments and sharing intentions,” says MIT professor David Rand, co-author of a new paper detailing the findings. “People are much more discerning when you ask them to judge the accuracy, compared to when you ask them whether they would share something or not.”

The good news: A little bit of reflection can go a long way. Participants who were more likely to think critically, or who had more scientific knowledge, were less likely to share misinformation. And when asked directly about accuracy, most participants did reasonably well at telling true news headlines from false ones.

Moreover, the study offers a solution for over-sharing: When participants were asked to rate the accuracy of a single non-Covid-19 story at the start of their news-viewing sessions, the quality of the Covid-19 news they shared increased significantly.

“The idea is, if you nudge them about accuracy at the outset, people are more likely to be thinking about the concept of accuracy when they later choose what to share. So then they take accuracy into account more when they make their sharing decisions,” explains Rand, who is the Erwin H. Schell Associate Professor with joint appointments at the MIT Sloan School of Management and the Department of Brain and Cognitive Sciences.

The paper, “Fighting COVID-19 misinformation on social media: Experimental evidence for a scalable accuracy nudge intervention,” appears in Psychological Science. Besides Rand, the authors are Gordon Pennycook, an assistant professor of behavioral science at the University of Regina; Jonathan McPhetres, a postdoc at MIT and the University of Regina who is starting a position in August as an assistant professor of psychology at Durham University; Yunhao Zhang, a PhD student at MIT Sloan; and Jackson G. Lu, the Mitsui Career Development Assistant Professor at MIT Sloan.

To conduct the study, the researchers conducted two online experiments in March, with a total of roughly 1,700 U.S. participants between them, using the survey platform Lucid. Participants matched the nation’s distribution of age, gender, ethnicity, and geographic region.

The first experiment had 853 participants, and used 15 true and 15 false news headlines about Covid-19, in the style of Facebook posts, with a headline, photo, and initial sentence from a story. The participants were split into two groups. One group was asked if the headlines were accurate; the second group was asked if they would consider sharing the posts on platforms such as Facebook and Twitter.

The first group correctly judged the stories’ accuracy about two-thirds of the time. The second group might therefore be expected to share the stories at a similar rate. However,  the participants in the second group shared about half of the true stories, and just under half of the false stories — meaning their judgment about which stories to share was almost random in regard to accuracy.

The second study, with 856 participants, used the same group of headlines and again split the participants into two groups. The first group simply looked at the headlines and decided whether or not they would share them on social media.

But the second group of participants were asked to evaluate a non-Covid-19 headline before they made decisions about sharing the larger group of Covid-19 headlines. (Both studies were focused on headlines and the single sentence of text, since most people only read headlines on social media.) That extra step, of evaluating one non-Covid-19 headline, made a substantial difference. The “discernment” score of the second group — the gap between the number of accurate and inaccurate stories they shared — was almost three times larger than that of the first group.

The researchers evaluated additional factors that might explain tendencies in the responses of the participants. They gave all participants a six-item Cognitive Reflection Test (CRT), to evaluate their propensity to analyze information, rather than relying on gut instincts; evaluated how much scientific knowledge participants had; and looked at whether respondents were located close to Covid-19 outbreaks, among other things. They found that participants who scored higher on the CRT, and knew more about science, rated headlines more accurately and shared fewer false headlines.

Those findings suggest that the way people assess news stories has less to do with, say, preset partisan views about the news, and a bit more to do with their broader cognitive habits.

“A lot of people have a very cynical take on social media and our moment in history, that we’re post-truth and no one cares about the truth any more,” Pennycook says. “Our evidence suggests it’s not that people don’t care; it’s more that they’re distracted.”

Something systemic about social media

The study follows others Rand and Pennycook have conducted about explicitly political news, which similarly suggest that cognitive habits, more so than partisan views, influence the way people judge the accuracy of news stories and lead to the sharing of misinformation. In this study, the scholars wanted to see if readers analyzed Covid-19 stories, and health information, differently than political information. But the results were generally similar to the political-news experiments the researchers have conducted.

“Our results suggest that the life-and-death stakes of Covid-19 do not make people suddenly take accuracy into [greater] account when they’re deciding what to share,” Lu says.

Indeed, Rand suggests, the very importance of Covid-19 as a subject may interfere with readers’ ability to analyze it.

“Part of the issue with health and this pandemic is that it’s very anxiety-inducing,” Rand says. “Being emotionally aroused is another thing that makes you less likely to stop and think carefully.”

Still, the central explanation, the scholars think, is simply the structure of social media, which encourages rapid browsing of news headlines, elevates splashy news items, and rewards users who post eye-catching news, by tending to give them more followers and retweets, even if those stories happen to be untrue.

“There is just something more systemic and fundamental about the social media context that distracts people from accuracy,” Rand says. “I think part of it is that you’re getting this instantaneous social feedback all the time. Every time you post something, you immediately get to see how many people liked it. And that really focuses your attention on: How many people are going to like this? Which is different from: How true is this?”

The research was supported by the Ethics and Governance of Artificial Intelligence Initiative of the Miami Foundation; the William and Flora Hewlett Foundation; the Omidyar Network; the John Templeton Foundation; the Canadian Institute of Health Research; and the Social Sciences and Humanities Research Council of Canada.

Quartz reporter Nicolás Rivero highlights a study co-authored by Prof. David Rand that examines the effectiveness of labeling fake news on social media platforms. “I think most people working in this area agree that if you put a warning label on something, that will make people believe and share it less,” says Rand. “But most stuff doesn’t get labeled, so that’s a major practical limitation of this approach.”

A study co-authored by MIT researchers finds that asking social media users to evaluate the accuracy of news headlines can reduce the spread of Covid-19 misinformation.  “Asking users to rate content gets them to think about accuracy and generates useful input for the platforms,” explains Prof. David Rand.

A tech intervention to tame tuberculosis