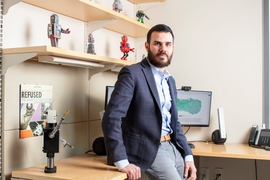 ↓ Download Image
Caption: MIT professor David Rand is a one-time punk rock guitarist whose academic research digs into psychology, cooperation, and politics. “To me, the essence of punk rock is saying, ‘Let me think about this for myself,’” Rand says. “Let me not be bound by social norms and conventions. … That’s what I try to do in my research. It’s the punk-rock approach to social science.”
Credits: Photo: M. Scott Brauer

Caption:
MIT professor David Rand is a one-time punk rock guitarist whose academic research digs into psychology, cooperation, and politics. “To me, the essence of punk rock is saying, ‘Let me think about this for myself,’” Rand says. “Let me not be bound by social norms and conventions. … That’s what I try to do in my research. It’s the punk-rock approach to social science.”
Credits:
Photo: M. Scott Brauer

What’s it like being a professor at the MIT Sloan School of Management? David Rand has an answer you might not expect.

“Being an academic is like being in a punk-rock band,” says Rand, the Erwin H. Schell Professor in MIT Sloan’s Marketing Group.

“The short version is, in both cases, you start by trying to come up with a new idea that nobody’s used before,” explains Rand, who studies human behavior, cooperation, and social networks. “In academia, it’s a good research idea, and in music it’s a cool riff or melody. Then you take that kernel and spend a lot of time developing it into this cohesive whole that you try to make a perfect as possible.”

Sounds reasonable. What happens next?

“Once that’s done, you have to capture it in a way you can share with other people, which is either writing the paper, or recording the song,” continues Rand, who also has a joint appointment with MIT's Department of Brain and Cognitive Sciences. “That’s always the most painful part. It’s always tempting to just start new projects or songs, rather than putting in the work to finish the recording you’ve already created, but you have to do it.”

Rand spent years playing guitar and bass in punk-rock bands when he was younger, but has generated hits of a different kind more recently, as a professor who writes innovative academic papers on social phenomena such as cooperation and the spread of misinformation on social media. Much of Rand’s work explores what happens when people’s behavior is guided by intuitive thinking or a more deliberative mode of cognition. With that framework in mind, he seeks to understand what decisions people will make in social settings, like whether to pay costs to help others, what news to believe and share online, and whom to vote for.

Rand is now running the academic version of a recording studio, if you will. He is the director of MIT’s Human Cooperation Laboratory and co-director of MIT’s Applied Cooperation Team — settings where he acts like a record producer, collaborating with other scholars to help them pursue their own research ideas.

For his distinctive body of research, Rand joined MIT with tenure in 2018, feeling that his work was “very MIT, very Sloan” in its emphases on networks and real-world impact.

“I visited, and once I saw what people are doing, I said, ‘This is great,’” Rand recalls. “There are so many connections between my interests and what people are working on in the marketing group, in other groups at Sloan, and across MIT generally.”

Holidays in the sun

Rand grew up in Ithaca, New York, where his father was an applied math professor at Cornell University. As an undergraduate at Cornell himself, Rand majored in computational biology. That helped him become interested in evolutionary biology — including questions about how cooperation and altruism fit in a framework of evolutionary competition.

But academia wasn’t the only thing that got Rand interested in cooperation — so did playing in punk bands, which for him included traveling down from Cornell to Florida and other places on winter break and in the summers.

“I had grown up with the basic understanding that people were by nature selfish, although my parents would say, ‘You didn’t get that from us,’” Rand reflects. “I guess it was growing up in the 1980s.”

Still, he continues, while touring with his band, “we had so many experiences of total strangers being nice to us and helping us. The parents of fans, every show, would be like, ‘Here’s some random band from New York, you can sleep on the floor, we’ll make you breakfast.’ Our van broke down and a mechanic helped us for free because he felt bad for us. It transformed my idea of human nature. At least, under the right circumstances, people can be very prosocial.”

A couple years after college, Rand was accepted into Harvard University’s PhD program in systems biology, although without, he says, a firm grasp of what he wanted to study. However, taking a class on evolutionary game theory, Rand recounts, “I fell in love with the prisoner’s dilemma,” the classic problem in which two prisoners can collectively benefit the most by cooperating, but individually benefit by pursuing their own self-interests.

Rand starting doing experiments about the prisoner’s dilemma, motivated by a simple question concerning such situations — “What do people actually do?” — and has never really stopped. Since 2008, he has co-authored over 100 peer-reviewed papers about cooperation, altruism, and the spread of ideas and behavior in networks.

In 2009, Rand earned his PhD from Harvard, and, after some postdoctoral fellowships, joined the Yale University faculty in 2013. He earned tenure from Yale in 2018. The same year, he received his job offer from MIT Sloan and joined the Institute, attracted in part by the opportunities for interdisciplinary research.

“I think there are tons of opportunities for real innovation that come from combining approaches from different disciplines,” Rand says.

However, he notes, just because interdisciplinary research may sound appealing doesn’t mean it is easy.

“I feel one of the benefits of my [academic] trajectory is I am multilingual in a scientific sense,” Rand says. “Lots of people talk about how interdisciplinarity is cool. But the thing that makes interdisciplinarity hard is that in each discipline, if you’re raised in it, you learn how to talk in that discipline’s dialect, making it surprisingly hard to collaborate with people outside of the discipline. But … I’ve spent a lot of time in each of the relevant disciplines, to learn those disciplinary languages. One of my graduates students said to me, ‘Oh yeah, you’re code-switching.’”

At MIT, Rand has been collaborating extensively with professor of political science Adam Berinsky, who also runs experiments about political misinformation. Working with a collection of graduate students from across MIT, they have been investigating misinformation and social media.

In one project, conducted in coordination with Facebook, they have been testing whether social media platforms can survey their users to crowdsource fact-checking.

In another, they found that video was not much more persuasive than text. “There is a great deal of panic right now about how AI can be used to make ‘deepfakes,’ very convincingly doctored videos,” Rand says. “But our work suggests that these concerns may be a bit premature. It’s really important to do empirical tests about what matters and what approaches will be effective, rather than just going off our intuitions.”

Wherever his academic work takes him, Rand likes to circle back to music as a source of inspiration.

“To me the essence of punk rock is saying, ‘Let me think about this for myself,’” Rand says. “Let me not be bound by social norms and conventions. … That’s what I try to do in my research. It’s the punk-rock approach to social science.”

Moreover, Rand concludes, in academia, thinking about one’s research as art helps shape it for the better.

“If the reason that I’m doing this is that I’m trying to make something beautiful, I’m like a perfectionist, with a good level of perfectionism in my science,” he says. “It’s not tempting to cut corners or be sloppy when you’re doing it for yourself, because then it makes things unsatisfying. You want results that are as true, and therefore as beautiful, as possible.”

Writing for the Financial Times, Prof. David Rand explores how social media platforms could channel partisan motivations to help moderate the spread of misinformation online. “Combating misinformation is a challenge requiring a wide range of approaches,” writes Rand. “Our work suggests that an important route for social media companies to save democracy from misinformation is to democratize the moderation process itself.”

A tech intervention to tame tuberculosis