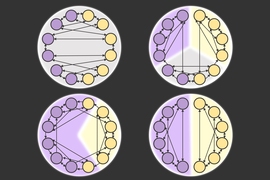 ↓ Download Image
Caption: A new study co-authored by MIT scholars examines the impact of political information on voter behavior, under a variety of conditions. The schematic images here represent voter information networks, ranging from those with connections across political parties, upper left, to those with no contact between opposing party members, bottom right.
Credits: Image: Courtesy of the researchers

Caption:
A new study co-authored by MIT scholars examines the impact of political information on voter behavior, under a variety of conditions. The schematic images here represent voter information networks, ranging from those with connections across political parties, upper left, to those with no contact between opposing party members, bottom right.
Credits:
Image: Courtesy of the researchers

Many voters today seem to live in partisan bubbles, where they receive only partial information about how others feel regarding political issues. Now, an experiment developed in part by MIT researchers sheds light on how this phenomenon influences people when they vote.

The experiment, which placed participants in simulated elections, found not only that communication networks (such as social media) can distort voters’ perceptions of how others plan to vote, but also that this distortion can increase the chance of electoral deadlock or bias overall election outcomes in favor of one party.

“The structure of information networks can really fundamentally influence the outcomes of elections,” says David Rand, an associate professor at the MIT Sloan School of Management and a co-author of a new paper detailing the study. “It can make a big difference and is an issue people should be taking seriously.”

More specifically, the study found that “information gerrymandering” can bias the outcome of a vote, such that one party wins up to 60 percent of the time in simulated elections of two-party situations where the opposing groups are equally popular. In a follow-up empirical study of the U.S. federal government and eight European legislative bodies, the researchers also identified actual information networks that show similar patterns, with structures that could skew over 10 percent of the vote in the study’s experiments.

The paper, “Information gerrymandering and undemocratic decisions,” is being published today in Nature.

The authors are Alexander J. Stewart of the University of Houston; Mohsen Mosleh, a research scientist at MIT Sloan; Marina Diakonova of the Environmental Change Institute at Oxford University; Antonio Arechar, an associate research scientist at MIT Sloan and a researcher at the Center for Research and Teaching in Economics (CIDE) in Aguascalientes, Mexico; Rand, who is also the principal investigator for MIT Sloan’s Human Cooperation Lab; and Joshua B. Plotkin of the University of Pennsylvania. Stewart is the lead author.

While there is a burgeoning academic literature on media preferences, political ideology, and voter choices, the current study is an effort to create general models of the fundamental influence that information networks can have. Through abstract mathematical models and experiments, the researchers can analyze how strongly networks can influence voter behavior, even when long-established layers of voter identity and ideology are removed from the political arena.

“Part of the contribution here is to try to formalize how information about politics flows through social networks, and how that can influence voters’ decisions,” says Stewart.

The study used experiments involving 2,520 particpants, who played a “voter game” in one of a variety of conditions. (The participants were recruited via Amazon’s Mechanical Turk platform and took part in the simulated elections via Breadboard, a platform generating multiplayer network interactions.) The players were divided into two teams, a “yellow” team and a “purple” team, usually with 24 people on each side, and were allowed to change their voting intentions in response to continuously updated polling data.

The participants also had incentives to try to produce certain vote outcomes reflective of what the authors call a “compromise worldview.” For instance, players would receive a (modest) payoff if their team received a super-majority vote share; a smaller payoff if the other team earned a super-majority; and zero payoff if neither team reached that threshold. The election games usually lasted four minutes, during which time each voter had to decide how to vote.

During a baseline series of election games where all the players had unbiased, random polling information, each side won roughly a quarter of the time, and a deadlock without a super-majority resulted about half the time. But the researchers also varied the game in multiple ways. In one iteration of the game, they added information gerrymandering to the polls, such that some members of one team were placed inside the other team’s echo chamber. In another iteration, the research team deployed online bots, comprising about 20 percent of voters, to behave like “zealots,” as the scholars called them; the bots would strongly support one side only.

After months of iterations of the game, the researchers concluded that election outcomes could be heavily biased by the ways in which the polling information was distributed over the networks, and by the actions of the zealot bots. When members of one party were led to believe that most others were voting for the other party, they often switched their votes to avoid deadlock.

“The network experiments are important, because they allow us to test the predictions of the mathematical models,” says Mosleh, who led the experimental portion of the research “When we added echo chambers, we saw that deadlock happened much more often — and, more importantly, we saw that information gerrymandering biased the election results in favor of one party over the other.”

As part of the larger project, the team also sought out some empirical information about similar scenarios among elected governments. There are many instances where elected officials might either support their first-choice legislation, settle for a cross-partisan compromise, or remain in deadlock. In those cases, having unbiased information about the voting intentions of other legislators would seem to be very important.

Looking at the co-sponsorship of bills in the U.S. Congress from 1973 to 2007, the researchers found that the Democratic Party had greater “influence assortment” — more exposure to the voting intentions of people in their own party — than the Republican Party of the same time. However, after Republicans gained control of Congress in 1994, their own influence assortment became equivalent to that of the Democrats, as part of a highly polarized pair of legislative influence networks. The researchers found similar levels of polarization in the influence networks of six out of the eight European parliaments they evaluated, generally during the last decade.

Rand says he hopes the current study will help generate additional research by other scholars who want to keep exploring these dynamics empirically.

“Our hope is that laying out this information gerrymandering theory, and introducing this voter game, we will spur new research around these topics to understand how these effects play out in real-world networks,” Rand says.

Support for the research was provided by the U.S. Defense Advanced Research Projects Agency, the Ethics and Governance of Artificial Intelligence Initiative of the Miami Foundation, the Templeton World Charity Foundation and the John Templeton Foundation, the Army Research Office, and the David and Lucile Packard Foundation.

Special effects: How a movie could reduce corruption

Breaking up with political brokers, citizens may find electoral independence