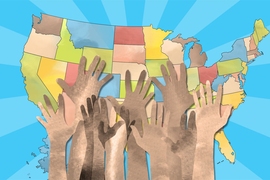 ↓ Download Image
Caption: A new study co-authored by an MIT political scientist shows that state policies in the U.S. from 1936 through 2014 have been responsive to public opinion — and have become even more aligned with it in recent decades.
Credits: Illustration: Christine Daniloff/MIT

Caption:
A new study co-authored by an MIT political scientist shows that state policies in the U.S. from 1936 through 2014 have been responsive to public opinion — and have become even more aligned with it in recent decades.
Credits:
Illustration: Christine Daniloff/MIT

In politics, your voices make a difference.

At least at the state level of U.S. politics, that is. A new study co-authored by an MIT political scientist shows that state policies in the U.S. from 1936 through 2014 have been responsive to public opinion — and have become even more aligned with it in recent decades.

“Responsiveness to public opinion has grown over time,” says Devin Caughey, an associate professor of political science at MIT and co-author of a newly published paper detailing the findings.

And while the existence of a clear relationship between public sentiment and policy might be “sort of surprising” to some observers, Caughey adds, “If you didn’t find any responsiveness at all, it would be pretty concerning.”

The study turned up a number of related findings as well. State-level government responsiveness to public opinion has varied across regions in recent decades; is stronger outside the South; and does not seem to derive directly from structural reforms to government. Policy changes tend not to happen quickly, either, the researchers observed.

“Large policy shifts are the result of the cumulation of incremental responsiveness over many years,” the authors write in the paper.

The paper, “Policy Preferences and Policy Changes: Dynamic Responsiveness in the American States, 1936­–2014,” appears in the May issue of the American Political Science Review. The authors are Caughey and Christopher Warshaw, an assistant professor of political science at George Washington University.

To conduct the research, Caughey and Warshaw drew on a dataset they constructed containing about 1.5 million individual citizens’ answers to polling questions regarding more than 300 policy issues, from 1936 through 2014. The scholars made a distinction in the study between economic and social issues, given that states have “less policymaking discretion on economic issues.”

Looking at the trends in state-level politics over the study’s time period, a key inflection point appears to be the early 1970s, a period after which the governmental response to shifts in opinion appears to be much more pronounced.

“On both social and economic issues, dynamic responsiveness appears to be stronger after 1972,” the authors write in the paper.

However, this varies across regions of the U.S., with different policymaking trajectories in different parts of the country. Governmental responsiveness has been higher outside of the South since the 1970s, for instance, especially on economic issues. Prior to the 1970s, both the South and other regions were equally responsive — or unresponsive, as the case may be — to public opinion.

This also suggests a “puzzling finding” arising from the data, as the scholars note: Policymaking responsiveness did not seem drastically altered by the political reforms in the South in the 1960s, including expanded voting rights, the elimination of poll taxes, and more.

“On the whole, we find little evidence that any of the institutions we consider moderate the effect of opinion on policy” in the South since the 1970s, the authors write, adding that “[t]his is clearly an area where more research is needed.”

The paper is the latest publication stemming from a roughly five-year research effort by Caughey and Warshaw that has examined state-level policymaking from 1936–2014. Previous papers in the series have examined, among other things, whether or not state-level policy has shifted at all, in ideological terms.

The research was assisted by a team of students in MIT’s Undergraduate Research Opportunities Program (UROP), who performed data collection work. Warshaw was also a professor at MIT when much of the project was completed.

The evidence from the study does support one relatively contrarian idea: That the changes in state policies are not primarily caused by changes in party control of state governments. In political science terms, this means the changes in policy are not so much driven by “selection” — of officials from parties — but “adaptation” to public opinion.

“We didn’t find much evidence that [responsiveness] was channeled through turnover in parties,” Caughey says. That runs contrary to the views of some other political scientists, and possibly runs counter to the popular perception of partisan state-level politics today.

But Caughey notes that a few well-publicized cases of states shifting direction after a change in party control do not outweigh the bulk of other cases. And the study’s findings also suggest that even when parties have a solid grip on power, they are still listening to what voters think.

“Even if there’s no change in party control, incumbent officials are paying attention to what voters want and are adapting on the margins to changes in public opinion,” Caughey says.

The study received research support from the dean of the School of Humanities, Arts, and Social Sciences at MIT.