Urban politicians in the U.S. are responsive to voters’ views, regardless of the form of government.
Peter Dizikes | MIT News Office
Publication Date:
Press Inquiries 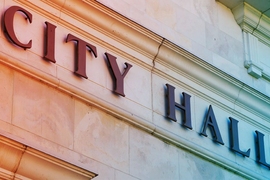 Political scientists have long wondered whether city governments in the United States are really responsive to their voters. Aren’t local governments simply mired in machine politics, or under the sway of local big-money interests? Does ideology matter?

Now a uniquely comprehensive study co-authored by an MIT political scientist has produced a pair of distinctive findings: first, that the policies of city governments do closely match the politics of their citizens, and second, that this occurs regardless of the exact form of government than a city has.

That means that urban governance is more flexible, adaptable, and representative than the popular image might suggest. It also indicates that the link between public opinion and policy outcomes in municipal government is independent of whether it is led by a mayor, a town council, or selectmen, or uses direct referendums as opposed to indirect representatives.

“Politics doesn’t look quite as different at the local level as people thought it did,” says Chris Warshaw, an assistant professor of political science at MIT, and an author of a new paper detailing the findings of the study.

The research is singularly broad, examining the policies of every U.S. city and town with a population of 20,000 or more. It breaks new ground by extensively examining, on the municipal front, what researchers have found to be true of federal and state governments: that the views of the people usually matter significantly in shaping political action.

Or, as the researchers say in their new paper on the subject, there is a “robust role for citizen policy preferences in determining municipal policy outcomes.”

All politics is not just local, but ideological

The paper, “Representation in Municipal Government,” appears in the latest issue of the American Political Science Review. It was written by Warshaw and Chris Tausanovitch, an assistant professor of political science at the University of California at Los Angeles.

The study links data from seven large-scale surveys, taken from 2000 through 2011, each of which asked 30,000 to 80,000 American voters their views on a wide range of policy questions. To further enhance the measurement of policy preferences among voters, the researchers also incorporated models that estimate preferences based on demographic and geographic information, and looked at other data, such as on presidential vote results in cities and towns.

The study examined 1,600 American municipalities. San Francisco, Seattle, and Washington ranked as the most liberal cities with 250,000 or more people, while Mesa, Ariz., Oklahoma City, and Virginia Beach, Va., were rated as the most conservative.

To see if voter preferences matched the policies that municipal governments enacted, Warshaw and Tausanovitch used a wide variety of data sources to rate the policy choices enacted by local governments, often involving spending and taxes. “The substantively consequential policies are the ones we look at,” Warshaw says.

The researchers also controlled for cities’ fiscal health, since well-off municipalities can afford to spend more on public projects and regulations than poorer towns and cities.

Even accounting for such factors, Warshaw and Tausanovitch found that liberal cities tend to both tax and spend more, while having “less regressive tax systems,” with a lower share of revenues from sales taxes. This strong correlation, they found, persists whatever the form of local government.

So while people like to say that “all politics is local,” Warshaw thinks we should amend that view. The notion that “idiosyncratic local political battles, about zoning, land, growth, and fixing potholes, is the core of city politics,” as he puts it, is not quite wrong; it’s just that the battles over such things also occur within the same ideological spectrum that applies to state and federal politics.

Other scholars have taken note of the paper. Marc Meredith, an assistant professor of political science at the University of Pennsylvania, says he finds the study to be “very convincing.” While it is often hard to convince scholars of a “null result” — in this case, that the form of local government does not affect its policy outcomes — the sheer amount of data, Meredith notes, helps make the study persuasive. Among other things, he suggests, future studies could build on this one by looking at specific spending programs in a more granular way, and seeing if this study’s findings hold.

Dan Hopkins, an associate professor of political science at Georgetown University, says it is “an excellent paper” that “fills a long-standing gap in how we understand American cities.” Future research, he suggests, could examine the variation in spending within cities, and also attempt to discern whether local policies on other types of issues — law enforcement tactics, immigration, and other social issues — match voter preferences.

Warshaw notes that more research could be conducted on the causal mechanisms that make cities broadly responsive to public opinion. “My hope is this will inspire other people to go out and fill in those mechanisms,” he says.

Methodologically, he suggests, the variation in the structures of city governments, among other things, might allow scholars to further compare and contrast otherwise similar groups of municipalities.

“Given that we know the powers of cities vary a lot in different states, an obvious piece of variation to explore is that in states that give more discretion to cities, you [might] get different outcomes,” Warshaw says. “By utilizing that variation across the country, you can start to get into those questions.”

Patrick J. Egan writes for The Washington Post about the racial diversity of police forces. In examining how politics may influence the makeup of a police force, Egan highlights a study co-authored by Prof. Chris Warshaw that found that municipal governments tend to adapt to voters’ views.

Salon reporter Allegra Kirkland reports on a study co-authored by MIT Professor Chris Warshaw that examined the political leanings of cities across America. The researchers found that “ideology has tangible effects on policy at the municipal level,” Kirkland writes.

Forbes reporter Naomi Shavin writes about the new MIT study that found that municipal governments accurately represent their residents’ political beliefs. The study also showed that “the most conservative cities are skewed toward being more liberal than one might expect,” Shavin writes.

“In a recent study, Boston was ranked the fifth most liberal city in the United States,” writes Megan Turchi for Boston.com about new research conducted by Professor Chris Warshaw. Warshaw’s study examined how closely aligned urban governments are with their constituents’ viewpoints and ranked the most liberal and conservative cities.

WBUR’s Benjamin Swasey reports on Professor Chris Warshaw’s new study examining how reflective governments are of their constituents’ views. “When you put all this stuff together, it turns out that cities are quite responsive to how liberal their publics are,” explains Warshaw.

Writing for The Washington Post, Hunter Schwartz reports on new findings concerning municipal governments from Professor Chris Warshaw. Schwartz writes that the study found, “Even cities with governments designed to be less partisan, with institutions like nonpartisan elections and professional managers instead of elected mayors, are in line with residents’ political beliefs.”

In a piece for USA Today, Mark Olalde reports on a new study of municipal politics co-written by MIT Professor Chris Warshaw. Through the study, which examined the political preferences of U.S. residents in specific cities, Warshaw found that Mesa, Arizona was the most conservative city and San Francisco, California the most liberal.

The Economist highlights a new study by Prof. Chris Warshaw that analyzed how accurately the policies of local leaders reflect their constituents’ views. “They found that the most ideologically liberal cities end up spending twice per capita as much as the most conservative cities, have higher taxes and less regressive tax systems,” The Economist reports.

Sam Sturgis of CityLab examines a new study by MIT Professor Chris Warshaw that shows that municipal governments, regardless of their structure, tend to mirror the ideological preferences of their electorate. The researchers, “aggregated a collection of nationwide survey results to determine the political leanings of 1,600 U.S. cities and towns,” Sturgis writes.