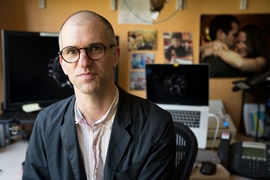 The onset of the Covid-19 pandemic has brought a new kind of public health crisis to the U.S. — and a new struggle to grasp the nature of the threat. Professor Seth Mnookin studies how the public processes and responds to information about infectious diseases, a focus of his award-winning book, “The Panic Virus: The True Story Behind the Vaccine-Autism Controversy.” To discuss the public understanding of the current situation, MIT News talked with Mnookin, who is also the director of the MIT Graduate Program in Science Writing and a professor in MIT’s  Comparative Media Studies/Writing program.

Q: Broadly speaking, what jumps out at you about the reaction to public health guidance and scientific information in the U.S. so far?

A: One thing we are definitely seeing now is there is a danger in devaluing scientific expertise, and science in general, and it can be hard to turn that on and off. There has been such a concerted effort in the country over the last several decades to put the scientific consensus into doubt over a whole range of issues, from the safety of childhood vaccines to the environmental crisis, and then, when there is a life-or-death, immediate threat, it can be difficult to suddenly say, “We [science skeptics] were raising questions about all this other stuff, but now you [the public] need to listen.” I think what we’re seeing is that the response is varying a lot in different parts of the country, in many cases according to the political leanings of an area or a region. And that’s going to cause real problems for the country.

Q: What could change that, apart from a massive growth of cases?

A: As bad as it has gotten — the United States has more cases of coronavirus than anywhere else in the world and that is only going to increase [for some time] — we still have not reached the point where there are apocalyptic-type images that could serve to make clear the full extent of the danger and the risk. We have not seen convention centers repurposed as morgues. We have not seen bodies piling up at hospitals.

Q: Since you mention that, some historians and other observers have contended that a few indelible images of the war in Vietnam made a big difference in public perception of it. Is it possible there might be parallels here?

A: Yes. Although I think a big difference between Vietnam and now is that while the country was obviously incredibly divided then, there was still a sort of shared basis for reality. You had the “big three” news networks; you had a couple of national papers that in turn provided a lot of content to local papers. So, while there were disagreements about how to interpret what was going on, there weren’t the same kind of disagreements about the nature of reality. And I think that really has changed everything.

Now we’ve seen debates about whether [news coverage] is a hoax, about whether images from the United States and elsewhere in the world are fake images. It’s conceivable we could have those [graphic] images, and still they don’t have the effect we expect because there is a not-insignificant portion of the population that just refuses to believe anything that does not fit their preconceived notion of how the world works.

Still, this is unlike anything that anyone alive has ever been through, and will change our world in ways that are not only impossible to predict, but at this point are impossible to imagine. So in a way that also makes me hesitant to say that the trajectory that we’re on is irreversible, or that what’s going on now is fated to be the new normal.

Q: Do you think people have a different view about this crisis when it hits their own communities, though?

A: Absolutely. But that’s one of the things that is scary, when you look at the places in the country that have not yet been as hard-hit, in many cases those are places you would think are predisposed to [downplaying] the situation. … And I think it’s going to be difficult for some of these governors and local leaders to reverse course, and expect that their constituencies and citizens are going to be able to reverse course quickly.

Q: Otherwise, apart from personal experience, it’s hard to see a way around this problem of media-driven competing realities.

A: Yes. But it wasn’t that long ago that there actually was [greater] consensus on something like the environment. Under George H.W. Bush, the environment was an issue that was more like Vietnam, and less like it is today, in that there were disagreements about the problem, but there were not disagreements that it was happening. And that change has been incredibly damaging. If you want to look for a ray of hope in this, it’s that the shift to turning reality into a partisan issue has been relatively quick, and seismic events brings about seismic changes. I don’t think it’s a complete fantasy to think this crisis could produce that type of effect in reverse. For that to happen, there needs to be some real agreement that it is better for our society if we acknowledge the expertise of scientists and embrace all the information and facts we can get. I don’t know if I would bet on that happening, but it’s not out of the realm of possibility.

Q&A: Seth Mnookin on the fallacy of “both sides” journalism