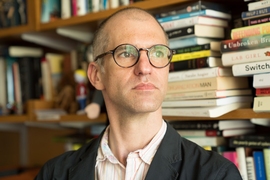 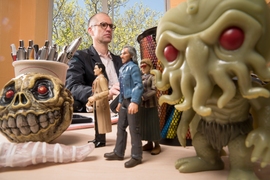 As an undergraduate, Seth Mnookin went through five or six different majors before finally settling on history and science — an apt combination for someone who would end up heading MIT’s Graduate Program in Science Writing, as he does now. But there was a long road in between these endpoints.

“I didn’t think I had the skills to be a bench scientist,” Mnookin recalls, “but science was something that fascinated me.” At the same time, he says, “I knew since high school that I wanted to be a journalist.”

At Newton North High School in Newton, Massachusetts, he worked on the school paper, where he says he learned more from the paper’s advisor, Helen Smith, than he has “from any other person.” Smith imparted to her students the importance of attention to detail, Mnookin recalls, by “treating our paper as if it was The New York Times. … She really laid the foundations [and showed] that being a reporter gave you a way to go anywhere, talk to anyone.”

Mnookin pursued a dual history and science major as an undergraduate at Harvard University, which, he says, “allowed me to focus on science through a humanities lens.” That combination worked well for him, leading to a career as a writer for prestigious publications and eventually to penning award-winning books including “The Panic Virus,” about the erroneous belief that vaccines contributed to a rise in autism cases.

It wasn’t all science along the way, though. “I didn’t do anything with my degree for about 15 years,” Mnookin says. Instead, he covered very different topics, including the amazing rise of the Red Sox to win their first World Series in nearly a century, in his book “Feeding the Monster: How Money, Smarts, and Nerve Took a Team to the Top.” Earlier, he wrote about journalism, in his 2004 book “Hard News: The Scandals at The New York Times and Their Meaning for American Media,” which was named by The Washington Post as a best book of the year.

Mnookin started his journalism career as a freelance rock and jazz critic before joining The Palm Beach Post in Florida as a crime and metro reporter in 1997. In 1999 he moved to New York City, where he covered City Hall for The Forward, a Jewish weekly newspaper. The following year, he was hired by Brill’s Content to cover the 2000 presidential campaign.

He describes that campaign as a great introduction to political coverage, which found him riding on press planes with people who had been covering politics since John F. Kennedy’s campaign and later the Watergate scandal. “It was an incredible experience,” he recalls. Among other things, “I got to interview [Bill] Clinton in the Oval Office.”

After Brill’s Content closed shortly after Sept. 11, Mnookin was hired as a senior writer at Newsweek, where he covered the media.

Soon, a series of scandals rocked the journalism world, involving plagiarism and falsified interviews with people who turned out not to exist. Jayson Blair at The New York Times, for example, was found to have invented sources for numerous stories. “I had been skeptical” about the leadership at the Times in those days, he says, and that led to his first book, “Hard News,” which was an account of those events.

After that project, as he was wondering about what to write as a second book project, “a fortuitous confluence of events” led Mnookin to follow the progress of a new young general manager: local boy Theo Epstein, who had taken over at the Red Sox, vowing that “this is the year they’re going to win” after having failed to win a World Series since 1918.

“I spent a year living with the team,” Mnookin says, a period that included the amazing come-from-behind win of the 2004 series. The book came out in the summer of 2006 and made the Times best-seller list in its first week. The fact that the book did so well, Mnookin says, had “less to do with me, and more about the fact that people like to read about winning sports teams.” The success of that book, he says, “gave me more freedom to choose what’s next.”

He had previously interviewed for science writing positions, including at The Wall Street Journal, and “I knew that was something I wanted to get back into.” He started looking into what was then heating up as an intense controversy: the now thoroughly debunked notion that vaccines were contributing to a rise in autism rates. That became the subject of his next book, “The Panic Virus,” which he says took him longer to write and required more discipline than anything he had done before.

He says the reason he finds writing about science so attractive, compared to, say, music, which he also loves to write about, is that “science was a difficult type of challenge. It pushes me to constantly go out of my comfort zone. You’re always learning about new things, and I think that’s the coolest part about being a journalist.”

Mnookin joined MIT in 2011, first as a lecturer in the Graduate Program in Science Writing. The following year, he was hired as an assistant professor and became the program's co-director. In 2016 he became the director of that program and and the following year was promoted to professor of science writing in the Comparative Media Studies/Writing program. “What we do here is a little bit different” than at many other journalism schools, he says, stressing the importance of providing students with real-world journalistic experiences and giving them the hands-on knowledge that he says is indispensable in today’s journalism world.

These days, with newspapers declining and fewer entry-level jobs in the business, he says, “it’s much more difficult to just pop in and learn on the job — to understand what the null principle is, or to get a study and immediately focus on what the shortcomings are, [or to ask,] ‘is the sample size sufficient for the conclusions the authors claim?’ That kind of stuff can be pretty difficult to learn on the job.”

Since he’s been the director, the science writing program has added some new modules to its curriculum every year, he says, including one on podcasting and another on data journalism. “We want to constantly update ourselves,” including finding more ways to help fund students’ learning and find them employment opportunities.

Mnookin has also been collaborating with Deborah Blum, director of MIT’s Knight Science Journalism Fellowship Program, to find ways for the two programs to work together. Each year, four students from the graduate program work as editorial interns for Undark, a magazine Blum runs out of the Knight program. The students also write profiles of all Knight fellows each year as a way for the two groups to get to know each other.

In addition to his academic work, Mnookin has met with MIT students struggling with drug-use issues, and has served as a resource for Student Support Services. He's motivated by personal experiences with drug-use disorders, which stretched from high school through his mid-twenties. “I almost died as a result of heroin dependency,” he says.

Outside of MIT, Mnookin spends his free time with his wife Sara and their two children, Max and Eliza. They love music and go to a lot of concerts together, says Mnookin, who also enjoys playing the mandolin.

Q&A: Seth Mnookin on the fallacy of “both sides” journalism