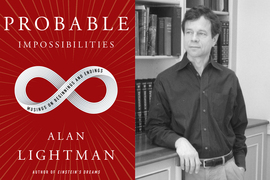 ↓ Download Image
Caption: Alan Lightman is a professor of the practice of the humanities at MIT.
Credits: Cover image courtesy of Pantheon

Caption:
Alan Lightman is a professor of the practice of the humanities at MIT.
Credits:
Cover image courtesy of Pantheon

In 1929, astronomer Edwin Hubble, using data from the Mount Wilson Observatory in California, found that the universe is expanding. This was “probably the most important cosmic discovery of all time,” writes Alan Lightman in his new book, “Probable Impossibilities: Musings on Beginnings and Endings.” Certainly it is among the most thought-provoking.

Hubble’s discovery complicates how we grasp space and time. Can you picture a universe that expands infinitely? And if it is expanding, it must have had a starting point in time. But what existed before that, and how did things get started?

If you find your own mind being warped by these problems, Lightman’s new book signals a message: You are not alone. “Probable Impossibilities,” published this month by Penguin RandomHouse, is a companion for readers who like to ponder how the universe evolved, how life on Earth started, or how some chemical elements could create consciousness.

In so doing, Lightman’s book grapples with a slightly paradoxical feature of science. Over the last 125 years especially, empirical research has been sensationally successful. But that has not led to something like a complete understanding of the universe. It has instead rearranged the frontiers of knowledge, some of which, such as quantum physics, repel our intuition.

After all, empirical evidence strongly supports the idea of the Big Bang and aligns nicely with inflation theory, the notion that there was a phenomenally rapid early expansion and cooling of the universe. But the question of what caused the Big Bang may reside in the quantum realm. The evidence suggests the contents of our universe were condensed into one subatomic bit of matter; perhaps some quantum action created that particle, leading to its subsequent expansion.

In the book, Lightman talks to Tufts University cosmologist Alexander Vilenkin, who refers to the way subatomic particles seem to suddenly appear in multiple places at once, and notes, “No cause is required to create a universe from quantum tunneling.” That is, a random quantum event may have generated the matter we now inhabit.

Our intuitions cannot completely grasp this, but science allows us to reason through its implications. As Lightman explores in the book, Stanford University physicist Andrei Linde, one pioneer of inflation research, proposes that there is “eternal chaotic inflation,” in which many universes are often being generated. Alan Guth, the MIT physicist whose work was vital to the development of inflation theory, also believes we are in a multiverse. As Lightman discusses in the book, Guth and Caltech cosmologist Sean Carroll have been attempting to formalize a corresponding account of time, in which the direction of time is linked to the increasing disorder of an expanding universe, and would be reversed under the opposite circumstances.

A key point here is that grappling with seemingly unanswerable questions isn’t an end point; it’s a spur for productive thinking.

“Modern science has been able to take questions that were formerly considered purely philosophical and address them through experiments and observations and theories,” Lightman says. “Maybe it’s inevitable that once you [generate] questions that are big enough, you go beyond your ability to test them.”

Lightman himself is comfortable with the idea that some form of quantum event touched off our universe’s development.

“Before our universe began with our Big Bang, 13.8 billion years ago, there was probably some kind of quantum space and time, although it may not have been anything we can relate to space and time in our world,” Lightman says. “And with fluctuations in the energy field, [perhaps] some little universes popped into existence, the way we can create particles from energy in a lab. Some of those universes had the right initial conditions to expand, and one of them became our universe. That’s what I think happened, but I would tell a person to read about quantum physics to appreciate the strangeness of nature and its possibilities.”

Lightman has a PhD physics, studied with Kip Thorne at Caltech, and did research in astrophysics before focusing on his writing. But in “Probable Impossibilities,” Lightman also branches out into biology — examining, for instance, the work of Harvard University’s Jack Szostak, a leader in origins-of-life research. Lightman also touches on the mysteries of consciousness, citing the philosopher Colin McGinn’s view that, as Lightman writes, “we can never understand consciousness because we can never get outside of our minds to do the analysis.”

Overall, Lightman says, “I think it’s going to be easier to understand how a living organism emerged out of primitive chemicals than how consciousness itself emerges from a material brain. … In terms of a very, very, primitive single-cell form of life, I think we will definitely be able to do that in the next 50 years or so.”

So far, “Probable Impossibilities” has received praise from reviewers. The book is “a beautiful argument against the old Romantic-era notion that science kills wonder. In the hands of Lightman, science only multiplies it,” the science journalist Sam Kean wrote in a review in The American Scholar.

Lightman hopes readers will be drawn to both the profound mysteries of our origins and the ingenuity of today’s researchers.

“Even though we are billions of times larger than atoms, we can do experiments and work up equations and theories that describe the world of the atom,” Lightman says. “And we’re able to probe the distant universe and understand what happened billions of light years away and build a theory of how the universe got to be here, far beyond our limited sensory expectations. It is a triumph of the mind that we understand as much as we do.”

Prof. Alan Lightman’s new book, “Probable Impossibilities: Musings on Beginnings and Endings” tackles “big questions like the origin of the universe and the nature of consciousness, always in an entertaining and easily digestible way,” writes Andrew Crumey for The Wall Street Journal.