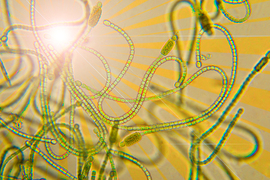 Some time in Earth’s early history, the planet took a turn toward habitability when a group of enterprising microbes known as cyanobacteria evolved oxygenic photosynthesis — the ability to turn light and water into energy, releasing oxygen in the process.

This evolutionary moment made it possible for oxygen to eventually accumulate in the atmosphere and oceans, setting off a domino effect of diversification and shaping the uniquely habitable planet we know today.

Now, MIT scientists have a precise estimate for when cyanobacteria, and oxygenic photosynthesis, first originated. Their results appear today in the Proceedings of the Royal Society B.

Interestingly, this estimate places the appearance of oxygenic photosynthesis at least 400 million years before the Great Oxidation Event, a period in which the Earth’s atmosphere and oceans first experienced a rise in oxygen. This suggests that cyanobacteria may have evolved the ability to produce oxygen early on, but that it took a while for this oxygen to really take hold in the environment.

“In evolution, things always start small,” says lead author Greg Fournier, associate professor of geobiology in MIT’s Department of Earth, Atmospheric and Planetary Sciences. “Even though there’s evidence for early oxygenic photosynthesis — which is the single most important and really amazing evolutionary innovation on Earth — it still took hundreds of millions of years for it to take off.”

Estimates for the origin of oxygenic photosynthesis vary widely, along with the methods to trace its evolution.

For instance, scientists can use geochemical tools to look for traces of oxidized elements in ancient rocks. These methods have found hints that oxygen was present as early as 3.5 billion years ago — a sign that oxygenic photosynthesis may have been the source, although other sources are also possible.

Researchers have also used molecular clock dating, which uses the genetic sequences of microbes today to trace back changes in genes through evolutionary history. Based on these sequences, researchers then use models to estimate the rate at which genetic changes occur, to trace when groups of organisms first evolved. But molecular clock dating is limited by the quality of ancient fossils, and the chosen rate model, which can produce different age estimates, depending on the rate that is assumed.

Fournier says different age estimates can imply conflicting evolutionary narratives. For instance, some analyses suggest oxygenic photosynthesis evolved very early on and progressed “like a slow fuse,” while others indicate it appeared much later and then “took off like wildfire” to trigger the Great Oxidation Event and the accumulation of oxygen in the biosphere.

“In order for us to understand the history of habitability on Earth, it’s important for us to distinguish between these hypotheses,” he says.

To precisely date the origin of cyanobacteria and oxygenic photosynthesis, Fournier and his colleagues paired molecular clock dating with horizontal gene transfer — an independent method that doesn’t rely entirely on fossils or rate assumptions.

Normally, an organism inherits a gene “vertically,” when it is passed down from the organism’s parent. In rare instances, a gene can also jump from one species to another, distantly related species. For instance, one cell may eat another, and in the process incorporate some new genes into its genome.

When such a horizontal gene transfer history is found, it’s clear that the group of organisms that acquired the gene is evolutionarily younger than the group from which the gene originated. Fournier reasoned that such instances could be used to determine the relative ages between certain bacterial groups. The ages for these groups could then be compared with the ages that various molecular clock models predict. The model that comes closest would likely be the most accurate, and could then be used to precisely estimate the age of other bacterial species — specifically, cyanobacteria.

Fournier ran this model to estimate the age of the “crown” group of cyanobacteria, which encompasses all the species living today and known to exhibit oxygenic photosynthesis. They found that, during the Archean eon, the crown group originated around 2.9 billion years ago, while cyanobacteria as a whole branched off from other bacteria around 3.4 billion years ago. This strongly suggests that oxygenic photosynthesis was already happening 500 million years before the Great Oxidation Event (GOE), and that cyanobacteria were producing oxygen for quite a long time before it accumulated in the atmosphere.

The analysis also revealed that, shortly before the GOE, around 2.4 billion years ago, cyanobacteria experienced a burst of diversification. This implies that a rapid expansion of cyanobacteria may have tipped the Earth into the GOE and launched oxygen into the atmosphere.

“This new paper sheds essential new light on Earth’s oxygenation history by bridging, in novel ways, the fossil record with genomic data, including horizontal gene transfers,” says Timothy Lyons, professor of biogeochemistry at the University of California at Riverside. “The results speak to the beginnings of biological oxygen production and its ecological significance, in ways that provide vital constraints on the patterns and controls on the earliest oxygenation of the oceans and later accumulations in the atmosphere.”

Fournier plans to apply horizontal gene transfer beyond cyanobacteria to pin down the origins of other elusive species.

“This work shows that molecular clocks incorporating horizontal gene transfers (HGTs) promise to reliably provide the ages of groups across the entire tree of life, even for ancient microbes that have left no fossil record … something that was previously impossible,” Fournier says.

This research was supported, in part, by the Simons Foundation and the National Science Foundation.

Investigating the rise of oxygenic photosynthesis

New technique pinpoints milestones in the evolution of bacteria

Determining the timing of methanogen evolution

A genomic take on geobiology