As atmospheric concentrations of CFC-11 drop, the global ocean should become a source of the chemical by the middle of next century.
Watch Video
Listen
Jennifer Chu | MIT News Office
Publication Date:
Press Inquiries 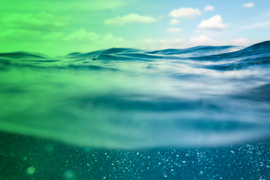 ↓ Download Image
Caption: The ocean, a longtime reservoir for CFC-11, will become a source of the ozone-depleting chemical by middle of next century, a new MIT study finds.
Credits: Image: iStockphoto

Caption:
The ocean, a longtime reservoir for CFC-11, will become a source of the ozone-depleting chemical by middle of next century, a new MIT study finds.
Credits:
Image: iStockphoto

The world’s oceans are a vast repository for gases including ozone-depleting chlorofluorocarbons, or CFCs. They absorb these gases from the atmosphere and draw them down to the deep, where they can remain sequestered for centuries and more.

Marine CFCs have long been used as tracers to study ocean currents, but their impact on atmospheric concentrations was assumed to be negligible. Now, MIT researchers have found the oceanic fluxes of at least one type of CFC, known as CFC-11, do in fact affect atmospheric concentrations. In a study appearing today in the Proceedings of the National Academy of Sciences, the team reports that the global ocean will reverse its longtime role as a sink for the potent ozone-depleting chemical.

The researchers project that by the year 2075, the oceans will emit more CFC-11 back into the atmosphere than they absorb, emitting detectable amounts of the chemical by 2130. Further, with increasing climate change, this shift will occur 10 years earlier. The emissions of CFC-11 from the ocean will effectively extend the chemical’s average residence time, causing it to linger five years longer in the atmosphere than it otherwise would. This may impact future estimations of CFC-11 emissions.

The new results may help scientists and policymakers better pinpoint future sources of the chemical, which is now banned worldwide under the Montreal Protocol.

“By the time you get to the first half of the 22nd century, you’ll have enough of a flux coming out of the ocean that it might look like someone is cheating on the Montreal Protocol, but instead, it could just be what’s coming out of the ocean,” says study co-author Susan Solomon, the Lee and Geraldine Martin Professor of Environmental Studies in MIT’s Department of Earth, Atmospheric and Planetary Sciences. “It’s an interesting prediction and hopefully will help future researchers avoid getting confused about what’s going on.”

CFC-11 is a chlorofluorocarbon that was commonly used to make refrigerants and insulating foams. When emitted to the atmosphere, the chemical sets off a chain reaction that ultimately destroys ozone, the atmospheric layer that protects the Earth from harmful ultraviolet radiation. Since 2010, the production and use of the chemical has been phased out worldwide under the Montreal Protocol, a global treaty that aims to restore and protect the ozone layer.

Since its phaseout, levels of CFC-11 in the atmosphere have been steadily declining, and scientists estimate that the ocean has absorbed about 5 to 10 percent of all manufactured CFC-11 emissions. As concentrations of the chemical continue to fall in the atmosphere, however, it’s predicted that CFC-11 will oversaturate in the ocean, pushing it to become a source rather than a sink.

“For some time, human emissions were so large that what was going into the ocean was considered negligible,” Solomon says. “Now, as we try to get rid of human emissions, we find we can’t completely ignore what the ocean is doing anymore.”

In their new paper, the MIT team looked to pinpoint when the ocean would become a source of the chemical, and to what extent the ocean would contribute to CFC-11 concentrations in the atmosphere. They also sought to understand how climate change would impact the ocean’s ability to absorb the chemical in the future.

The researchers used a hierarchy of models to simulate the mixing within and between the ocean and atmosphere. They began with a simple model of the atmosphere and the upper and lower layers of the ocean, in both the northern and southern hemispheres. They added into this model anthropogenic emissions of CFC-11 that had previously been reported through the years, then ran the model forward in time, from 1930 to 2300, to observe changes in the chemical’s flux between the ocean and the atmosphere.

They then replaced the ocean layers of this simple model with the MIT general circulation model, or MITgcm, a more sophisticated representation of ocean dynamics, and ran similar simulations of CFC-11 over the same time period.

Both models produced atmospheric levels of CFC-11 through the present day that matched with recorded measurements, giving the team confidence in their approach. When they looked at the models’ future projections, they observed that the ocean began to emit more of the chemical than it absorbed, beginning around 2075. By 2145, the ocean would emit CFC-11 in amounts that would be detectable by current monitoring standards. 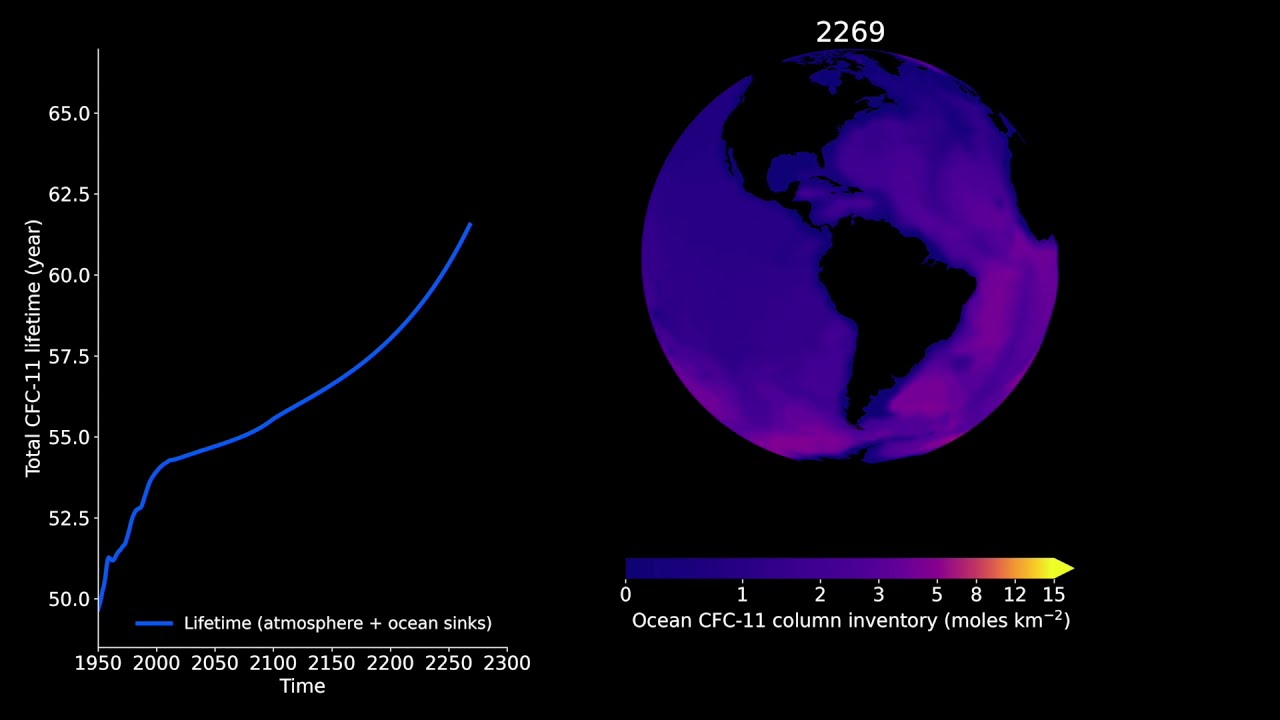 Play video
This animation shows (at right) the CFC-11 stored in the ocean over time, and (at left) the corresponding change in the chemical’s total atmospheric lifetime.

The ocean’s uptake in the 20th century and outgassing in the future also affects the chemical’s effective residence time in the atmosphere, decreasing it by several years during uptake and increasing it by up to 5 years by the end of 2200.

Climate change will speed up this process. The team used the models to simulate a future with global warming of about 5 degrees Celsius by the year 2100, and found that climate change will advance the ocean’s shift to a source by 10 years and produce detectable levels of CFC-11 by 2140.

“Generally, a colder ocean will absorb more CFCs,” Wang explains. “When climate change warms the ocean, it becomes a weaker reservoir and will also outgas a little faster.”

Their simulations show that the ocean’s shift will occur slightly faster in the Northern Hemisphere, where large-scale ocean circulation patterns are expected to slow down, leaving more gases in the shallow ocean to escape back to the atmosphere. However, knowing the exact drivers of the ocean’s reversal will require more detailed models, which the researchers intend to explore.

“Some of the next steps would be to do this with higher-resolution models and focus on patterns of change,” says Scott. “For now, we’ve opened up some great new questions and given an idea of what one might see.”

This research was supported, in part, by the VoLo Foundation, the Simons Foundation, and the National Science Foundation.

A new study by MIT researchers finds that the oceans may begin emitting chlorofluorocarbons by 2075, reports Valerie Yurk for E&E News. “Even if there were no climate change, as CFCs decay in the atmosphere, eventually the ocean has too much relative to the atmosphere, and it will come back out," says Prof. Susan Solomon.

Emissions of several ozone-depleting chemicals are larger than expected