Emissions of several ozone-depleting chemicals are larger than expected 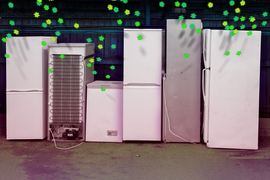 ↓ Download Image
Caption: MIT researchers have found that much of the current emission of CFC-11 and CFC-12 likely stems from large CFC “banks” — old equipment such as building insulation foam, refrigerators and cooling systems, and foam insulation, that was manufactured before the global phaseout of CFCs and is still leaking the gases into the atmosphere.
Credits: Image: Jose-Luis Olivares

Caption:
MIT researchers have found that much of the current emission of CFC-11 and CFC-12 likely stems from large CFC “banks” — old equipment such as building insulation foam, refrigerators and cooling systems, and foam insulation, that was manufactured before the global phaseout of CFCs and is still leaking the gases into the atmosphere.
Credits:
Image: Jose-Luis Olivares

In 2016, scientists at MIT and elsewhere observed the first signs of healing in the Antarctic ozone layer. This environmental milestone was the result of decades of concerted effort by nearly every country in the world, which collectively signed on to the Montreal Protocol. These countries pledged to protect the ozone layer by phasing out production of ozone-depleting chlorofluorocarbons, which are also potent greenhouse gases.

Now MIT researchers have found that much of the current emission of these gases likely stems from large CFC “banks” — old equipment such as building insulation foam, refrigerators and cooling systems, and foam insulation, that was manufactured before the global phaseout of CFCs and is still leaking the gases into the atmosphere. Based on earlier analyses, scientists concluded that CFC banks would be too small to contribute very much to ozone depletion, and so policymakers allowed the banks to remain.

It turns out there are oversized banks of both CFC-11 and CFC-12. The banks slowly leak these chemicals at concentrations that, if left unchecked, would delay the recovery of the ozone hole by six years and add the equivalent of 9 billion metric tons of carbon dioxide to the atmosphere — an amount that is similar to the current European Union pledge under the UN Paris Agreement to reduce climate change.

“Wherever these CFC banks reside, we should consider recovering and destroying them as responsibly as we can,” says Susan Solomon, the Lee and Geraldine Martin Professor of Environmental Studies at MIT, who is a co-author of the study. “Some banks are easier to destroy than others. For instance, before you tear a building down, you can take careful measures to recover the insulation foam and bury it in a landfill, helping the ozone layer recover faster and perhaps taking off a chunk of global warming as a gift to the planet.”

The team also identified an unexpected and sizable source of another ozone-depleting chemical, CFC-113. This chemical was traditionally used as a cleaning solvent, and its production was banned, except for in one particular use, as a feedstock for the manufacturing of other chemical substances. It was thought that chemical plants would use the CFC-113 without allowing much leakage, and so the chemical’s use as a feedstock was allowed to continue.

The study appears today in Nature Communications. Co-authors with Lickley and Solomon are Sarah Fletcher, and Kane Stone of MIT, along with Guus Velders of Utrecht University, John Daniel and Stephen Montzka of the National Oceanic and Atmospheric Administration, Matthew Rigby of the University of Bristol, and Lambert Kuijpers of A/gent Ltd. Consultancy, in the Netherlands.

From top to bottom

The new results are based on an analysis the team developed that combines two common methods for estimating the size of CFC banks around the world.

The first method is a top-down approach, which looks at CFCs produced around the world, based on country-by-country reporting, and then compares these numbers to actual concentrations of the gasses and how long they persist in the atmosphere. After accounting for atmospheric destruction, the difference between a chemical’s production and its atmospheric concentrations gives scientists an estimate of the size of CFC banks around the world.

Based on recent international assessments that use this top-down approach, there should be no CFC banks left in the world.

“But those values are subject to large uncertainties: Small differences in production values or lifetimes or concentrations can lead to large differences in the bank size,” Lickley notes.

The second method is a bottom-up approach, which uses industry-reported values of CFC production and sales in a variety of applications such as refrigeration or foams, and estimates of how quickly each equipment type is depleting over time.

The team combined the best of both methods in a Bayesian probabilistic model — a hybrid approach that calculates the global size of CFC banks based on both atmospheric data, and country and industry-level reporting of CFC production and sales in various uses.

“We also allow there to be some uncertainties, because there could be reporting errors from different countries, which wouldn’t be surprising at all,” Solomon says. “So it’s a much better quantification of the size of the bank.”

The CFC banks, and the sheer quantity of old equipment storing these chemicals around the world, seem to be larger than any previous estimates. The team found the amount of CFC 11 and 12 stored up in banks is about 2.1 million metric tons — an amount that would delay ozone recovery by six years if released to the atmosphere. This CFC bank is also equivalent to about 9 billion metric tons of carbon dioxide in terms of its effect on climate change.

Interestingly, the amount of both CFC-11 and CFC-12 that is being emitted from these banks is enough to account for the recently observed emissions in both gases.

“It really looks like, other than the extra amount being produced in China that seems to have stopped now, the rest of what we’re seeing is no mystery: It’s just what’s coming out of the banks. That’s good news,” Solomon says. “It means there doesn’t seem to be any further cheating going on. If there is, it’s very small. And we wanted to know, if you were to recover and destroy these building foams, and replace old cooling systems and such, in a more responsible way, what more could that do for climate change?”

To answer that, the team explored several theoretical policy scenarios and their potential effect on the emissions produced by CFC banks.

An “opportunity lost” scenario considers what would have happened if all banks were destroyed back in 2000 — the year that many developed countries agreed to phase out CFC production. If this scenario had played out, the measure would have saved the equivalent of 25 billion metric tons of carbon dioxide between 2000 and 2020, and there would be no CFC emissions lingering now from these banks.

A second scenario predicts CFC emissions in the atmosphere if all banks are recovered and destroyed in 2020. This scenario would save the equivalent of 9 billion metric tons of carbon dioxide emitted to the atmosphere. If these banks were destroyed today, it would also help the ozone layer recover six years faster.

This research was supported, in part, by VoLo foundation. Solomon is also supported by a Lee and Geraldine Martin Professorship.