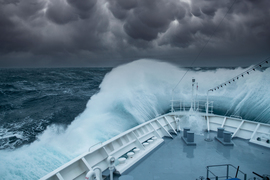 Caption:
A new study finds that North Atlantic hurricanes have indeed increased in frequency over the last 150 years, similar to what historical records have shown.
Credits:
Image: MIT News, iStockphoto

When forecasting how storms may change in the future, it helps to know something about their past. Judging from historical records dating back to the 1850s, hurricanes in the North Atlantic have become more frequent over the last 150 years.

However, scientists have questioned whether this upward trend is a reflection of reality, or simply an artifact of lopsided record-keeping. If 19th-century storm trackers had access to 21st-century technology, would they have recorded more storms? This inherent uncertainty has kept scientists from relying on storm records, and the patterns within them, for clues to how climate influences storms.

A new MIT study published today in Nature Communications has used climate modeling, rather than storm records, to reconstruct the history of hurricanes and tropical cyclones around the world. The study finds that North Atlantic hurricanes have indeed increased in frequency over the last 150 years, similar to what historical records have shown.

In particular, major hurricanes, and hurricanes in general, are more frequent today than in the past. And those that make landfall appear to have grown more powerful, carrying more destructive potential.

Curiously, while the North Atlantic has seen an overall increase in storm activity, the same trend was not observed in the rest of the world. The study found that the frequency of tropical cyclones globally has not changed significantly in the last 150 years.

“The evidence does point, as the original historical record did, to long-term increases in North Atlantic hurricane activity, but no significant changes in global hurricane activity,” says study author Kerry Emanuel, the Cecil and Ida Green Professor of Atmospheric Science in MIT’s Department of Earth, Atmospheric, and Planetary Sciences. “It certainly will change the interpretation of climate’s effects on hurricanes — that it’s really the regionality of the climate, and that something happened to the North Atlantic that’s different from the rest of the globe. It may have been caused by global warming, which is not necessarily globally uniform.”

The most comprehensive record of tropical cyclones is compiled in a database known as the International Best Track Archive for Climate Stewardship (IBTrACS). This historical record includes modern measurements from satellites and aircraft that date back to the 1940s. The database’s older records are based on reports from ships and islands that happened to be in a storm’s path. These earlier records date back to 1851, and overall the database shows an increase in North Atlantic storm activity over the last 150 years.

Recently, scientists have used a statistical approach to identify storms that the historical record may have missed. To do so, they consulted all the digitally reconstructed shipping routes in the Atlantic over the last 150 years and mapped these routes over modern-day hurricane tracks. They then estimated the chance that a ship would encounter or entirely miss a hurricane’s presence. This analysis found a significant number of early storms were likely missed in the historical record. Accounting for these missed storms, they concluded that there was a chance that storm activity had not changed over the last 150 years.

But Emanuel points out that hurricane paths in the 19th century may have looked different from today’s tracks. What’s more, the scientists may have missed key shipping routes in their analysis, as older routes have not yet been digitized.

“All we know is, if there had been a change (in storm activity), it would not have been detectable, using digitized ship records,” Emanuel says “So I thought, there’s an opportunity to do better, by not using historical data at all.”

Instead, he estimated past hurricane activity using dynamical downscaling — a technique that his group developed and has applied over the last 15 years to study climate’s effect on hurricanes. The technique starts with a coarse global climate simulation and embeds within this model a finer-resolution model that simulates features as small as hurricanes. The combined models are then fed with real-world measurements of atmospheric and ocean conditions. Emanuel then scatters the realistic simulation with hurricane “seeds” and runs the simulation forward in time to see which seeds bloom into full-blown storms.

For the new study, Emanuel embedded a hurricane model into a climate “reanalysis” — a type of climate model that combines observations from the past with climate simulations to generate accurate reconstructions of past weather patterns and climate conditions. He used a particular subset of climate reanalyses that only accounts for observations collected from the surface — for instance from ships, which have recorded weather conditions and sea surface temperatures consistently since the 1850s, as opposed to from satellites, which only began systematic monitoring in the 1970s.

“We chose to use this approach to avoid any artificial trends brought about by the introduction of progressively different observations,” Emanuel explains.

He ran an embedded hurricane model on three different climate reanalyses, simulating tropical cyclones around the world over the past 150 years. Across all three models, he observed “unequivocal increases” in North Atlantic hurricane activity.

“There’s been this quite large increase in activity in the Atlantic since the mid-19th century, which I didn’t expect to see,” Emanuel says.

Within this overall rise in storm activity, he also observed a “hurricane drought” — a period during the 1970s and 80s when the number of yearly hurricanes momentarily dropped. This pause in storm activity can also be seen in historical records, and Emanuel’s group proposes a cause: sulfate aerosols, which were byproducts of fossil fuel combustion, likely set off a cascade of climate effects that cooled the North Atlantic and temporarily suppressed hurricane formation.

“The general trend over the last 150 years was increasing storm activity, interrupted by this hurricane drought,” Emanuel notes. “And at this point, we’re more confident of why there was a hurricane drought than why there is an ongoing, long-term increase in activity that began in the 19th century. That is still a mystery, and it bears on the question of how global warming might affect future Atlantic hurricanes.”

Prof. Kerry Emanuel speaks with AP reporter Seth Borenstein about the upcoming hurricane season and his research showing an increase in Atlantic storms over the past 150 years.

Researchers from MIT and Princeton University have found that flooding events will become much more common by the end of the century, especially in New England, reports Evan Bush for NBC. “The researchers used computer modeling to stimulate thousands of ‘synthetic’ hurricanes toward the end of this century and in a scenario where greenhouse gas emissions are very high,” writes Bush.

Reuters reporter Andrea Januta writes that using computer models Prof. Kerry Emanuel has found that hurricanes in the North Atlantic have been growing in intensity and frequency as global temperatures have increasing. Emanuel “turned to computer simulations to recreate climate conditions for the last 150 years. Using three different climate models, he then scattered hurricane “seeds,” or conditions that could produce a storm, throughout the models to see how many seeds developed into storms,” writes Januta.

A new study by Prof. Kerry Emanuel examining the history of hurricanes finds that North Atlantic hurricanes are increasing in frequency and intensity, write Matthew Cappucci and Jason Samenow for The Washington Post. Emanuel “employed a novel approach to evaluate past storm activity,” they write. “Rather than relying on historical observations, which may have gaps, he performed climate modeling to reconstruct a continuous record of hurricane activity over the past 150 years from which to gauge trends.”

A primer for understanding climate science