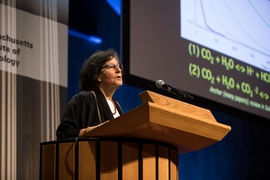 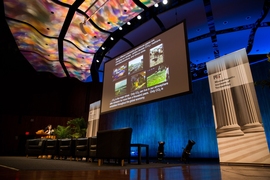 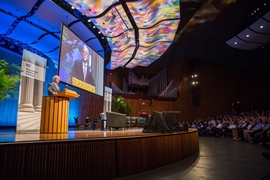 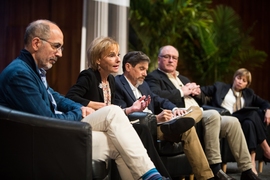 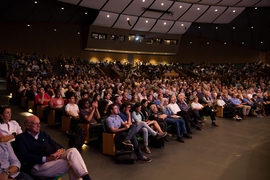 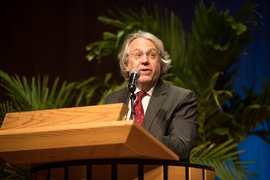 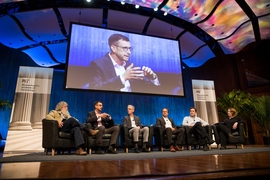 In the first of six symposia planned at MIT this academic year on the subject of climate change, panels of specialists on the science of global climate described the state of knowledge on the subject today. They also discussed the areas where more research is needed to pin down exactly how severely and quickly climate change’s effects may occur, and what kinds of actions are urgently needed to address the enormous disruptions climate change will bring.

Keynote speaker Susan Solomon, the Lee and Geraldine Martin Professor of Environmental Studies and Chemistry, gave an overview of the state of climate science today, explaining that the vastness of the timescales involved “is one of the things that makes this problem so fascinating.” However, she added, it also presents a real challenge in communicating the urgency of the issue, because carbon dioxide emissions being produced now can persist in the air for centuries, with their effects building over time.

Even if the world were to stabilize greenhouse gas emissions at today’s level, the temperature would continue to rise, and sea level would continue to rise even more, she said. Anywhere from 50 to 100 percent of the expected temperature increase from a given amount of carbon dioxide “is in the pipeline,” she said, because it takes time for the changed atmosphere and oceans to reach a new state of equilibrium: “The temperature stabilizes after a few hundred years, but the sea level just keeps going and going.”

She said “it’s sobering to take a look at the 25 warmest years that have been recorded, and realize that if you’re 32, you’ve been alive for all of them. We, this generation of people, are living on the warmest planet that has ever been measured in the environmental record.” And that increase is something we’re stuck with, she said. “Even if we go cold turkey” and eliminate all greenhouse gas emissions, “temperatures go almost constant for 1,000 years. The cumulative carbon dioxide that’s been emitted is what controls it.”

The symposium, which drew a capacity crowd to MIT’s Kresge Auditorium, was chaired by Kerry Emanuel, the Cecil and Ida Green Professor of Atmospheric Science, and featured two panels of leading climate scientists who described the state of present knowledge about the effects and extent of climate change, remaining uncertainties and how to address them, and how the physical effects of warming may vary under different policy approaches.

MIT President L. Rafael Reif, in introducing the first of the six planned symposia, said, “I believe that, as a society, we must find ways to invest aggressively in advancing climate science and in making climate mitigation and adaptation technologies dramatically less expensive: inexpensive enough to win widespread political support, to be affordable for every society, and to deploy on a planetary scale.”

Reif added that one way to foster that would be through a tax on carbon, which “will keep pushing prices [of renewables] down and make noncarbon alternatives more attractive. That is clearly true. Less clear, however, is whether the carbon-cost hammer is enough to drive the nail of global societal change.” Continued progress with noncarbon or low-carbon alternatives is also essential, he said.

While the picture of human-induced global climate change is well-established overall, in one of the panel discussions Ray Pierrehumbert, a professor of physics at Oxford University, described some the remaining sources of uncertainty. The greatest source of uncertainty, he said, lies in some of the complex feedback effects that may occur, especially involving clouds.

Clouds reflect sunlight and therefore provide some cooling, but also are insulating and so help keep the surface warm. Their dynamics are highly complex, “involving interactions between things at the scale of millimeters up to thousands of kilometers.” As a result, “one reason we don’t know how bad it’s going to get is because of clouds,” Pierrehumbert said.

But that uncertainty is no cause for complacency. “It’s extremely unlikely that there is some mystical effect that would make things better” than present projections, he said. Rather, “it’s quite possible things would be worse.”

Tapio Schneider, a professor of environmental science at Caltech, added that the uncertainties about clouds include how they are affected by air pollution, which provides nucleation centers for water droplets. These interactions are complicated to model, but “it seems that some of these aerosol effects are stronger than expected.” That may mean that overall warming could be greater than expected, he said.

Paul O’Gorman, an MIT professor of atmospheric science, said that it’s important to look at how the effects of a warming atmosphere will vary depending on local conditions. “Some countries will see larger monsoons,” he said, for example in India, where rainfall could actually double in some regions because of changes in atmospheric circulation patterns. “There are a lot of outstanding questions” in the details of these changes, and the answers could be crucial for regional planning.

Pierrehumbert added that while nations have made commitments to try to limit global warming to no more than 2 degrees Celsius, that is a somewhat arbitrary cap. “Even if we don’t think we can halt warming at two degrees, we need to go full speed ahead” on curbing emissions. “Things will be horrible at two degrees, but much more horrible at four degrees.”

Maria Zuber, MIT’s vice president for research, chaired the second panel discussion and said this series of symposia is intended as a way “to both educate and engage the MIT community” in the issue of climate change and “how we dial it up” in efforts to combat the problem.

Sherri Goodman, a senior fellow at the Wilson Center, described the impact of climate change on military facilities and overall military readiness. “It’s a threat multiplier,” she said. “It will amplify and aggravate in different ways our national security challenges,” she said.

For example, the opening of the Arctic ocean because of melting sea ice is creating a whole new area of conflicting interests, where both Russia and China have been making moves to control the region’s potential resources, from shipping lanes to petroleum reserves.

Philip Duffy, president of the Woods Hole Research Center, described his work in providing corporations with detailed information about the specific local impacts they can expect at their facilities as a result of climate change. Climate change may be a multiplier of risks in that context as well, he added, citing regional conflicts and outmigration resulting from droughts and other effects.

John Reilly, co-director of the Joint Program on the Science and Policy of Global Change, also stressed that regardless of any remaining uncertainties in the details of climate change’s effects, “it doesn’t mean we should wait until the science is resolved. Actually, we need the opposite effect.” If there is a whole range of possible outcomes, it’s important to take very seriously “the really extreme and catastrophic effects.” Among the range of possible outcomes indicated by climate models, without concerted action, climate change “could make huge parts of the planet uninhabitable. Even if that probability is very small, that can dominate the entire cost-benefit calculation,” he said.

Letter regarding the first of six climate change symposia