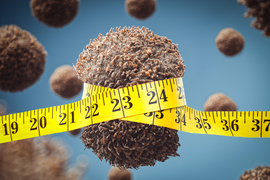 In recent years, there has been some evidence that dietary interventions can help to slow the growth of tumors. A new study from MIT, which analyzed two different diets in mice, reveals how those diets affect cancer cells, and offers an explanation for why restricting calories may slow tumor growth.

The findings do not suggest that cancer patients should try to follow either of these diets, the researchers say. Instead, they believe the findings warrant further study to determine how dietary interventions might be combined with existing or emerging drugs to help patients with cancer.

“There’s a lot of evidence that diet can affect how fast your cancer progresses, but this is not a cure,” says Matthew Vander Heiden, director of MIT’s Koch Institute for Integrative Cancer Research and the senior author of the study. “While the findings are provocative, further study is needed, and individual patients should talk to their doctor about the right dietary interventions for their cancer.”

MIT postdoc Evan Lien is the lead author of the paper, which appears today in Nature.

Vander Heiden, who is also a medical oncologist at Dana-Farber Cancer Institute, says his patients often ask him about the potential benefits of various diets, but there is not enough scientific evidence available to offer any definitive advice. Many of the dietary questions that patients have focus on either a calorie-restricted diet, which reduces calorie consumption by 25 to 50 percent, or a ketogenic diet, which is low in carbohydrates and high in fat and protein.

Previous studies have suggested that a calorically restricted diet might slow tumor growth in some contexts, and such a diet has been shown to extend lifespan in mice and many other animal species. A smaller number of studies exploring the effects of a ketogenic diet on cancer have produced inconclusive results.

“A lot of the advice or cultural fads that are out there aren’t necessarily always based on very good science,” Lien says. “It seemed like there was an opportunity, especially with our understanding of cancer metabolism having evolved so much over the past 10 years or so, that we could take some of the biochemical principles that we’ve learned and apply those concepts to understanding this complex question.”

Cancer cells consume a great deal of glucose, so some scientists had hypothesized that either the ketogenic diet or calorie restriction might slow tumor growth by reducing the amount of glucose available. However, the MIT team’s initial experiments in mice with pancreatic tumors showed that calorie restriction has a much greater effect on tumor growth than the ketogenic diet, so the researchers suspected that glucose levels were not playing a major role in the slowdown.

“Not only does caloric restriction starve tumors of lipids, it also impairs the process that allows them to adapt to it. That combination is really contributing to the inhibition of tumor growth,” Lien says.

In addition to their mouse research, the researchers also looked at some human data. Working with Brian Wolpin, an oncologist at Dana-Farber Cancer Institute and an author of the paper, the team obtained data from a large cohort study that allowed them to analyze the relationship between dietary patterns and survival times in pancreatic cancer patients. From that study, the researchers found that the type of fat consumed appears to influence how patients on a low-sugar diet fare after a pancreatic cancer diagnosis, although the data are not complete enough to draw any conclusions about the effect of diet, the researchers say.

Although this study showed that calorie restriction has beneficial effects in mice, the researchers say they do not recommend that cancer patients follow a calorie-restricted diet, which is difficult to maintain and can have harmful side effects. However, they believe that cancer cells’ dependence on the availability of unsaturated fatty acids could be exploited to develop drugs that might help slow tumor growth.

One possible therapeutic strategy could be inhibition of the SCD enzyme, which would cut off tumor cells’ ability to produce unsaturated fatty acids.

“The purpose of these studies isn’t necessarily to recommend a diet, but it’s to really understand the underlying biology,” Lien says. “They provide some sense of the mechanisms of how these diets work, and that can lead to rational ideas on how we might mimic those situations for cancer therapy.”

The fluid that feeds tumor cells