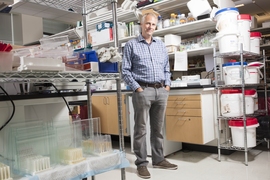 Nearly 100 years ago, the German chemist Otto Warburg discovered that cancer cells metabolize nutrients differently than most normal cells. His discovery launched the field of cancer metabolism research, but interest in this area waned; by the 1970s most cancer scientists had shifted their focus to the genetic mutations that drive cancer development.

In the past decade or so, interest in cancer metabolism has resurged, and the first drugs that target cancer cells’ abnormal metabolism were approved to treat leukemia in 2017.

“Cancer metabolism is a very sophisticated field at this point,” says Matthew Vander Heiden, an associate professor of biology at MIT. “We have a lot better understanding of what nutrients cancer cells use and what determines how those nutrients are used. This has led to different ways to think about drugs.”

Vander Heiden, who is also a member of MIT’s Koch Institute for Integrative Cancer Research, is one of the people responsible for the recent surge in cancer metabolism research. As a graduate student and postdoc, he published some of the first studies of how cancer cells alter their metabolism, and now his lab at MIT is devoted to the topic.

“All of the time that I was in grad school and working as a postdoc, I was never working in a lab that was dedicated to studying metabolism. So my vision, if someone gave me a job, was to set up a lab that could really be built in a way that would allow us to ask questions about metabolism,” he says.

Vander Heiden grew up in a small town in Wisconsin, and unlike most of his high school classmates, he headed out of state for college, to the University of Chicago. He was interested in science, so decided on a pre-med track. A work-study job in a plant biology lab led him to discover that he also enjoyed doing research.

“At that point I already had this idea I was going to go to medical school, but then the idea of MD/PhD came up, and I ended up going down that path,” Vander Heiden says.

While in the MD/PhD program at the University of Chicago Medical School, he worked in the lab of Craig Thompson, now president of Memorial Sloan Kettering Cancer Center. At that time, Thompson was studying the biochemical regulation of apoptosis, the programmed cell death pathway. For his PhD thesis, Vander Heiden investigated the function of a protein called Bcl-x, which is a regulator of apoptosis found in the membranes of mitochondria — cell organelles responsible for generating energy.

“That project really got me thinking about how the mitochondria work and how metabolism works,” Vander Heiden recalls. “At the time, I came to the realization that we don’t understand cell metabolism anywhere near as well as we thought we did, and someone should really study this.”

After finishing his degrees, he spent five years doing clinical training, then decided to pursue research in cancer metabolism.

“Altered metabolism has been known about in cancer for 100 years, but few people were studying it,” Vander Heiden says. “The challenge was finding a lab that would allow me to study metabolism and cancer, which in 2004-2005 was not such an obvious thing to do.”

He ended up going to Harvard Medical School to work with Lewis Cantley, who studies signaling pathways in cells and was receptive to the idea of exploring cancer metabolism. There, Vander Heiden began studying an enzyme called pyruvate kinase M2 (PKM2), which is involved in regulation of glycolysis, a biochemical process that cells use to break down sugar for energy.

In 2008, Vander Heiden, Cantley, and others at Harvard Medical School reported that when cells shift between normal and Warburg (cancer-associated) metabolism, they start using PKM2 instead of PKM1, the enzyme that adult cells normally use for glycolysis. Cantley and Craig Thompson have since founded a company, Agios Pharmaceuticals, that is developing potential drugs that target PKM2, as well as other molecules involved in cancer metabolism.

In 2010, Vander Heiden became one of the first new faculty members hired after the creation of MIT’s Koch Institute, where he set up a lab focused on metabolism, particularly cancer metabolism. He is now an associate director of the Koch Institute, and also a member of the MIT Center for Precision Cancer Medicine.

His research has yielded many insights into the abnormal metabolism of cancer cells. In one study, together with other MIT researchers, he found that tumor cells turn on an alternative pathway that allows them to build lipids from the amino acid glutamine instead of the glucose that healthy cells normally use. He also found that altering the behavior of PKM2 to make it act more like PKM1 could stop tumor cell growth.

Studies such as these can offer insights that may help researchers to develop drugs that starve tumor cells of the nutrients they need, offering a new way to fight cancer, Vander Heiden says.

“If one wants to develop drugs that target metabolism, one really needs to focus on the context in which it’s happening, which is the environment of the cell plus the genetics of the cell,” he says. “That is what defines the sensitivity to drugs.”

How cancer cells fuel their growth

How cancer cells get by on a starvation diet