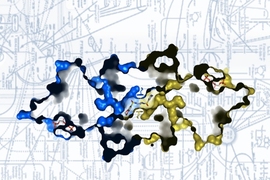 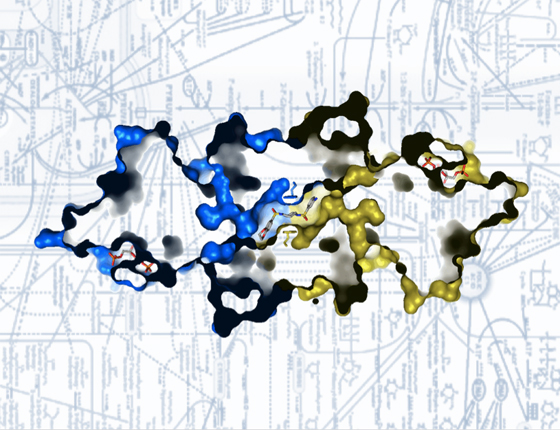 Biologists found that boosting the activity of pyruvate kinase, the enzyme seen here, can prevent tumors from growing.
Image: Dimitris Anastasiou, Will Israelsen and Andrea Howell

Unlike ordinary cells, cancer cells devote most of their energy to reproducing themselves. To do this, they must trigger alternative metabolic pathways that produce new cellular building blocks, such as DNA, carbohydrates and lipids.

Chemical compounds that disrupt an enzyme critical to this metabolic diversion prevent tumors from forming in mice, according to an MIT-led study appearing online in Nature Chemical Biology on Aug. 26.

Matthew Vander Heiden, senior author of the paper, and others have previously shown that cancer cells use a specific form of this enzyme, known as pyruvate kinase, which allows them to focus their energy on building new cells. The new work suggests that drugs that reverse the properties of pyruvate kinase to be more like the form found in many normal cells hold potential to treat human cancers; however, more research is needed to demonstrate that, says Vander Heiden, the Howard S. and Linda B. Stern Career Development Assistant Professor of Biology and a member of the David H. Koch Institute for Integrative Cancer Research at MIT.

“It’s fair to say that perhaps activating pyruvate kinase could have some role in pushing tumors away from a program that allows them to efficiently grow,” Vander Heiden says. “Whether or not it would really be a viable drug in people is an open question.”

Pyruvate kinase controls one of the final steps of glycolysis, which breaks down one molecule of glucose to produce two molecules of ATP, the cell’s energy currency. In healthy cells, the end product of glycolysis, a carbohydrate called pyruvate, enters another pathway that generates much more ATP. A form of pyruvate kinase called PKM1 directs pyruvate into that pathway.

When cells become cancerous, they express an alternate form of the enzyme, known as PKM2. This version is much less active than its PKM1 counterpart, which is always turned on. This low activity allows the products of glycolysis to be diverted into metabolic pathways that build new building blocks, such as carbohydrates, lipids and fatty acids.

“Normal cells don’t need to build things, they just need to keep the lights on. They just burn energy to keep things running, whereas cancer cells have to do that as well as build new cells,” Vander Heiden says.

That discovery raised the possibility that cancerous growth could be turned off by boosting pyruvate kinase activity, forcing the cell to resume normal metabolic activity.

Vander Heiden and colleagues have previously shown that increasing PKM1 activity would restore cancer cells to a normal metabolic state. In this study, the researchers wanted to see if they could achieve the same effect through pharmaceutical compounds that would force PKM2 to be constantly on, essentially turning it into PKM1.

Scientists at the National Center for Advancing Translational Sciences developed several candidate compounds as part of the NIH Chemical Genomics Center, which is working to identify chemical probes and potential drug compounds to study the functions of genes and biochemical pathways in cells.

The MIT team tested two of the compounds in cancer cells grown in the lab and one in mice implanted with human tumors. They found that in the treated mice, tumors did not grow.

“This is an exciting piece of the PKM2 puzzle which will certainly inform future strategies in the bio-industrial world and further boost research in the field of cancer metabolism,” says Eyal Gottlieb, a professor of molecular cell biology at the University of Glasgow, who was not part of the research team.

The researchers found that these compounds work by locking PKM2 into an active form. They are now trying to figure out, on a molecular level, just what happens inside a cell when this switch takes place. They are also developing mouse models to determine whether activating PKM2 might shrink established tumors.