Understanding art in a time of crisis 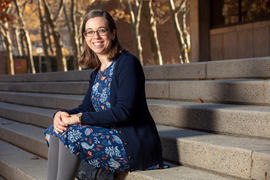 Across America, the Covid-19 crisis is creating unsettling questions for opera companies. How can they produce performances during the pandemic? What kinds of art will people want? Will companies survive?

To be sure, there have been other moments when opera has been disrupted and companies shuttered, such as World War II. Such circumstances always have the potential to change the genre’s trajectory.

MIT Associate Professor Emily Richmond Pollock is closely attuned to these issues. Pollock is a music historian who studies how opera has evolved while keeping its links to the past intact. In her 2019 book “Opera after the Zero Hour,” Pollock scrutinized opera in postwar Germany, where the reconstruction of society opened a space to help modernize the genre.

“It’s a disaster for the performing arts sector,” Pollock says. “It’s not the same kind of disaster [as war], but these companies are going to have decisions to make about how to move forward.”

As Pollock’s work emphasizes, even when opera moves forward it tends to conserve its heritage more than other forms of music do. This is opera’s essential tension: How does it balance innovation and tradition? The pandemic reopens such questions for opera companies today. Does social crisis generate an impulse toward experiencing new works, or intensify people’s desire to see the familiar again?

“In the immediate postwar period, the first production in a German opera house would be ‘The Marriage of Figaro’ or ‘Fidelio,’ something standard in their repertoire, for which they already had costumes and could cobble together sets,” Pollock says. “It wasn’t the most innovative thing, but it was comfortable and materially possible. In Covid times, a lot of opera companies are looking for new work that is native to Zoom or tailored for alternative performance ideas. It’s a contrast — but I wonder if innovative works and new modalities will become the norm, or if companies will revert to the known quantities when they come back to life.”

Studying opera in troubled times can yield subtle insights beyond that. For instance: Even when we seek out familiar classics, we may find new meaning in them.

“Opera is both an escape and a way of processing things,” Pollock says. “Stories from a long time ago can be surprisingly relevant with a new set of circumstances. Think of all the people in operas with horrible diseases — it’s almost a cliché that the soprano is dying of consumption and her friends are devastated. We had, pre-Covid, [more] distance from that. But now [many people] know someone who has died gasping for breath. That makes it quite difficult to watch, and quite moving. Some [canonical] operas might help us get in touch with our very human, present feelings.”

Drawing these parallels, from her first book to her second project, isn’t something Pollock anticipated doing a year ago. But her scholarship always aims to illuminate the political and social context of music. For her research and teaching, Pollock was awarded tenure at MIT earlier this year.

Pollock grew up in Oregon, where she played the oboe in orchestras and composed music. She knew little about modern music until one day in high school, when her new composition teacher, a professor at at Lewis and Clark College, asked her to name her favorite 20th-century composer. Pollock replied that it was Gustav Mahler, the late-Romantic composer of sweeping symphonies, whose works are not considered part of modernist music.

“Instead of laughing at me and kicking me out of his office, he said, ‘Great, we’re going to the library,’” Pollock says. “He checked out under his faculty card a bunch of CDs of modern music for me to listen to. … It was really the beginning of my interest.”

After high school, Pollock attended Harvard University, graduating with a major in music — and diving into music history and music theory.

“I was amazed there was this whole field, musicology, where you could learn about the history of composers and pieces, and write papers about pieces,” Pollock says. “That was not something I had done before.”

Pollock also joined the Harvard College Opera (then known as Dunster House Opera), a student group, eventually becoming the president of its board. That experience showed Pollock firsthand what goes into any opera performance.

“I did the publicity, I was writing the program notes, just anything that could be useful to organize the production,” Pollock recalls. “I also played in the pit orchestra. So it was actually in my extracurricular student life that I really got into opera.”

After graduating from Harvard, Pollock entered the PhD program in music history and literature at the University of California at Berkeley, where she produced the thesis that eventually became “Opera After the Zero Hour.”

“I felt there was still a lot to ask in particular about what happened to opera in the 20th century, and in a lot of ways, that’s still the question that I’m asking,” Pollock says. She received her MA from Berkeley in 2008 and her PhD in 2012. She joined the MIT faculty later that year.

At MIT, Pollock has taught an introductory survey of Western classical music, as well as courses on opera, the symphonic repertoire, and 20th century music. Pollock finds MIT students to be musically sophisticated and highly skilled, and often equipped with music theory knowledge — but not necessarily deeply versed in music history when they start college.

“The idea that there is this more humanistic field of music studies is often news to college students, so it’s very exciting,” she says. “Students think they’re behind if they haven’t ever thought about the history of music before, but I tell them, ‘If that’s the case, then I was also behind, and I ended up being a musicologist.’”

As Pollock continues her second book project, she is focusing on five contemporary U.S. opera festivals: the Santa Fe Opera in New Mexico; the Glimmerglass Festival in Cooperstown, New York; the Central City Opera in Colorado; the Opera Theatre of Saint Louis; and the Sarasota Opera in Florida.

This quintet “tends to be more moderate” in the kinds of operas they produce and commission, while truly avant-garde opera is produced elsewhere, Pollock says. But some of these festivals have a history of commissioning musically moderate works with explicit social relevance. For example, she praises “Fire Shut Up in My Bones,” a new opera from 2019 by composer Terence Blanchard and librettist Kasi Lemmons, which was commissioned by the Opera Theatre of Saint Louis. The work is based on a memoir by New York Times columnist Charles Blow, about growing up black and bisexual in rural Louisiana.

Whatever unfolds in the post-Covid opera world, Pollock will have new material to consider about politics, society, and the meaning of art.

“It doesn’t take that many problems for a cultural institution to be on uneven footing,” Pollock says. “The pandemic is a catastrophe that shouldn’t be romanticized as an opportunity for opera companies. But hopefully most opera companies will survive in one form or another, and the form they do survive in will be the result of moments of clarity about what opera is good for, and why people care about it in their communities.”

A new act for opera