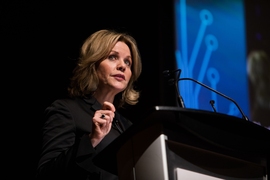 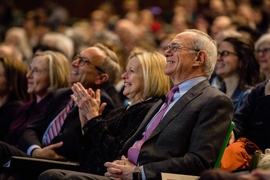 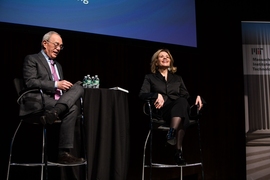 Renée Fleming normally impresses audiences with her singing. On Monday, delivering the Institute’s Compton Lecture, the famous opera singer engrossed an MIT audience with something rather different: a talk about music and neuroscience.

“There’s so much to learn about how and why music engages the brain, and even alters the brain,” said Fleming, a world-renowned soprano who in recent years has been working with the medical community to develop new research programs linking music and neuroscience.

The Compton lectures are MIT’s highest-profile, Institute-wide speaking series. Fleming’s talk, interspersed with video clips, examined the therapeutic potential of music across a number of medical applications, including recovery from brain trauma, fighting depression and combatting loneliness, and even in the recovery process from nonbrain pathologies such as cancer.

Fleming’s presentation, titled “Music and the Mind,” was delivered before a large audience at MIT’s Kresge Auditorium. In it, Fleming discussed research findings about music and health, and also described a collaboration she has developed with the National Institutes of Health to study the effects of music on the brain. Fleming herself, as she discussed, even once underwent a lengthy MRI to map her own brain’s activity in relation to music.

In her remarks, Fleming drew links between the thought processes of singers and musicians on the one hand, and scientific researchers on the other, noting that both professions require creativity and have practitioners willing to explore the boundaries of their work.

Fleming is a celebrated soprano who has often focused on opera but has also expanded her career to cover other genres of music and stage performance. A prominent star for nearly three decades, she made her debuts at the Metropolitan Opera in New York and the San Francisco Opera in the early 1990s, and has performed worldwide in many of music’s most notable venues.

Fleming has earned many awards and distinctions in her career, including the National Medal of Arts, given to her by President Obama in 2013. She has won four Grammy Awards and, in one measure of her reach, in 2014 became the first classical artist to sing the national anthem at the Super Bowl. Fleming has also performed at the Nobel Peace Prize ceremony and the Diamond Jubilee Concert for Queen Elizabeth II at Buckingham Palace.

Fleming maintains a busy performance schedule. This April, she will appear in opening performances at the Shed, a large new arts venue in New York, and in June will make her London theater debut, performing in “The Light in the Piazza” at the Royal Festival Hall.

Fleming explained that her collaboration with the NIH came about after she met musically inclined NIH Director Francis Collins at a dinner party. But it wasn’t just any old dinner party, Fleming noted; also present were U.S. Supreme Court justices, including Ruth Bader Ginsburg and Antonin Scalia, who had just ruled that day on opposite sides of the court decisions to require states to grant and recognize same-sex marriages.

“I sat between Justice Scalia and Justice Ginsburg, and let me tell you, there was not a lot of eye contact in the room,” Fleming said, drawing a roar of laughter from the crowd. “Fortunately they both love[d] opera.” Meanwhile, she added, “Francis Collins had come with his guitar, as all heads of major institutions and world leaders [should] do,” leading to a sing-along and lightening of the mood.

Fleming also took audience questions after her talk, some of which were presented to her by MIT President L. Rafael Reif.

In response to one query, Fleming said her favorite role was the Marschallin from “Der Rosenkavalier,” the Richard Strauss opera that premiered in 1911.

Fleming also noted that the intense drama of many classical operas provides a necessary emotional outlet for their audiences, perhaps now more than ever.

“Difficult emotions need to be expressed sometimes,” Fleming said. “Many of us are frankly today working 24/7, so we need those moments to let down and feel something.”

Fleming noted that her interest in science is comparatively recent, and that, as the child of two music teachers, she was not especially attuned to the STEM fields as a student.

“Math and science were just not on the radar,” said Fleming. “I thought every family sang.”

“He helped the Institute transform itself,” Reif said, emphasizing Compton’s work developing MIT’s strengths in basic scientific research, as well as the Institute’s research partnerships with the federal government.

Reif also noted that Fleming’s lecture comes at a time when the arts are building a bigger physical presence on the MIT campus, given the 2017 opening of a new theater and performing arts building (W97) on Vassar Street, and the foundational 2018 gift by Joyce Linde to create a new music building.

“MIT students love music,” Reif said. “It brings them joy and pleasure, consolation and escape. It makes them whole, and helps them understand each other.”