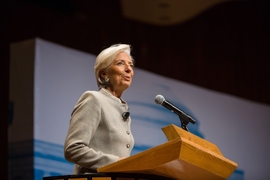 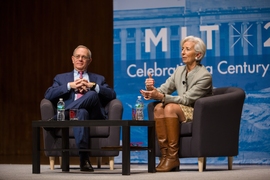 ↓ Download Image
Caption: Christine Lagarde with President L. Rafael Reif. Reif heralded Lagarde’s groundbreaking accomplishments as the first woman to lead the IMF and the first woman to be finance minister of France, among other things. 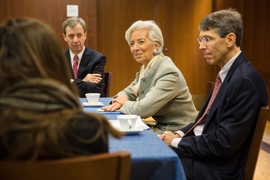 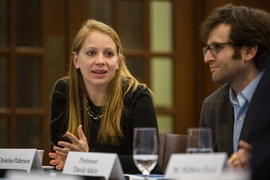 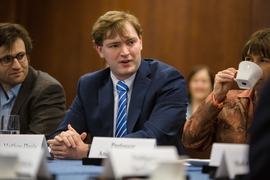 Caption:
Christine Lagarde with President L. Rafael Reif. Reif heralded Lagarde’s groundbreaking accomplishments as the first woman to lead the IMF and the first woman to be finance minister of France, among other things.
Credits:
Casey Atkins

The relentless rise in world population during the century ahead means we must develop new technologies and policies to spur economic growth, said Christine Lagarde, managing director of the International Monetary Fund (IMF), while delivering MIT's Karl Taylor Compton Lecture on Friday.

In a sweeping overview of global demographics and their effects on our civic structures, Lagarde highlighted the many challenges of living on an increasingly crowded planet, including fiscal and environmental stresses. But she emphasized that a growing population need not portend a kind of doomsday scenario, as some have envisioned.

“We need to re-frame the debate about demographics,” Lagarde said. “I believe that this challenge can be met. But it requires the right policies, political resolve, and strong leadership. … The fiscal policy responses and technological innovation are especially important parts of the solution.”

The world population is currently around 7.5 billion people and is projected to grow to 10 billion about 40 years from now.

As Lagarde emphasized in her lecture, "Demographic Change and Economic Well-being: The Role of Fiscal Policy," population growth is bound up with some distinctly positive changes, such as greater life expectancy and a growth in per-capita income around the world. Globally, life expectancy has increased from 47 years to 71 years since 1950, and per-capita income has quadrupled since the end of World War II.

Yet having more people on the planet may also be associated with a slowdown in economic growth, Lagarde noted, because an aging population is less able to work and may be fiscally burdensome for states, due to larger costs associated with health care and retirement security.

Lagarde cited technology as a countervailing force to these trends, which spurs growth and lessens the costs embedded in our shifting demographics. She heralded MIT for its focus on “technological innovation,” saying it was “essential to raising living standards over the long term.”

Lagarde also unequivocally emphasized the need for robust government investment in scientific research and development (R&D). New IMF economic research, Lagarde noted, indicates that if governments of the world’s advanced economies took steps that increased private-sector R&D by 40 percent, they would improve long-run GDP in those countries by 5 percent.

Lagarde delivered her address before a capacity audience of around 1,200 people in MIT's Kresge Auditorium. The Karl Taylor Compton Lecture Series, which dates to 1957, is MIT's most prominent lecture event. It is named after MIT’s 10th president, who served from 1930 to 1948.

MIT President L. Rafael Reif introduced Lagarde, praising her “remarkable ability to bring the right players together” when addressing fiscal crises, in order to “keep the global economy on track.”

Reif also observed that Lagarde has demonstrated a distinctively “broad view of what topics should concern the head of the IMF,” from fiscal policy to “an aging population, to discrimination, to income inequality, to climate change.” And he heralded Lagarde’s groundbreaking accomplishments as the first woman to lead the IMF and the first woman to be finance minister of France, among other things.

The IMF, founded in 1945 and now comprising 188 member countries, is an international organization that works to develop monetary cooperation, fiscal stability, and economic growth around the globe.

As Lagarde observed, there is a long-lasting intellectual connection between her organization and MIT. The last five chief economists of the IMF — Kenneth Rogoff, Raghuram Rajan, Simon Johnson, Olivier Blanchard, and Maurice Obstfeld — all received their doctorates at the Institute, a fact Lagarde termed “remarkable.” From the IMF’s point of view, she quipped, MIT could virtually be regarded as “our alma mater,” too.

Lagarde also praised MIT as a place that values “intellectual honesty and openness and relentless curiosity.”

In prescribing solutions to the demographic challenges of the 21st century, Lagarde listed a series of “game changers” that she said would be essential to grappling with the changes ahead.

One, she said, would be alterations to health care and retirement systems to manage costs. In health care, Lagarde suggested, we will need “more targeted spending, paying more attention to primary and preventive health care, promoting healthier lifestyles, and making more effective use of information technology.”

As part of this effort, Lagarde also asserted that governments would likely have to raise the retirement ages of workers to ease pensions expenses, although she acknowledged that “policymakers need to put in place a proper safety net for those who might not be healthy enough to work longer.”

And thirdly, Lagarde asserted, we need to promote economic growth in a variety of ways, from helping women participate in the work force to technological innovation.

Energy in the room

As part of her second “game changer,” pertaining to taxes and spending, Lagarde put a notable emphasis on energy policy.

"Energy pricing is key, not only for the public purse, but for the planet," Lagarde said. She added: “This means more emphasis on energy taxation and less reliance on energy subsidies.”

Lagarde pointed to new IMF research estimating that global energy subsidies were $5.3 trillion in 2015, equivalent to a whopping 6.5 percent of GDP worldwide.

"This staggering figure, I believe very strongly, needs to come down," Lagarde said.

And after her lecture, Lagarde responded to follow-up questions from Reif, including one about energy and climate change. Today’s youth, Reif observed, constituted “the first generation to truly feel the impact of climate change, and the last that can do something about it.” He added: “What … are the most important steps to take now, and what can the next generation do?”

In response, Lagarde emphasized, "We strongly believe that if subsidies were removed and a carbon price properly set ... that would go a long way toward addressing the climate change issues the world is facing.”

Such policies, in that view, would limit the damage from fossil-fuel emissions, while helping the world experience the continued economic growth it needs to in light of its increasing population.

"Everything is better with growth," Lagarde said.

Reuters reporter Svea Herbst-Bayliss writes that in her remarks at MIT, Madame Christine Lagarde, managing director of the IMF, spoke about steps that could be taken to tackle climate change. "If subsidies were removed and carbon prices set properly now and taxed that would go a long way in addressing the climate change issues the world is facing,” says Lagarde.

Francis Collins: Scientists must engage with the world

‘We need to see ahead’