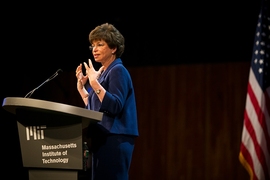 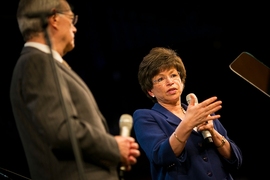 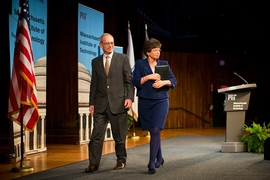 Senior White House Advisor Valerie Jarrett made an emphatic call for greater inclusiveness in education, casting the issue as a key to future prosperity, in MIT’s Compton Lecture on Thursday.

“When we’re working to ensure that all Americans have full access to education, resources, role models, encouragement, and opportunities that they need to reach their full potential, we’re unleashing the full force of our economic capacity,” Jarrett said in her lecture, “Built to Last: Opportunity, and the Economics of Empowerment,” given in MIT’s Kresge Auditorium.

In the speech, Jarrett outlined a series of policies that President Barack Obama’s administration has undertaken to encourage participation in the so-called STEM fields – science, technology, engineering, and math — by the nation’s entire population. And, observing that millions of Americans, throughout history, have been denied social rights and educational opportunities due to their ethnicity or gender, Jarrett suggested that such inequities bear both moral and practical consequences.

“Loss on this scale comes at a cost to us all, as we aren’t just denying to individuals their right to live full and vibrant lives that they so rightly deserve,” Jarrett said. “We’re forfeiting part of this country’s greatest asset, the creativity and ingenuity of all of the American people.” Referencing a line that Obama has used, she added: “The nation that goes all-in on innovation today will own the global economy tomorrow.”

A special connection to MIT history

Jarrett has served as a senior advisor to Obama since his inauguration in 2009. She oversees the White House Office of Public Engagement and Office of Intergovernmental Affairs, while also chairing the White House Council on Women and Girls.

As Jarrett recounted in her remarks, she also has a special connection to MIT: One of her great-grandfathers, Robert Taylor, was the Institute’s first African-American graduate, in 1892. Taylor, who studied architecture at MIT, went on to a distinguished career as a designer and educator, becoming the main architect and director of industrial training from the 1890s to the 1930s at the Tuskegee Institute in Alabama.

Taylor’s father, Henry Taylor, was born a slave in North Carolina in 1823, but was allowed an education as a carpenter and made a living as a contractor. Given his father’s vocation, Robert Taylor sought out MIT, in part, because it was home to the nation’s first formal architecture program.

“It was during his years on campus when the seeds were sown for what would become his life work,” Jarrett said, adding that she was “humbled” by the difficulties that her great-grandfather overcame.

“My great-grandfather’s story truly illustrates the message that I want to deliver to all of you today,” Jarrett explained. “His story was only possible because for him and his father before him, the doorway to opportunity was cracked open.”

Changing the narrative for women

Jarrett highlighted several programs the Obama administration has introduced to encourage students to enter STEM fields. Some of these, such as White House science fairs, are meant to use the president’s high profile to draw attention to science and technology.

“The president is doing everything he can to make it cool to be a geek,” Jarrett quipped.

The federal government, Jarrett noted, has committed $4.35 billion to supplement STEM education in public schools. The White House has simultaneously launched an “Educate to Innovate” program, in collaboration with corporate CEOs, with an aim of training 100,000 new teachers in STEM fields and diversifying the pool of STEM students.

Jarrett herself is directly involved in efforts to help young women enter science and technology, “working to change the narrative in this country about who is supposed to grow up dreaming of becoming a scientist, an astronaut, or an engineer.”

Such efforts are necessary, in part, to mitigate the effects of the recent economic recession, Jarrett said. She added that some technologies, such as automation in factories, “have also led to great efficiencies, which have eliminated a lot of middle-class, good-paying jobs. … We need to continue to [increase] investment in science and technology, and educate the future generations for the jobs of the future.”

The rewards of public service

The Compton Lecture is MIT’s most distinguished invited speaking event. The lectures were founded in 1957 to honor Karl Taylor Compton, who served as MIT’s president from 1930 to 1948, and as chairman of the MIT Corporation from 1948 to 1954. Compton “brought MIT a renewed sense of energy and direction,” MIT President L. Rafael Reif said in his introductory remarks.

Jarrett saluted Reif for his active participation in efforts to improve the accessibility of higher education, citing his “tremendous commitment, on behalf of MIT, to refine and strengthen outreach to high-achieving, low-income students.”

Jarrett also took several audience queries in a lively question-and-answer session — a regular feature of the Compton Lecture — including a couple of blunt inquiries on the administration’s immigration and deportation policies.

Obama, Jarrett emphasized, supports the current immigration bill the U.S. Senate has passed, which would make it easier for degree-holding immigrants to remain in the country. The U.S., Jarrett emphasized, attracts many immigrants by virtue of having “the world’s best colleges and universities,” and would benefit by retaining as many graduates of those institutions as possible. The immigration bill is currently in the U.S. House of Representatives, and Jarrett suggested that there might be action on it in 2014.

Before her tenure at the White House, Jarrett served as chief executive officer of The Habitat Company, a real estate development group in Chicago. She has practiced law with two private firms; served as chair of the board of trustees at the University of Chicago Medical Center; and worked in the public sector as chair of the Chicago Transit Board, commissioner of planning and development for the City of Chicago, and deputy chief of staff for Mayor Richard M. Daley.

Jarrett encouraged students in the audience to incorporate public service into their own careers as well.

“Your legacy will be determined by more than what you simply accomplish,” she said, “but also by what you do for society.”

‘We need to see ahead’

A foundation for building