Francis Collins: Scientists must engage with the world 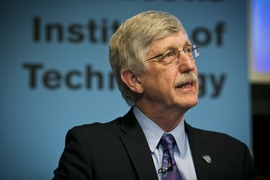 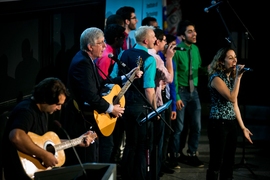 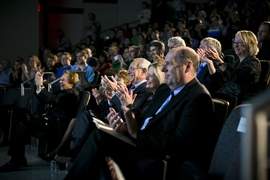 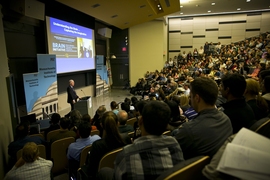 ↓ Download Image
Caption: Collins urged the packed audience in Room 10-250 to “reflect on what our role is as scientists and citizens of the world.”
Credits: Photo: Dominick Reuter 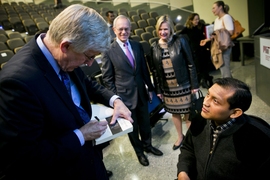 ↓ Download Image
Caption: Collins signs a copy of his book, "The Language of Life: DNA and the Revolution in Personalized Medicine."
Credits: Photo: Dominick Reuter

Caption:
Francis S. Collins, director of the National Institutes of Health, was the featured speaker at the 2014 Karl Taylor Compton Lecture at MIT. His talk was titled, "Exceptional Opportunities in Biomedical Research.”
Credits:
Photo: Dominick Reuter

Caption:
Collins urged the packed audience in Room 10-250 to “reflect on what our role is as scientists and citizens of the world.”
Credits:
Photo: Dominick Reuter

Caption:
Collins signs a copy of his book, "The Language of Life: DNA and the Revolution in Personalized Medicine."
Credits:
Photo: Dominick Reuter

National Institutes of Health Director Francis Collins yesterday urged an MIT audience to “reflect on what our role is as scientists and citizens of the world.”

“What we’re engaged in is a noble enterprise,” Collins told attendees at the Karl Taylor Compton Lecture, who filled Room 10-250. “It is an opportunity to alleviate suffering and reach out to those who need help.”

This is all the more important in the face of the current Ebola outbreak in West Africa, which has claimed nearly 5,000 lives and is expected to take many more, Collins said. He noted that the NIH has been supporting the search for Ebola vaccines since the mid-1990s, and now has two candidates poised to enter Phase II clinical trials in December. “I wish we were one or two years ahead of where we are now,” he added.

In what was undoubtedly the first Compton Lecture with a musical conclusion, Collins then summoned Pardis Sabeti, a Broad Institute researcher, guitarist Bob Katsiaficas, and the MIT Logarhythms a cappella group to help him lead the audience in performing a song, “One Truth,” which Sabeti and Katsiaficas wrote after the deaths of three of Sabeti’s colleagues in Sierra Leone who contracted Ebola last summer.

During his lecture, Collins also acknowledged the budget limitations that have forced his agency to cut back on its funding of medical research. That only makes it more difficult for the NIH to achieve the right balance between its two missions: supporting basic scientific research and applying new knowledge to enhance human health, Collins said.

“We talk about that every day at NIH,” he said. “I wish we had more resources so we could do more of both.”

Collins noted that MIT received $103 million in NIH funding in fiscal year 2014 and highlighted some of the projects supported by that money. Linda Griffith, a professor in MIT’s biological engineering and mechanical engineering departments, is working on a “liver on a chip” — a small device designed to mimic the three-dimensional architecture of the human liver, allowing researchers to test potential drugs before they go into clinical trials. One version of the chip also includes breast cancer cells, enabling an investigation of what happens when cancer metastasizes to the liver.

Projects like this could help translate the vast amount of information scientists have learned about the molecular basis of disease into treatments for patients. Scientists now understand the causes of nearly 5,500 diseases, but effective therapies exist for only about 500 of those, Collins noted. “There’s a huge gap between what we know and what we’re able to do,” he said.

Devices such as the liver on a chip could help close that gap by reducing the time it takes to get a potential drug from the discovery process to approval by the U.S. Food and Drug Administration — a process that currently takes an average of 14 years.

“This kind of technology is enormously promising for understanding biology, and also to speed up the process of identifying what is a safe and effective drug,” Collins says.

Several MIT researchers were also among the recipients of the recently announced NIH Brain Initiative grants. Six of the 58 grants went to MIT, more than any other institution. At this early stage, most of the projects are dedicated to developing new technologies that will eventually help researchers understand how the brain’s 86 billion neurons communicate with each other to perform functions such as forming memories, processing sensory information, and initiating movement.

“It’s an audacious idea that we might be able to understand how circuits in the human brain do the amazing things they do,” Collins said.

Asked how scientists can help to persuade government officials and the public that scientific research deserves more resources, Collins said that all scientists should be ready to explain their work to anyone who asks about it.

“The job we all have is to be prepared at any moment to explain what we do and why it matters,” he said. “I don’t think the science community has a voice that has been heard as loudly as it should in terms of the importance of what we do.”

He also pointed out some achievements of health research over the past several decades. Over the past 60 years, U.S. deaths from cardiovascular disease have dropped 70 percent, while deaths from cancer are now falling by about 1 percent a year, a modest but hard-fought advance. Furthermore, patients diagnosed with HIV can now expect to live a full lifespan; 30 years ago, the diagnosis was considered a death sentence.

“We need to be tireless in making people aware of why this is a very important investment in our nation,” Collins said.