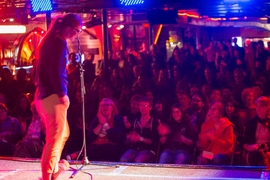 What are the best ways to get the general public interested in science? Last year a large MIT workshop convened dozens of scientists, artists, bloggers, citizen-scientists, and journalists to examine new grassroots forms through which people are engaging with science. Now four MIT scholars have co-written a report, “The Evolving Culture of Science Engagement,” stemming from the event, which outlines the rapidly changing science-outreach scene. MIT News spoke with John Durant, director of the MIT Museum, and David Kaiser, the Germeshausen Professor of the History of Science and director of MIT’s Program in Science, Technology, and Society, about the issue.

Q. What is the evolving culture of science engagement?

Durant: There is a tremendous proliferation of new forms of science engagement. Back in the day, you were really talking about journalism, public lectures, radio or television documentaries, museum and science centers, and not terribly much more. But today we have people doing stand-up comedy based around matters scientific; We have storytelling initiatives, with people converging in pubs and clubs to hear scientists talking about their own lives and their work; and we have people who are having extraordinary success with science in social networks, on YouTube, and so on. We have science cafes, which are now on every continent except Antarctica, so far as I know. The scene has become much buzzier, much more diverse, and a lot of what’s going on has qualities we don’t traditionally associate with science. One of the most disconcerting qualities about it — and I’m being tongue-in-cheek — is that a lot of it seems rather cool.

Kaiser: Part of the expansion is technical, with many types of media to express in, from Twitter to podcasts. But it’s also a different style of trying to engage. There is an emphasis on humor, mystery, and the unknown. There’s a thing there. There is also an emphasis on the open-endedness of the research — there’s so much more that we don’t know than we do. That hasn’t always been the dominant message of writing for nonscientists in the past.

Q. This also seems fairly different in terms of the goals of public engagement, doesn’t it? In the past, outreach seemed intended to move the needle on political issues, often involving funding certain projects. This approach seems to be less direct.

Durant: The commonest name [for this topic] in the postwar period was “public understanding of science.” The presumption was the public didn’t understand science, but they should, and therefore you needed to appropriately present an appropriately simplified view of science that would be suitable for the lay public. [Now] there is a kind of presumption that science is inherently interesting, and we’re just going to pursue that interest.

It is true that some of the forms of science engagement we’ve been commenting on here go light on formal knowledge. And we don’t know that much yet — it’s a research issue — about conventional learning outcomes from these kinds of discussions. But all my instincts tell me that it’s more productive to hook people into conversations about science that they find genuinely interesting and relevant than it is to stand on the sidelines and yell at people as they go by, in hopes that something will happen.

Kaiser: It’s not to say the goal is ultimately not a more broadly informed citizenry and education — those are great things. But why are people from all walks of life looking to learn more about science? How are they encountering scientists in the real world? And that’s what we wanted to zero in on. It is more creatively chaotic than the range of models we’ve tended to think about over much of the 20th century.

Q. The report talks about the “mainstreaming” of science in culture, with regard to the contributions from artists or citizen-scientists or nonscientist bloggers. But how do we see this regarding scientists themselves?

Kaiser: We can look at the enormous variety of active research scientists who also have very active science-engagement lives. This model could no longer be called what is derisively termed the “Carl Sagan model,” unfairly — that he did good science, stopped doing good science, and started doing outreach. Today there’s just no way one could even pretend to maintain that division, when you look at the number of really prominent, top-notch research scientists also blogging every other day with huge audiences, and pausing to help make movies like “Particle Fever.” It’s not an either-or situation now. The model is share — not necessarily teach — but share and express.

Q. We’ve seen science get personal before: James Watson’s “The Double Helix” [1968] was a bestseller in part because it was gossipy. Was it just too far ahead of its time to spark a larger trend?

Kaiser: That’s among the great earlier outliers of the 20th century. Another one is “A Brief History of Time,” by Stephen Hawking [1988], which clearly is a dramatic life narrative along with [material] about the Big Bang and black holes. And then downstream from Hawking’s book, by the 1990s it was not uncommon to find something like the personal in popular books by scientists, but that was one formulation. But now the range has really been expanded.

If we think about Richard Feynman’s immensely popular memoir, “Surely You’re Joking, Mr. Feynman,” that came out in 1985, that same year he published one of his most successful popular science books, “QED: The Strange Theory of Light and Matter.” Both become enormously successful bestsellers. The “Surely You’re Joking” book has virtually no discussion of scientific concepts in it, while “QED” has magnificent explanations of quantum physics but virtually no personal anecdotes or stories. Even in the mid-1980s, there was a line between those approaches. What had once seemed like a clear division is now very often blurred, often in very creative ways.

Q. What are your next steps in this area?

Durant: Having started this conversation, we want to see it continue. I feel MIT is really well-placed to be a convener of that kind of conversation. Just making the community of interests here collectively aware of all this stuff is itself a very valuable thing. But there is a lot here we don’t know and don’t understand well enough. Without trying to be comprehensive and encyclopedic, we would like to get a better understanding of this rich ecology of science engagement. … It would be nice to know more about what people are getting from this, their motives for attending [events], the outcomes. Mapping the communities of interest growing up online, which ones have been engaged effectively — those are interesting questions.

The report was co-written by Durant and Kaiser with Thomas Levenson, director of MIT’s Graduate Program in Science Writing; Ben Wiehe, manager of the Science Festival Alliance at the MIT Museum; and Peter Linett of the group culturekettle and Slover Linett Audience Research, a social research firm. The workshop was supported by the Noyce Foundation, the Alfred P. Sloan Foundation, the MacArthur Foundation, Intel, the Wellcome Trust, and, at MIT, the Program in Science, Technology, and Society; the deans of the School of Humanities, Arts, and Social Sciences and the School of Science; the Department of Physics; and the Knight Science Journalism program.

What lies ahead for science and science writing?