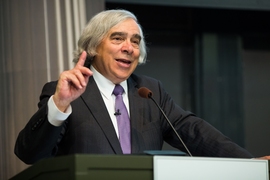 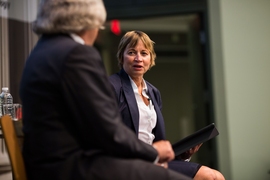 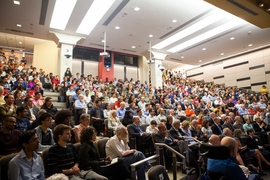 ↓ Download Image
Caption: Moniz’ talk, held before an overflow crowd in MIT’s Huntington Hall, was part of the Institute’s Compton Lecture series that has continued since 1957.

Caption:
Moniz’ talk, held before an overflow crowd in MIT’s Huntington Hall, was part of the Institute’s Compton Lecture series that has continued since 1957.

Ernest J. Moniz, who in January left his position as the 13th U.S. Secretary of Energy, spoke on Thursday about his long and ongoing history at MIT, and about his current work focusing on two major threats the world faces: nuclear weapons and global climate change, both of which were central to his role in the last administration.

The talk, held before an overflow crowd in MIT’s Huntington Hall, was part of the Institute’s Compton Lecture series that has continued since 1957. President L. Rafael Reif introduced Moniz, who is the Cecil and Ida Green Professor of Physics and Engineering Systems Emeritus and special advisor to the MIT president, and noted that Moniz’ “record of accomplishment that would stand out in any context.” This record includes his years as chair of the Department of Physics, his role as founding head of the MIT Energy Initiative, and his three tours of duty in Washington. Moniz served twice in the Clinton administration and then for four years in the Obama administration, when he was appointed to run the Department of Energy by a 97 to 0 vote in the Senate.

In that post, Moniz said he had the great opportunity of working for a president who “put the clean energy and climate agenda and the nuclear security agenda very high in their set of priorities.” As a result, he was able to play a major role in the achievement of two significant international agreements: the Paris Agreement on climate change, and the Iran nuclear pact, both of which were finalized in 2015.

The two global threats that these agreements addressed are very different in nature, he said: Whereas the use of nuclear weapons would be a rapidly devastating event, climate change “is more like a slow-motion train wreck.” Back in 1992, he said, when he began his first stint at the DoE, “it seemed that we were on a path to managing both problems.” That year saw the signing of the Kyoto agreement on climate change, which, he reminded the audience, is a treaty, ratified by the Senate, calling for stabilization of greenhouse gases at a level that is sustainable. “We are committed to that,” he said. In addition, negotiations led to the beginning of drastic reductions in U.S. and Russian nuclear weapons stockpiles.

But the road since then has been far from smooth, and now the Paris Agreement on climate change, which Moniz helped to negotiate on behalf of the U.S., is under threat from the new administration and its energy secretary. “Bluntly, especially from the point of view of a policymaker, in my view it is completely laughable to say that the state of the science is not one on which we should take a prudent approach,” he said, noting that the Paris accord, to which 197 nations all agreed, represented such a prudent approach.

Given the U.S. Congress’s insistence, in passing the Kyoto agreement, that there be full international participation, the consensus reached in Paris represented a significant victory, he said: “This path has led us to where we want to go.”

Under the terms of that agreement, Moniz pointed out, the earliest the U.S. could actually withdraw from it, as the Trump administration has pledged, would be Nov. 4 2020, at the very end of its term.

He pointed out that with a single storm, hurricane Irma, a single company, Florida Power and Light, faced an estimated $4 billion in recovery costs. As such storms increase in intensity in a warming world, he said, “it’s a lot cheaper to mitigate than to adapt later. …There’s no going back.”

“We are going to a low-carbon future,” he added. “It’s clearly in the cards. If we don’t pursue the course, we’ll get to the same place, but it will be a rougher road.”

The transition to that worldwide low-carbon energy future, he said, “means there will be a multi-trillion-dollar market. No matter what you think on the climate side, decreasing our research programs doesn’t make sense.”

As for the threat posed by nuclear weapons, “the risk of a misunderstanding leading to the use of a nuclear weapon is probably higher today than at any time since the Cuban missile crisis,” he said.

To try to mitigate that threat, Moniz joined with former U.S. Senator Sam Nunn at a nonprofit organization called the Nuclear Threat Initiative, where Moniz is now the CEO. The organization advocates for negotiations, modeled on some nuclear weapons reduction programs that worked in the 1980s, to address the threats of weapons of mass destruction.

One significant accomplishment toward that end, he said, was the nuclear pact that he, along with then-Secretary of State John Kerry, negotiated with Iran. The highly technical agreement, which included meticulously detailed plans for verification measures, was made possible in part by the fact that of the four-person negotiating team – Kerry, Moniz, and their Iranian counterparts – three had PhDs from American universities (two of them from MIT), and all of them were able to negotiate in English without needing translators.

That agreement, he said, with its strong verification, “buys us a decade or 15 years of time, which could be used wisely” to negotiate further. If, instead, this administration fails to certify Iran’s compliance, “even though the IAEA says they are doing everything they are supposed to do, our European friends [who are also party to the agreement] are going to be not happy. That’s one more opportunity to put a wedge between us and our allies.”

As for North Korea, he said, an approach is needed that looks more broadly at the situation rather than just focusing on the nuclear weapons. “We have not had a serious dialog with China; we are not addressing all the issues that China is concerned with,” he said.

“I think that we do need to restart diplomacy. And that does not consist of choosing the most colorful words you can think of. We need to get a framework together that addresses all of our security concerns. … We have got to get back into the business of diplomacy, and then we can get to some progress.”

Celebrating the homecoming of Ernest Moniz