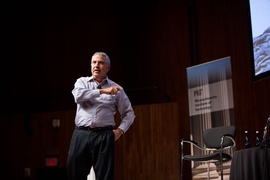 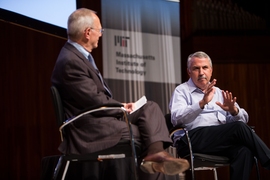 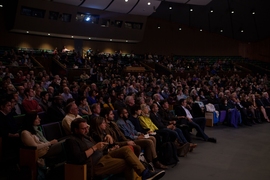 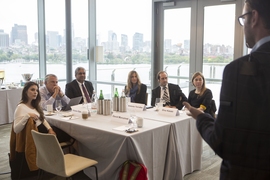 “We’re in the middle of three giant accelerations,” Friedman said. Changes involving markets, the Earth’s climate, and technology are reshaping social and economic life in powerful ways and putting a premium on “learning faster, and governing and operating smarter,” across the globe, he said.

“Technology is now accelerating at a pace the average human cannot keep up with,” Friedman added, emphasizing a key theme of his talk.

Friedman discussed the year 2007, in particular, as a moment full of innovations and new technologies being brought to market — a moment which “may be understood in time as one of the greatest technological inflection points” in recent history. However, the global recession that soon followed created even more stress, leading to civic repercussions we are confronting today.

“A lot of people got completely dislocated,” Friedman said.

A longtime reporter and columnist for The New York Times, Friedman gave his talk, “Thank You for Being Late: An Optimist’s Guide to Thriving in the Age of Accelerations,” before a large audience in MIT’s Kresge Auditorium. And while Friedman’s remarks warned of the dangers facing society, he also stressed the opportunities open to people around the world.

After all, Friedman noted, changes in communications platforms mean that “anyone can participate in the global conversation” occurring online today.

The Karl Taylor Compton Lecture Series, which began in 1957, is among MIT's most prominent lecture events. It honors the memory of Karl Taylor Compton, who served as MIT’s president from 1930 to 1948 and chair of the MIT Corporation from 1948 to 1954.

As MIT President L. Rafael Reif stated in his introductory remarks, Compton “guided MIT through the Great Depression and World War II. In the process, he helped the Institute transform itself from an outstanding technical school … to a great global university.”

Moreover, Reif added, Compton, who was himself a physicist, “brought a new focus on fundamental scientific research, and he made science an equal partner with engineering at MIT.”

In his remarks Reif also hailed Friedman, a three-time winner of the Pulitzer Prize, saying, “Tom is a global citizen and advocate for creative solutions to complex problems.” Friedman’s writing, Reif noted, “has helped shape the national conversation on the most important issues of our time.”

“Later will be too late”

During much of his talk, Friedman discussed the nature of the transformations in markets, climate, and technology, stating that they were “actually melding together into one giant change” in certain ways.

Changes in the nature of globalization, he said, from the expansion of global commerce to the development of global communication, are one reason why “we’re going from a world that is interconnected to interdependent.”

In his writings, Friedman has long warned of the dangers of climate change, and he underscored the seriousness of the issue in his lecture.

“Later will be too late,” said Friedman, regarding the need for serious climate action.

Meanwhile, Friedman observed, people have never had to adapt to so many significant technological innovations in any previous historical epoch.

“There was no bow and arrow 2.0 in the 13th century,” Friedman added, referring to the more languid pace of technological change in earlier times.

At a time of flux, however, our new technologies may be creating circumstances in which determined individuals can make an impact on the world in ways that might not have been possible before. To do so, he emphasized, often requires creativity.

“Never think in the box,” Friedman said. “Never think outside the box. Think without a box.”

At the end of his talk, Friedman answered audience questions presented by Reif. Among other things, Friedman decried the current state of U.S. politics, saying the political culture has “moved from partisan to tribal,” and warning that the U.S. could be facing civil strife reminiscent of the turmoil he covered in Lebanon at the start of his career, in the late 1970s and early 1980s.

On the other hand, Friedman added, he is “still a huge believer in America,” based mostly on the efforts of everyday citizens to “meld together” in an inclusive society of opportunity.

“If you want to be an optimist today about America, stand on your head,” Friedman said. “It looks so much better from the bottom up.”