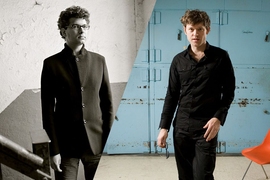 Ingmar Bergman’s “Persona” is regarded as a classic of 20th-century cinema, a powerful and enigmatic exploration of the human psyche in turmoil. Now, thanks to MIT theater director Jay Scheib and MIT composer Keeril Makan, here comes “Persona,” the opera.

That’s right: “Persona,” a film famous partly because of its use of silence — the lead character has gone mute — has a new incarnation that rewards close listening, in the form of Scheib’s libretto and Makan’s score. Now their project, which they began in 2009, is set to debut this month. The opera version of “Persona” will have a workshop performance at MIT on Oct. 17, then a formal premiere at the National Sawdust theater in Brooklyn, New York, on Oct. 23 and 24.

"I was fascinated by the concept of using a multi-dimensional object [the film] as material," says Scheib, a professor and the director of the Theater Arts program at MIT, who originally had the idea of adapting the film.

Makan, as the composer, says it was very much the abundance of silence in Bergman’s “Persona” that led him to think an opera version of the story was possible.

“Because of the silence, there’s a lot of room for music,” says Makan, an associate professor of music at MIT who is widely acclaimed for his compositions. “There is a soundtrack [in the film], but it’s pretty minimal. It seemed like there was space for music, and it seemed like the kind of topic music could address. Issues that would be silent in the movie can be colored by the music.”

What’s it all about, then?

“Persona” was released in 1966 and quickly hailed as a powerful effort. The cultural critic Susan Sontag called “Persona” a “masterpiece,” and it remains, by most accounts, the second-most esteemed film Bergman made, after “The Seventh Seal.” In 2012, the British Film Institute listed “Persona” as one of the 20 best films ever.

Still, “Persona” can be challenging to apprehend. The story revolves around an actress named Elisabet, played by Liv Ullman, who is apparently depressed and has almost completely stopped talking, cutting off contact with her family. Elisabet is cared for by a nurse, Alma, played by Bibi Andersson, who seems to become increasingly unstable as the film goes on, while becoming bound up further and further in Elisabet’s fraught identity. (Alma does most of the speaking in the film.)

The film delves into matters such as the stability of personal identity, the strength or weakness of familial bonds and love, and the effects of isolation, with Europe’s traumatic 20th-century history informing some scenes. But there are many ways to construe the film, and Bergman himself once told the critic John Simon that the audience could think “freely of what I have put at its disposal.”

Makan and Scheib certainly believe there is room for a number of perspectives on the material in “Persona.”

“I think the enigmatic quality of the movie allows it to be interpreted,” Makan says. “That’s what makes it a great movie, I think — there’s no one interpretation.”

Moreover, he adds, “I don’t think I have as negative a view of what’s transpiring as Bergman did. For him it’s this very bleak existential moment, and both Alma and Elisabet fall apart in a sense.” But as Makan sees it, Elisabet’s apparent depression can also lead to a reconstitution, a new beginning for one’s self.

For his part, Scheib says he is "very struck by the beauty of the film" and has incorporated a strong visual element into the production, which is staged as a film set, and features a film of the production playing as the opera unfolds. And Scheib stresses that the opera is the product of a "rich cross-disciplinary collaboration" involving many people in MIT's Music and Theater Arts program, not just himself and Makan.

As a recognized classic, “Persona” continues to have an audience: Cambridge’s Brattle Theater, a revival house not far from MIT, showed the film recently. But Makan and Scheib do not believe knowledge of the film is a prerequisite for enjoying the opera.

"You don't have to see the film to see the opera," Scheib emphasizes.

Whether their audience has already seen Bergman’s “Persona” or not, Scheib and Makan hope everyone will remain open to the possibilities of the story, rather than assuming they will be experiencing a wholly grim interpretation of Elisabet and Alma.

“I think it would have been hard to write something that just gets deeper and deeper into a bleak and unrelenting space,” Makan says. “It would have been hard for the listener to be in that sonic space for that long.” Completing the project might not even have been possible, Makan suggests, with a totally dark view of the story.

“I try to write beautiful music,” Makan adds. “And for that to exist, there has to be some hope.”

Boston Globe reporter David Weininger writes about “Persona,” a new opera by Prof. Jay Scheib and Prof. Keeril Makan, based on a 1966 Ingmar Bergman film. The opera is staged as if the action is being filmed, which allows viewers to be “more involved with what’s happening than I think they’re expecting,” explains Makan.