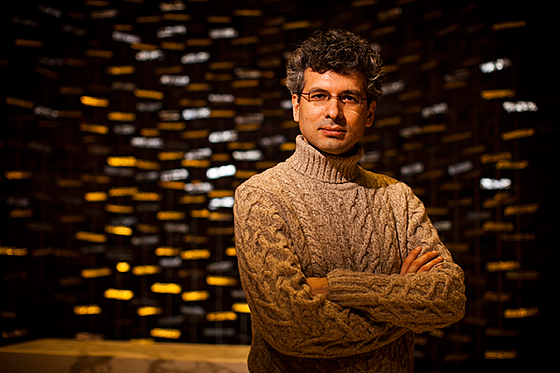 When he was in high school, Keeril Makan visited MIT as a prospective student. The trip still stands out in his memory: Touring campus, Makan saw MIT’s own Harold “Doc” Edgerton, the famous pioneering photographer, walking by. But when it came time to fill out college applications, Makan, though a good student in science and math, gave MIT a pass. Even as a teenager, he wanted to spend as much time as possible composing music — and Makan did not realize there was a flourishing music program at MIT.

As fate would have it, though, Makan, now a highly regarded contemporary composer, has returned to MIT — where he is writing music on a more ambitious scale than ever before. Known for inventive pieces that blend cutting-edge and classical elements, Makan has a string quartet set that premiered in October; has recently written the score for his first opera; and continues to create a variety of shorter pieces.

It is a not a circumstance Makan would have envisioned a decade ago. But then, the composer, who recently earned tenure in MIT’s Program in Music, has learned to embrace unpredictability, in his career and his work.

“To be alive is to be aware of change, and I try to let it be reflected in the music I write,” Makan says. “I never know what the piece is going to be until I get into the process of composing. It just reflects where I am in my life and what is happening at that moment.”

No more fiddling around

Makan grew up in New Jersey, with parents who appreciated music but did not expect him to create it. “There was certainly music in the house, but not music making,” he says.

That changed when Makan took up the violin, in the fourth grade. “I was inspired, I’m embarrassed to say, by an episode of ‘The Muppet Show’ where the Charlie Daniels Band was on,” Makan says; the group performed “The Devil Went Down to Georgia,” a pop hit with a distinctive fiddle riff. “I liked the fiddling,” Makan admits.

After also trying the oboe for a while, Makan stuck with the violin, as a performer. He first started writing music during a couple of summers in high school when he attended music camp at the Interlochen Center for the Arts in Michigan. Eventually Makan chose to attend Oberlin College, where he double-majored in music composition and religious studies — and soon stopped playing the violin.

“I didn’t like performing that much,” he says. “I liked playing violin, but I found it very nerve-wracking to actually play solos.” By his mid-20s, Makan went back to playing, but in the meantime he focused even more on composition, earning his PhD in the field from the University of California at Berkeley. Among the composers whose work engaged him the most, he says, were Gyorgy Ligeti, of Hungary, the late Frenchman Gerard Grisey, and Salvatore Sciarrino, a contemporary Italian composer.

Before long, Makan had started attracting attention with distinctive pieces such as “2,” a 1998 composition — written while studying briefly with MIT’s John Harbison — created for violin and percussion only. “It’s an unusual combination of instruments,” Makan concedes. “It [represented] a stripping down of influences. I had these influences of contemporary music, classical music, new music, folk music, and this was the first piece that brought them together.”

Makan had another productive spell in Helsinki, thanks to a Fulbright grant, where he wrote a piece commissioned by the Bang on a Can All-Stars — the first time he worked with MIT composer and performer Evan Ziporyn. An ensuing string quartet written for the Kronos Quartet, “The Noise Between Thoughts,” corresponded with Makan’s return to playing violin in a serious way. “That changed the types of sounds I was attracted to,” Makan says.

Soon after, in 2006, Makan arrived at MIT and finished a new string quartet, “Washed by Fire,” which he says marked the beginning of a new phase in his career. Previously, Makan says, he felt that “lyricism, classical music, was part of the past, and not something to be a part of music making in the present.” But instead of keeping his music strictly within an avant-garde mode, Makan “discovered a new openness to all the different interests I had,” and began to “explore timbre, melodic writing, complex writings, in [my] own language.”

At MIT, Makan has also refined his teaching methods. His goal with students, he says, is simply to “get them working creatively with music in a way they find satisfying.” Most of his students are juggling music with other academic priorities, although some have chosen a path similar to Makan’s. One of his former undergraduate students, Nina Young, was a double major in ocean engineering and music who now is pursuing a PhD in music composition at Columbia University.

In this new career phase, Makan has also diversified the types of compositions he is attempting, while returning to some familiar forms as well. His latest string quartet premiered at Pickman Hall in Cambridge in October, performed by the Pacifica Quartet, as part of the Celebrity Series of Boston.

The opera for which Makan has written the score is an interpretation of “Persona,” the 1966 film by Swedish director Ingmar Bergman; the libretto is by Jay Scheib, an associate professor in MIT’s Theater Arts program. The opera, like the film, is about “the fact that our identity is constructed,” Makan says. “There are masks that we wear throughout our lives that change, they are not permanent.”

Makan is also beginning work on an hourlong concert piece, commissioned by the group Either/Or, which he expects to finish next summer. The composition “is in the dreaming state” right now, Makan says.

Thematically, Makan adds, the recurrence of certain motifs in the new quartet represents “a balance between the illusion that events repeat themselves and the reality that nothing ever returns unaltered.” It is an idea that has run through Makan’s mind when he “physically returns to places I have visited before in my life, [while] visiting them under different circumstances.”

Sounds like a notion well-suited to a onetime prospective MIT student who has returned to the Institute as a full-fledged composer.

David Weininger reports for The Boston Globe on the Radius Ensemble’s performance of “Nothing is More Important,” a piece composed by MIT Professor Keeril Makan. “Makan's piece begins with an obsessive focus on a single note, from which it never completely escapes,” writes Weininger.