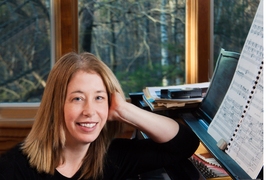 For MIT composer Elena Ruehr, this November is a memorable one: Three of her pieces are making concert premieres this month. “Eve,” a cantata, debuted Nov. 8 in Boston; “It’s About Time,” a chamber piece, had its first performance Nov. 16, in San Francisco; and on Nov. 21, MIT’s Kresge Auditorium will be the setting of the first performance of “Cassandra in the Temples,” an a cappella opera Ruehr has written with librettist Gretchen Henderson. “Cassandra,” based on the classical myths of Cassandra, will be performed by the award-winning vocal ensemble Roomful of Teeth. MIT News spoke with Ruehr, who is also a lecturer in MIT’s music program, about her work.

Q. You’ve got three premieres this month. Did you work on these pieces at the same time, or do you try to keep all your projects distinct when you are working on them?

A. The truth is I don’t work on more than one piece at one time. I find that really difficult. But what I do have is a set of deadlines. … I work knowing that I will have to finish something by a certain time, and then I can start the next thing. So I wrote these things one after another.

I wrote the piece that’s being done in San Francisco, “It’s About Time,” first, and it was commissioned first. And I had a good long year to work on it. So it was finished by the time I started my cantata.

I once wrote two pieces at the same time. One is called “Song of the Silkie,” and it’s a little one-man opera for a singer and string quartet that I wrote with Laura Harrington, who teaches at MIT. I wrote it at the same time I wrote another piece, called “The Law of Floating Objects,” which is for five flutes. They are very, very different kinds of pieces, and they sound very different — you could almost think they are by two composers. And maybe I was able to write those two at the same time because they are so different. But usually I just don’t like the feeling of working on more than one thing at the same time.

Q. What is it about the myths of Cassandra that appealed to you, and how did the idea of an a cappella opera enter into the project?

A. I was really interested in the idea of somebody telling the truth and having nobody believe it. I thought that was a very contemporary subject. And I was thinking of everything from Al Gore, with his “inconvenient truth” [on climate change], to the fear-mongering in politics today — there is this space between hyperbole, reality, and the truth. So it’s interesting to me for those reasons. Sometimes the luxury of being an artist is you don’t have a direct answer to a question like that, but you want to exist in the space of the question.

[An a cappella opera] was my dream for many years, even before I met Gretchen [Henderson, Ruehr’s collaborator on the project]. The original idea was to have a piece for dancers and singers, and we hope someday to stage the piece with dancers. So the idea is to have sort of a celebration of just what humans can do with their voices and their bodies, and there’s something elemental and cool about that. It’s only when I heard Roomful of Teeth that I thought, “They could do this, and it would be very exciting to do it with them.” That was what made it go from a dream to reality.

Q. For people attending a performance of your work for the first time: What would you like for them to keep in mind about your music?

A. I suppose all three of these pieces that I’ve written are very different pieces, for very different performing ensembles, but all three of them have a kind of audience-friendly surface. The composer always thinks of music as a little simpler than the audience does, but in this case, these pieces have a kind of immediate surface, tunes and melodies, things that are easy to grab on to. At the same time my mission is to make things have a depth by constructing them in certain ways. For those people who aren’t [fully] into contemporary music, or scared off by it, a lot of contemporary music, not just mine, is quite a bit more audience-friendly than it used to be, and more directly emotional.

Three new works composed by MIT lecturer Elena Ruehr are premiering over the coming weeks, reports David Weininger for The Boston Globe. “The next two weeks constitute a sort of bicoastal mini-festival of new works by Ruehr,” he writes. “It’s an enviable burst of activity for any composer.”

Keith Powers writes for WBUR about the upcoming premieres of three new works by MIT lecturer and composer Elena Ruehr. “Most composers are happy to have one premiere of a major work every year. Elena Ruehr has three in November alone,” explains Powers.