A new act for opera 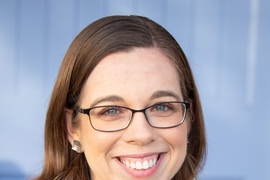 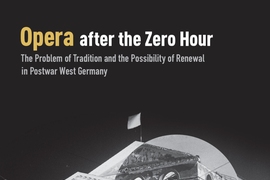 In November 1953, the Nationaltheater in Mannheim, Germany, staged a new opera, the composer Boris Blacher’s “Abstrakte Oper Nr. 1,” which had debuted just months previously. As it ran, music fans were treated to both a performance and a raging controversy about the work, which one critic called “a monstrosity of musical progress,” and another termed “a stillbirth.”

Some of this vitriol stemmed from Blacher’s experimental composition, which had jazz and pop sensibilities, few words in the libretto (but some nonsense syllables), and no traditional storyline. The controversy was heightened by the Mannheim production, which projected images of postwar ruins and other related tropes onto the backdrop.

“The staging was very political,” says MIT music scholar Emily Richmond Pollock, author of a new book about postwar German opera. “Putting these very concrete images behind [the stage], that people had just lived through, produced a very uncomfortable feeling.”

It wasn’t just critics who were dubious: One audience member wrote to the Mannheim morning newspaper to say that Blacher’s “cacophonous concoction is actually approaching absolute zero and is not even original in doing so.”

In short, “Abstrakte Oper Nr. 1” hardly fit its genre’s traditions. Blacher’s work was introduced soon after the supposed “Zero Hour” in German society — the years after World War Two ended in 1945. Germany had instigated the deadliest war in history, and the country was supposed to be building itself entirely anew on political, civic, and cultural fronts. But the reaction to “Abstrakte Oper Nr. 1” shows the limits of that concept; Germans also craved continuity.

“There is this mythology of the Zero Hour, that Germans had to start all over again,” says Pollock, an associate professor in MIT’s Music and Theater Arts Section.

Pollock’s new book, “Opera after the Zero Hour,” just published by Oxford University Press, explores these tensions in rich detail. In the work, Pollock closely scrutinizes five postwar German operas while examining the varied reactions they produced. Rather than participating in a total cultural teardown, she concludes, many Germans were attempting to construct a useable past and build a future connected to it.

“Opera in general is a conservative art form,” Pollock says. “It has often been identified very closely with whomever is in power.” For that reason, she adds, “Opera is a really good place to examine why tradition was a problem [after 1945], and how different artists chose to approach that problem.”

The politics of cultural nationalism

Rebuilding Germany after 1945 was a monumental task, even beyond creating a new political state. A significant part of Germany lay in rubble; for that matter, most large opera houses had been bombed.

Nonetheless, opera soon bloomed again in Germany. There were 170 new operas staged in Germany from 1945 to 1965. Operationally, as Pollock notes in the book, this inevitably meant including former Nazis in the opera business — efforts at “denazification” of society, she thinks, were of limited effectiveness. Substantively, meanwhile, the genre’s sense of tradition set audience expectations that could be difficult to alter.

“There’s a lot of investment in opera, but it’s not [usually] going to be avant-garde,” Pollock says, noting there were “hundreds of years of opera tradition pressing down” on composers, as well as “a bourgeois restored German culture that doesn’t want to do anything too radical.” However, she notes, after 1945, “There are a lot of traditions of music-making as part of the culture of being German that feel newly problematic [to socially-aware observers].”

Thus a substantial portion of those 170 new operas — besides “Abstrakte Oper Nr. 1” — contained distinctive blends of innovation and tradition. Consider Carl Orff’s “Oedipus der Tyrann,” a 1958 work of musical innovation with a traditional theme. Orff was one of Germany’s best-known composers (he wrote “Carmina Burana” in 1937) and had professional room to experiment. “Oedipus der Tyrann” strips away operatic musical form, with scant melody or symphonic expression, though Pollock’s close reading of the score shows some remaining links to mainstream operatic tradition. But the subject of the opera is classical: Orff uses the German poet Friedrich Holderlin’s 1804 translation of Sophocles’ “Oedipus” as his content. As Pollock notes, in 1958, this could be a problematic theme.

“When Germans claim special ownership of Greek culture, they’re saying they’re better than other countries — it’s cultural nationalism,” Pollock observes. “So what does it mean that a German composer is taking Greek tropes and reinterpreting them for a postwar context? Only recently, [there had been] events like the Berlin Olympics, where the Third Reich was specifically mobilizing an identification between Germans and the Greeks.”

In this case, Pollock says, “I think Orff was not able to think clearly about the potential political implications of what he was doing. He would have thought of music as largely apolitical. We can now look back more critically and see the continuities there.” Even if Orff’s subject matter was not intentionally political, though, it was certainly not an expression of a cultural “Zero Hour,” either.

Opera is the key

“Opera after the Zero Hour” continually illustrates how complex music creation can be. In the composer Bernd Alois Zimmerman’s 1960s opera “Die Soldaten,” Pollock notes a variety of influences, chiefly Richard Wagner’s idea of the “totalizing work of art” and the composer Alban Berg’s musical idioms — but without Wagner’s nationalistic impulses.

Even as it details the nuances of specific operas, Pollock’s book is also part of a larger dialogue about which types of music are most worth studying. If operas had limited overlap with the most radical forms of musical composition of the time, then opera’s popularity, as well as the intriguing forms of innovation and experiment that did occur within the form, make it a vital area of study, in Pollock’s view.

“History is always very selective,” Pollock says. “A canon of postwar music will include a very narrow slice of pieces that did really cool, new stuff, that no one had ever heard before.” But focusing on such self-consciously radical music only yields a limited understanding of the age and its cultural tastes, Pollock adds, because “there is a lot of music written for the opera house that people who loved music, and loved opera, were invested in.”

Other music scholars say “Opera after the Zero Hour” is a significant contribution to its field. Brigid Cohen, an associate professor of music at New York University, has stated that the book makes “a powerful case for taking seriously long-neglected operatic works that speak to a vexed cultural history still relevant in the present.”

Pollock, for her part, writes in the book that, given all the nuances and tensions and wrinkles in the evolution of the art form, “opera is the key” to understanding the relationship between postwar German composers and the country’s newly fraught cultural tradition, in a fully complicated and historical mode.