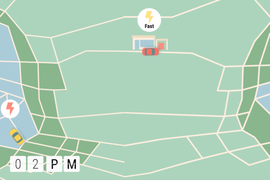 ↓ Download Image
Caption: MIT researchers have found that installing charging stations on residential streets and along highways could lead to wider adoption of clean vehicles.
Credits: Courtesy of Trancik Lab

Caption:
MIT researchers have found that installing charging stations on residential streets and along highways could lead to wider adoption of clean vehicles.
Credits:
Courtesy of Trancik Lab

A new study from researchers at MIT uncovers the kinds of infrastructure improvements that would make the biggest difference in increasing the number of electric cars on the road, a key step toward reducing greenhouse gas emissions from transportation.

The researchers found that installing charging stations on residential streets, rather than just in central locations such as shopping malls, could have an outsized benefit. They also found that adding on high-speed charging stations along highways and making supplementary vehicles more easily available to people who need to travel beyond the single-charge range of their electric vehicles could greatly increase the vehicle electrification potential.

The researchers developed a new methodology to identify charging solutions that would conveniently fit into people’s daily activities. They used data collected from GPS tracking devices in cars, as well as survey results about people’s daily driving habits and needs, including detailed data from the Seattle area and more general data from the U.S. as a whole. Greatly increasing the penetration of electric cars into the personal vehicle fleet is a central feature of climate mitigation policies at local, state, and federal levels, Trancik says. A goal of this study was “to better understand how to make these plans for rapid vehicle electrification a reality,” she adds.

In deciding how to prioritize different kinds of improvements in vehicle charging infrastructure, she says, “the approach that we took methodologically was to emphasize building a better understanding of people’s detailed energy consuming behavior, throughout the day and year.”

To do that, “we examine how different people are moving from location to location throughout the day, and where they are stopping,” she says. “And from there we’re able to look at when and where they would be able to charge without interrupting their daily travel activities.”

The team looked at both regular daily activities and the variations that occur over the course of a year. “The longitudinal view is important for capturing the different kinds of trips that a driver makes over time, so that we can determine the kinds of charging infrastructure needed to support vehicle electrification,” Wei says.

While the vast majority of people’s daily driving needs can be met by the range provided by existing lower-cost electric cars, as Trancik and her colleagues have reported, there are typically a few times when people need to drive much farther. Or, they may need to make more short trips than usual in a day, with little time to stop and recharge. These “high-energy days,” as the researchers call them, when drivers are consuming more than the usual amount of energy for their transportation needs, may only happen a handful of times per year, but they can be the deciding factor in people’s decision making about whether to go electric.

Even though battery technology is steadily improving and extending the maximum range of electric cars, that alone will not be enough to meet all drivers’ needs and achieve rapid emissions reductions. So, addressing the range issue through infrastructure is essential, Trancik says. The highest-capacity batteries tend to be the most expensive, and are not affordable to many, she points out, so getting infrastructure right is also important from an equity perspective.

Being strategic in placing infrastructure where it can be most convenient and effective — and making drivers aware of it so they can easily envision where and when they will charge — could make a huge difference, Trancik says.

“There are various ways to incentivize the expansion of such charging infrastructures,” she says. “There’s a role for policymakers at the federal level, for example, for incentives to encourage private sector competition in this space, and demonstration sites for testing out, through public-private partnerships, the rapid expansion of the charging infrastructure.” State and local governments can also play an important part in driving innovation by businesses, she says, and a number of them have already signaled their support for vehicle electrification.

Providing easy access to alternative transportation for those high-energy days could also play a role, the study found. Vehicle companies may even find it advantageous to provide or partner with convenient rental services to help drive their electric car sales.

In their analysis of driving habits in Seattle, for example, the team found that the impact of either adding highway fast-charging stations or increasing availability of supplementary long-range vehicles for up to four days a year meant that the number of homes that could meet their driving needs with a lower cost electric vehicle increased from 10 percent to 40 percent. This number rose to above 90 percent of households when fast-charging stations, workplace charging, overnight public charging, and up to 10 days of access to supplementary vehicles were all available. Importantly, charging options at residential locations (on or off-street) is key across all of these scenarios.

The study’s findings highlight the importance of making overnight charging capabilities available to more people. While those who have their own garages or off-street parking can often already easily charge their cars at home, many people do not have that option and use public parking. “It’s really important to provide access — reliable, predictable access — to charging for people, wherever they park for longer periods of time near home, often overnight,” Trancik says.

That includes locations such as hotels as well as residential neighborhoods, she says. “I think it’s so critical to emphasize these high-impact approaches, such as figuring out ways to do that on public streets, rather than haphazardly putting a charger at the grocery store or at the mall or any other public location.” Not that those aren’t also useful, she says, but public planning should be aiming to expand accessibility to a greater part of the population. Being strategic about infrastructure expansion will continue to be important even as fast chargers fall in cost and new designs begin to allow for more rapid charging, she adds.

The study should help to provide some guidance to policymakers at all levels who are looking for ways to facilitate the reduction of greenhouse gas emissions, since the transportation sector accounts for about a third of those emissions overall. “If you have limited funds, which you typically always do, then it’s just really important to prioritize,” Trancik says, noting that this study could indicate the areas that could provide the greatest return for those investments. The high-impact charging solutions they identify can be mixed and matched across different cities, towns, and regions, the reseachers note in their paper.

The researchers’ approach to analyzing high-resolution, real-world driving patterns is “valuable, enabling several opportunities for further research," says Lynette Cheah, an associate professor of engineering systems and design at Singapore University of Technology and Design, who was not associated with this work. “Real-world driving data can not only guide infrastructure and policy planning, but also optimal EV charging management and vehicle purchasing and usage decisions. … This can provide greater confidence to drivers about the feasibility and operational implications of switching to EVs.”

Prof. Jessika Trancik speaks with Forbes contributor Peter Cohan about the carbon emissions associated with gas, hybrid and electric vehicles, and the site she and her research group developed to allow consumers to compare personal vehicles against climate change mitigation targets. “In most locations, compared to [gas-powered vehicles], EVs produce emissions savings greater than 30%,” says Trancik. "Most savings are greater depending on the geographic location, the electricity supply, and the vehicle model.”

Prof. Jessika Trancik speaks with USA Today reporter Kate S. Petersen about claims that replacing all U.S. gas stations with equal capacity electric vehicle charging stations would require significant resources. “When we’re talking about EV charging, you don’t have to put charging stations everywhere you have gas stations today,” says Trancik. “This would not make sense as a plan for rolling out electric vehicle charging infrastructure.”

Washington Post reporter Steven Zeitchik highlights Prof. Jessika Trancik’s work developing a carbon counter that details the carbon impacts of different cars and MIT startup Form Energy, which is “taking the oxidization process, normally only good for ruining your Saturday garage clean-up, and deploying it to store energy on power grids.” Says Trancik of the importance of allowing people the ability to take stock of their environmental impact: “One of the really important aspects of addressing climate change is bringing everyone into the discussion.”

On The Interchange podcast, Prof. Jessika Trancik discusses her research exploring the cost declines in lithium-ion batteries and what it will take to reach mass-market adoption of electric vehicles.

Full story via The Interchange →

Prof. Jessika Trancik speaks with The Hill reporter Rachel Frazin about her research that demonstrates people can save more than 30% in emissions by switching to electric vehicles. “One can see an immediate reduction in greenhouse gas emissions, even with today’s power grid and today’s power supply. It’s a really important step to electrify as many vehicles as possible, and quickly,” says Trancik.

Prof. Jessika Trancik speaks with Jesse Remedios of WBUR about her new study that identifies locations where electric vehicle charging stations would have the most impact and help increase the adoption of electric vehicles. “It's important to make sure that chargers are placed where people can charge without having to delay their activities,” Trancik says.

Mashable reporter Sasha Lekach spotlights a new study by MIT researchers that finds installing more charging stations close to residences and in locations that match where people naturally stop, would help increase usage of electric vehicles. The researchers found that “this helps to make charging more accessible while drivers are going about everyday activities.”