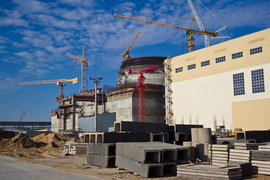 A new analysis by MIT researchers details many of the underlying issues that have caused cost overruns on new nuclear power plants in the U.S., which have soared ever higher over the last five decades. The new findings may help the designers of new plants build in resilience to the factors that tend to cause these overruns, thus helping to bring down the costs of such plants.

Many analysts believe nuclear power can play a significant part in reducing global emissions of greenhouse gases, and finding ways to curb these rising costs could be an important step toward encouraging the construction of new plants, the researchers say. The findings are being published today in the journal Joule, in a paper by an MIT team: professors Jessika Trancik and Jacopo Buongiorno, students Philip Eash-Gates SM ’19, Magdalena Klemun PhD ’20, Goksin Kavlak PhD ’18, and Research Scientist James McNerney.

Among the surprising findings in the study, which covered 50 years of U.S. nuclear power plant construction data, was that, contrary to expectations, building subsequent plants based on an existing design actually costs more, not less, than building the initial plant.

The authors also found that while changes in safety regulations could account for some of the excess costs, that was only one of numerous factors contributing to the overages.

“It’s a known fact that costs have been rising in the U.S. and in a number of other locations, but what was not known is why and what to do about it,” says Trancik, who is an associate professor of energy studies in MIT’s Institute for Data, Systems and Society. The main lesson to be learned, she says, is that “we need to be rethinking our approach to engineering design.”

Part of that rethinking, she says, is to pay close attention to the details of what has caused past plant construction costs to spiral out of control, and to design plants in a way that minimizes the likelihood of such factors arising. This requires new methods and theories of technological innovation and change, which the team has been advancing over the past two decades.

Many of the excess costs were associated with delays caused by the need to make last-minute design changes based on particular conditions at the construction site or other local circumstances, so if more components of the plant, or even the entire plant, could be built offsite under controlled factory conditions, such extra costs could be substantially cut.

Taking the containment buildings surrounding the reactor as an example of a cost component, certain design changes could help to reduce the costs, Trancik says. For instance, substituting some new kinds of concrete in the massive structures could reduce the overall amount of the material needed, and thus slash the onsite construction time as well as the material costs.

Many of the reasons behind the cost increases, Trancik says, “suggest that there’s a lack of resilience, in the process of constructing these plants, to variable construction conditions.” Those variations can come from safety regulations that are changing over time, but there are other reasons as well. “All of this points to the fact that there is a path forward to increasing resilience that involves understanding the mechanisms behind why costs increased in the first place.”

A more resilient design can help achieve cost savings: “If you’re having to go back and redo the design because of something about a particular site or a changing safety regulation, then if you build into your design that you have all of these different possibilities based on these things that could happen,” that can protect against the need for such last-minute redesign work and costly delays.

“These are soft costs contributions,” Trancik says, which have not tended to be prioritized in the typical design process. “They’re not hardware costs, they are changes to processes responding to the environment in which the construction is happening. … If you build that in to your engineering models and your engineering design process, then you may be able to avoid the cost increases in the future.”

One approach, which would involve designing nuclear plants that could be built in factories and trucked to the site, has been advocated by many nuclear engineers for years. For example, rather than today’s huge nuclear plants, modular and smaller reactors could be completely self-contained and delivered to their final site with the nuclear fuel already installed. Numerous such plants could be ganged together to provide output comparable to that of larger plants, or they could be distributed more widely to reduce the need for long-distance transmission of the power. Alternatively, a larger plant could be designed to be assembled on site from an array of smaller factory-built subassemblies.

“This relationship between the hardware design and the soft costs really needs to be brought into the engineering design process,” she says, “but it’s not going to happen without a concerted effort, and without being informed by modeling that accounts for these potential ballooning soft costs.”

Trancik says that while some of the steps to control costs involve increased use of automated processes, these need to be considered in a societal context. “Many of these involve human jobs and it is important, especially in this time, where there’s such a need to create high-quality sustained jobs for people, this should also factor into the engineering design process. So it’s not that you need to look only at costs.” But the kind of analysis the team used, she says, can still be useful. “You can also look at the benefit of a technology in terms of jobs, and this approach to mechanistic modeling can allow you to do that.”

The methodology the team used to analyze the causes of cost overruns could potentially also be applied to other large, capital-intensive construction projects, Trancik says, where similar kinds of cost overruns often occur.

“One way to think about it as you’re bringing more of the entire construction process into manufacturing plants, that can be much more standardized.” That kind of increased standardization is part of what has led, for example, to a 95 percent cost reduction in solar panels and in lithium-ion batteries over the last few decades, she says. “We can think of it as making these larger projects more similar to those manufacturing processes.”

Buongiorno adds that “only by reducing the cost of new plants can we expect nuclear energy to play a pivotal role in the upcoming energy transformation.”

The work was supported by the David and Lucille Packard Foundation and the MIT Energy Initiative.

Forbes contributor Dipka Bhambhani spotlights a new study by MIT researchers that examines the causes of cost overruns and delays in nuclear power developments, and finds they could have been “averted by building plants in factories and then installing them on site.”