The 2021 event, held in Kresge Auditorium and streamed live, was an unmistakable sign that MIT’s campus is up and running.
Zach Winn | MIT News Office
Publication Date:
Press Inquiries 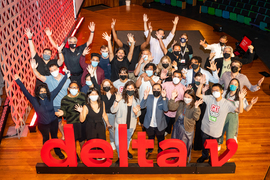 You know things are getting closer to normal at MIT when people gather at Kresge Auditorium to celebrate student entrepreneurs. That was the case Friday at the delta v summer accelerator’s capstone event, Demo Day.

None of the students who presented their startup success stories could have predicted the changing pandemic landscape they’d have to work through this summer. But the presentations — each interspersed with enthusiastic cheers from the audience as students announced company milestones — showed they were able to adapt.

“Everyone’s impressed, not only with the problems these teams are trying to solve, but also with the entrepreneurs behind them,” says Carly Chase, a senior lecturer at the MIT Sloan School of Management who directed the delta v program this year.

Each startup’s success was also a testament to the Martin Trust Center for MIT Entrepreneurship, which runs the delta v program and puts an emphasis on entrepreneurship education in addition to startup success. The Trust Center took lessons learned from running the program virtually last year and incorporated them into this summer’s hybrid model.

This year’s delta v cohort featured 20 teams. Chase says about half of participants were master’s students while the other half was evenly split between PhD candidates and undergraduates. Chase says the Trust Center continues to see increased interest from undergraduates.

“Students are coming to campus not just with ideas, but more baked ideas,” Chase says. “The popularity [of the program] across campus just keeps increasing somehow.”

Entrepreneurs on a mission

This year’s delta v cohort included more social impact startups than ever before. It was also the first to include more students from the School of Engineering than the Sloan School of Management.

The startups in this year’s cohort are solving problems in commercial industries like logistics, recruiting, and agriculture as well as problems that impact consumers more directly, like personal health and fitness.

One of this year’s startups, Almond Finance, is building a system to allow for money transfers between the hundreds of mobile wallets in use around the world. Most mobile wallets today exist in technological siloes that make transferring funds extremely cumbersome, but Almond’s system will allow users to send money through their phones quickly and affordably.

Almond’s founders say there are over 250 different mobile wallets in use around Southeast Asia alone.

“In Asia, mobile wallets are more advanced [than U.S. services like Venmo],” co-founder Yunus Sevimli MBA ’21 says. “People use them for everything from making purchases to giving loans and sending money — but there’s no way for mobile wallets to talk to each other right now.”

“Our online platform matches families with local professionals to design their plans,” says co-founder Mora Orensanz, a graduate student in the Department of Urban Studies and Planning. “We’re trying to make it cost-efficient by frontloading data collection about the family’s spatial needs and characteristics, and also educating the families to increase their construction literacy.”

Both Almond Finance and La Firme pivoted this summer to refocus their businesses, something Chase says is a good sign.

“In delta v, one thing we always hope is teams will have the confidence to pivot, and we had a lot of pivoters this year, whether it was the market, or the use case, or narrowing down their application to start,” Chase says. “That’s something we’re proud of and a good thing to normalize. You don’t need to come in here and think you know everything. You have to learn, and I think teams will be better for that in the long run.”

Ivu Biologics is building a platform to manufacture and deliver microbes based on biodegradable, non-microplastic materials. The team interviewed more than 150 potential customers as they explored different markets to enter before deciding their first use case will be in the agriculture space.

“Delta v is structured so that every month you have a set of goals, and having those goals pushes the teams to achieve them,” says Augustine Zvinavashe ’16, a current PhD candidate in the Department of Civil and Environmental Engineering. “The program does a really good job of helping you build the muscles for interviewing your customers, identifying the biggest problems they’re having, and building a solution to those problems.”

Other startups in this year’s cohort include Underdog Coaching, which helps university admissions teams with an online platform that lets prospective students find current students and alumni to mentor them during the application journey; Havvi Fitness, which provides virtual fitness classes to users for free by monetizing other features of its service; Surge Employment Solutions, a workforce development, staffing, and mentoring company for formerly incarcerated people; Robigo, which is developing a technology to engineer plant microbiomes to reduce disease without using pesticides; Hibiscus Monkey, which aims to be India's first body specialist brand, addressing neglected parts of the body through skin actives and plant powered ingredients; Project Restore Us, which is partnering with community organizations and leveraging restaurant supply chains to provide meals to food insecure families in the Greater Boston area; and many more.

Although the format of delta v changed as the circumstances of the pandemic evolved, teams were often able to come to campus to use workspace, hold strategy sessions, network, and more. Most student participants were in the Boston area, but like last year, some participated from around the world.

“We spent a lot of time making sure it was equitable for everyone,” Chase says. “When we ran an in-person event in Boston, we did one virtually simultaneously.”

Student teams were also split into rotating “pods” of five and matched with entrepreneurs in residence (EiRs) in an effort to build tighter relationships and ensure accountability.

“The pods were meant to help students get to know people on other teams because meeting online with 20 teams can make that hard,” Chase says, noting the Trust Center hosted a number of social functions for each pod in addition to weekly meetings with EiRs. “I got to know my pod really well, and it removed the friction of having to get to know everyone. With a smaller group, you can share so much more.”

Other changes this year included a new version of investor day for teams and further involvement of delta v alumni, who talked to this year’s participants about what they got out of the program and answered questions.

Things weren’t quite back to normal at Demo Day, with numerous safety precautions in place, but they showed things are trending in the right direction on MIT’s campus.

“It’s great to be back in a room with people and feel the energy,” Bill Aulet, the managing director of the Trust Center and a professor of the practice at MIT Sloan, said in his opening remarks. “It’s been a long time.”