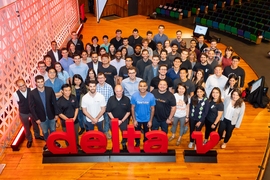 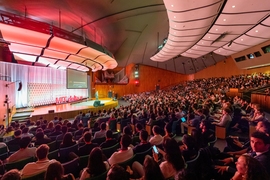 On Friday, student startups from this year’s MIT delta v accelerator presented their companies to a packed audience at Kresge Auditorium, in a celebration of entrepreneurship.

The entrepreneurs still have much work to do, and they each took very different paths to the stage, but the event, known as delta v’s Demo Day, was an opportunity to recognize the progress they’ve made so far.

“Today is my favorite day of the year,” said Bill Aulet, managing director of the Martin Trust Center for MIT Entrepreneurship, in his opening remarks. “This is a culmination of what happens at MIT in the field of entrepreneurship. There’s so many different resources and things going on, but today you see the best of the best from all those different places. You should celebrate the people, and you should save the programs you have, because these companies are going to do amazing things.”

In total, students from 23 startups made presentations, noting key milestones toward business growth to boisterous applause. This summer’s delta v program included 100 entrepreneurs who worked on their startups full time between June and September from either the Trust Center on campus or the MIT New York City Startup Studio. In addition to work and lab space, the startups also received equity-free funding, coaching and mentorship, and other support from the Institute.

This year’s group of startups included a virtual care clinic to help patients manage chronic conditions; an online community to help landlords and tenants fill apartment rentals; a “smart” inhaler that helps users improve adherence and their technique when using the device; a sewage treatment provider with a system that turns fecal sludge into electricity while cleaning the water; an online platform to match parents with underutilized childcare centers for last minute placements; an app that lets fans play fantasy sports during games; a robotic bartender for work functions; and many others.

Most of the startups have already begun working with customers, and all of them have tested their ideas outside of the lab. Aulet noted that several delta v startups have gone on to become foundational companies with huge valuations, or been acquired by leaders in their industry, though he said he’s most proud of the learning and impact that comes from the program.

“But it’s not just about the exits; it’s about the way [these companies] impact the world,” Aulet told the audience. “Changing agriculture, changing health care, changing urban environments. That’s what we’re here to celebrate: these 100 people that will change the world and set a gold standard.”

Now in its eighth year, delta v has supported 125 startups, many of which are still in operation. By pushing startup teams to learn from their target customers and build companies around those insights, the program aims to equip participants with entrepreneurial skills they can use throughout their careers. Indeed, even as it forces students out of the classroom, at its core delta v is an educational program.

“Delta v is a teaching apparatus around entrepreneurship, so that’s embedded in the scheduled activities every week,” says Rachel Basch, director of content for Abound Parenting, a startup with an app for parents to improve their children’s reading levels. “I don’t have a business background, so this has been really educational.”

Abound has already begun a pilot trial with more than 100 parents and is expecting a wider public launch later this month.

Karina Akib, co-founder of CaroCare, which provides in-home and virtual care to new families in the eight weeks postpartum, said the mock boards that delta v assigns to each startup helped her founding team test its ideas and prioritize each step toward building a customer base.

“Every month our board was super critical on what we needed to do next, what traction they wanted to see, and because our board was made up of people from the health care space and venture capital space — people who had done this before — they really pushed us to get more traction every month. They also forced us to focus. You needed to prove there was action and you could only do that by focusing on one thing.”

The guidance helped CaroCare launch a paid pilot in June. The company has delivered more than 50 hours of care to date and is hoping to expand in the coming months.

This was the third year the program included a group of startups from New York City, hosted by the venture capital firm Two Sigma Ventures. Seven teams worked from New York, creating an intimate environment that gave the entrepreneurs a close look at their peer startups.

“[The New York cohort] was super small, so we got to know each other really well,” says Andrey Biryuchinskiy, the co-founder of the online community for blue-collar workers called Hardworkers. “It was cool because a lot of the startups in NYC have already raised money, so it was amazing to learn from them and see different stages of startup life.”

Biryuchinskiy and his co-founder Vlad Shraybman have already conducted more than 100 interviews for market research, and Biryuchinskiy says the Hardworkers platform is adding more than 300 new members every month.

“A blessing to mankind”

This year’s event also featured a talk by Massachusetts Governor Charlie Baker. Baker applauded the entrepreneurs and audience members for their passion and enthusiasm, and pointed out the great resources Massachusetts has to offer new companies, urging entrepreneurs to keep their businesses in the commonwealth.

“I’d be nuts if I stood in front of this audience and did not say that at some point!” Baker said to laughter.

In a more serious tone, Baker, who has attended several MIT events since becoming governor in 2015, emphasized the important role the Institute plays in translating innovation into impactful companies.

Overall, the event let participants celebrate the progress they’ve made so far and provided an example for other students considering embarking on their own entrepreneurial journeys. This year’s Demo Day kicked off MIT’s annual festival of entrepreneurship and innovation, t=0, which features entrepreneurial events for students across campus all week.

Aulet encouraged the students in the audience to believe in themselves and take the plunge into MIT’s entrepreneurial ecosystem.

“Tonight is not just about the people presenting,” Aulet said. “It’s about you students. Because you have to be motivated and believe that you can be up on this stage. Because these people were in the audience one year ago.”