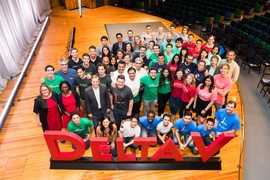 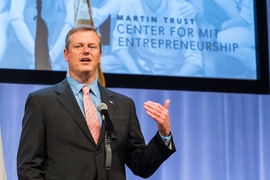 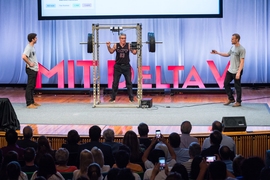 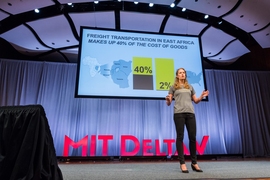 Earning early customers and funding, and building a product, can be difficult for fledgling startups. But the startups that participated in this year’s MIT delta V summer accelerator proved at last Friday’s Demo Day that they’ve already achieved those milestones and more.

Demo Day is the capstone event for the 12-week MIT delta V startup accelerator (formerly the Global Founders’ Skills Accelerator), where entrepreneurs pitch their business ideas to the MIT community, investors, and business leaders. MIT delta V, hosted in the Martin Trust Center for MIT Entrepreneurship, provides the startups with funding, mentorship, office space, and other resources from June through August.

This year, 13 startups from MIT and one from Mexico pitched their innovative business plans to a capacity crowd gathered in Kresge Auditorium, which included guest speaker Massachusetts Gov. Charlie Baker.

While opening Demo Day, Martin Trust Center Managing Director Bill Aulet called the event “the greatest day of entrepreneurship at MIT. Every year, it raises the bar of what MIT can do.”

Launched in 2012, MIT’s summer accelerator has helped launch 44 startups, 30 of which are now thriving companies, including LiquiGlide, Nima, Accion Systems, and Infinite Analytics. Combined, these companies have raised tens of millions of dollars and created hundreds of jobs.

This year, the accelerator was renamed MIT delta V after the mathematical symbol for a change in velocity, caused by acceleration. Or, as Aulet put it, “the derivative of velocity is an accelerator.” MIT delta V, Aulet said, takes startups through the final stretch to “escape velocity,” where they’re ready to enter the market.

In his talk, Baker discussed the burgeoning innovation economy in the Commonwealth of Massachusetts, before taking a seat in the crowd to catch some of the action. Baker noted MIT’s recent partnership with the state on the Advanced Functional Fabrics of America (AFFOA) Institute, as well as the rising industries of medical technology, life sciences, pharmaceuticals, and digital health. “There is so much intellectual capital … right here in Massachusetts,” he said.

Startups will present at two additional Demo Days, held in New York City on Sept. 15 and in San Francisco on Sept. 22. Demo Day was a kickoff event for MIT’s entrepreneurship festival, called t=0, which hosts a variety of events on campus until Sept. 16.

At the event, startups demonstrated signs of strong progress. For example, mental-health platform Lean on Me, founded by MIT undergraduates, has established a solid user base. The platform uses an algorithm to match anonymous users with volunteer peer supporters, who chat privately with the users about issues via text message. After piloting the platform at MIT in February, the startup now has 18 volunteer supporters, more than 150 users, and has fielded more than 2,500 text messages.

In October, Lean on Me is bringing its platform to the University of Chicago, “with 36 new supporters, expanding access for thousands more college students,” co-founder Charlie Andrews, a senior studying mathematics and computer science, said in his pitch.

Other startups demonstrated equally impressive numbers, all within one month of opening operations: dot Learn, which developed a platform to compress online video courses so they’re cheaper for African users who pay high prices for bandwidth, has enrolled 500 students in one of its courses. Kumwe Logistics, which gives African truck owners smartphones to offer their services to shippers online, has now shipped 400,000 pounds of goods and has an upcoming contract for double that number. Fleteya, a team from Mexico developing an online platform that connects empty shipping trucks on the road with nearby shippers, so trucks never travel empty, now has 200 active carriers.

To use the device, which is about the size of a small shoebox, a patient places a finger inside a small hole. Imaging technology inside captures the capillaries in the skin just above the nail. Because these capillaries are so small, white blood cells squeeze through one by one. On video, a white blood cell appears as a white gap in a black stream of red blood cells. Custom algorithms count those gaps, and a number appears on a small screen that’s equivalent to the white blood cell count.

Chemotherapy patients, who need to keep track of their immune systems for treatments, are a likely group of users for the device, which has potential to become a consumer diagnostic tool.

For many students, such as Kalinowska, MIT delta V was the first hands-on experience with building a startup. She met with customers, built a business plan, and organized clinical trials. But the best advantage of the accelerator? The network, she said. “If we wanted an expert from a field, or a professor from another field, or a person from industry, we’d reach out to the alumni network of [Sloan] and … we’d get to the person we needed,” Kalinowska said. “I think that’s extremely valuable and something that would have been hard to get without MIT or the accelerator.”

For mechanical engineering graduate student Jacob Rothman, who co-founded Perch, which is developing a video-tracking system for weight lifters, MIT delta V was an “immersive” first step in entrepreneurship.

The Perch system consists of 3-D cameras attached to weight racks that monitor the lifter’s joints and the weights to provide information on reps, sets, velocity, and form. If the bar is slanted while squatting (where the bar must be horizontal across a lifter’s shoulders), for instance, the system will alert the lifter. Building the system took a lot of trial and error, so it was good to be in MIT delta V, Rothman told MIT News. “It was a very safe environment to … immerse myself in entrepreneurship,” he said. “There’s a lot of mentors, a lot of advisors, and they provided us with funding. They gave us the resources to experience it, and fail, and try again.”

Currently, Perch has a working prototype in an MIT weight room and this fall will bring the system to weight rooms at Boston University, Harvard University, and the University of Massachusetts at Lowell.