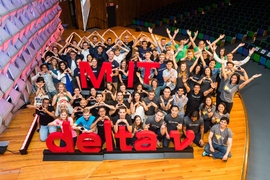 ↓ Download Image
Caption: Every summer, the MIT delta v accelerator provides a cohort of student startups with the wherewithal to launch, including office and lab space, mentorship, and funding. At the 2017 Demo Day event on Sept. 9, the entrepreneurs pitched their business ideas to the MIT community, investors, and business leaders. 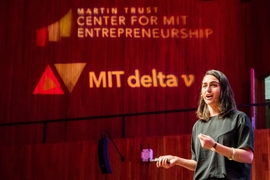 ↓ Download Image
Caption: The event’s keynote speaker was delta v alumna Shireen Yates, co-founder of Nima, which is developing a portable gluten detector. “The delta v accelerator helped catapult us in the most efficient way to where we are now,” she said. 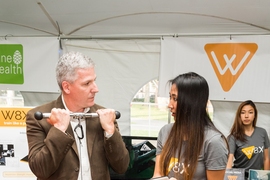 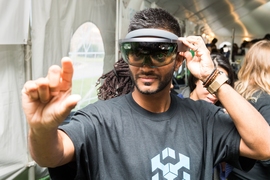 ↓ Download Image
Caption: One of the members of Waypoint demonstrates the startup’s augmented-reality glasses, which are used for recording and sharing expert knowledge from and for frontline workers in hospitals and other care facilities.

Caption:
Every summer, the MIT delta v accelerator provides a cohort of student startups with the wherewithal to launch, including office and lab space, mentorship, and funding. At the 2017 Demo Day event on Sept. 9, the entrepreneurs pitched their business ideas to the MIT community, investors, and business leaders.
Credits:
Photo: Justin Knight

Caption:
The event’s keynote speaker was delta v alumna Shireen Yates, co-founder of Nima, which is developing a portable gluten detector. “The delta v accelerator helped catapult us in the most efficient way to where we are now,” she said.

Caption:
One of the members of Waypoint demonstrates the startup’s augmented-reality glasses, which are used for recording and sharing expert knowledge from and for frontline workers in hospitals and other care facilities.
Photo: Justin Knight

The startups that presented at the MIT delta v accelerator’s Demo Day this weekend proved ideas can get off the ground quickly if given the right resources. The early-stage startups all demonstrated innovative products and services that have already attracted customers, gone through pilot testing, or reached another commercial milestone.

From June to August each year, MIT delta v, hosted in the Martin Trust Center for MIT Entrepreneurship, provides a cohort of startups with the wherewithal to launch: office and lab space for prototyping, mentorship from veteran entrepreneurs, $20,000 in funding, and $2,000 in living expenses.

Demo Day is delta v’s capstone event, where the entrepreneurs pitch their business ideas to the MIT community, investors, and business leaders. Of the 21 startups (the biggest cohort yet) that enrolled this summer, 19 startups pitched their innovative business plans to a capacity crowd gathered in Kresge Auditorium.

The diverse range of ideas included robots that analyze sewerage to track opioid consumption in populations, portable weight-lifting equipment that adjusts resistance in real time, a “Netflix” service for autonomous-vehicle data, augmented reality for recording and sharing knowledge of frontline workers in hospitals and care facilities, an online market that helps indigenous people digitize and sell their art, a battery for soldiers that recharges with fuel, cooking classes that donate meals to the needy, and advanced filtration systems that better remove heavy metals from drinking water.

During their presentations, all the startups mentioned some recent commercial milestones, drawing enthusiastic cheers from the crowd. These milestones include partnerships and agreements with big-name companies, pilot programs, working prototypes or early product iterations, launched websites or apps, earned revenue, and — perhaps most importantly — customers.

Indeed, Bill Aulet, managing director of the Martin Trust Center, said the accelerator’s focus this year was on “customer traction.”

“The concept is great, but did the customer buy it?” Aulet said in his opening remarks. “Today you’re going to see this is not just a project for these [startups] anymore. They have validated that … their customers will pay for it. That is the single necessary and sufficient condition for a business: to have a paying customer.”

This year also saw the launch of a pilot program, the MIT NYC Summer Startup Studio, in New York City, where seven additional startups were offered the same perks that delta v provides. These startups will present at two additional Demo Days, in New York City on Sept. 14 and in Silicon Valley on Sept. 25. Demo Day was a kickoff event for MIT’s entrepreneurship festival, called t=0, which hosts a variety of events on campus Sept. 9-15.

Launched in 2012, MIT’s summer accelerator has helped launch 44 startups, 30 of which are now thriving companies, including LiquiGlide, Wecyclers, Accion Systems, EverVest, and Infinite Analytics. Combined, these companies have raised tens of millions of dollars and created hundreds of jobs.

Among this year’s thriving startups was Octant, which is building machine-learning algorithms that curate scores of data for autonomous vehicles. Octant sends drivers to cruise around cities and collect data, through onboard cameras and sensors, of hundreds of thousands of driving scenarios. Companies can go through Octant to find specific scenarios that help train their autonomous vehicles.

In that way, Octant is like a “Netflix” for autonomous vehicles, co-founder Ryan Pijai, a graduate student in the Sloan School of Management, told MIT News. “Instead of watching videos, engineers subscribe to scenarios and we provide video clips and sensor data on those scenarios,” he said. “It’s almost like the car is the person and is learning while it’s watching the data.”

Octant launched just a few months ago. While participating in delta v, the startup refined its software, contracted more than 100 drivers, deployed cars, partnered with a Fortune 50 company, and earned more than $100,000 in revenue from customers.

That’s just one example. Roots Studio, which digitizes and markets culturally iconic artwork of indigenous people who struggle to find customers in the isolated areas where they live, signed 1,200 artists in India, Indonesia, and Panama, and generated $50,000 in revenue.

Early in the summer, Infinite Cooling, which captures vapor from water used at power plants and reintroduces it into the cooling cycle, just launched its first industrial-scale pilot at the MIT cogeneration plant, a natural gas turbine. The startup has also earned $300,000 for ongoing pilot testing.

Biobot Analytics, a startup that’s gained extensive media attention recently, is building robots that dip into sewerage to collect samples that are analyzed in the lab to look for viruses, chemicals, and bacteria. The data appear on a dashboard so the startup can track and visualize concentration levels and efficacy of treatments. Currently, the startup is tackling a drug crisis in Massachusetts and across the nation.

“We’re setting off to measure the concentration of various opioids in sewerage, so we can proactively estimate consumption at the neighborhood level,” said co-founder Newsha Ghaeli, an MIT research fellow. “We’re moving from this reactive way of counting how many people die, to proactively measuring consumption while people are still alive.”

The startup has now secured a 12-week pilot program with a Northeastern city, deployed a prototype in Cambridge, and has five other partner cities lined up.

The event’s keynote speaker was delta v alumna Shireen Yates, co-founder of Nima, which is developing a portable gluten detector. In 2013, Yates and her co-founder enrolled in delta v (then called Global Founders’ Skills Accelerator) “and the next three months really changed the trajectory of both our lives for the next four years,” she said. “The delta v accelerator helped catapult us in the most efficient way to where we are now.”

In the accelerator, the startup quickly built prototypes, took those to tech conferences, conducted market research, and even made a makeshift restaurant in the Martin Trust Center to gather customer feedback. “This was all done … to say, ‘Is this an idea I want to commit my life to?’ Delta v helped us answer that question,” she said, adding, “Since then, we’ve been going nonstop.”

That sentiment was echoed by this year’s cohort. For Octant, a major perk of delta v was having a mock board of directors — small groups of industry veterans — that offered advice to all the startups. “The program pushes you to test everything you’re doing,” Pijai said. “We’re put into a lot of scenarios in a short period of time [to simulate] what it’s like to fully run a startup.”

For hardware startups such as W8X, rapid iteration was key to their progress. The startup is developing portable weight-training equipment that adjusts resistance in real-time. Their first product is a mat with a curling bar tethered to a middle compartment with an electric motor. Through an app, the motor can be preset to change resistance during different stages of reps, such as when lifting versus lowering the bar, which optimizes training.

Co-founder Jody Fu ’17 and two others launched W8X (pronounced “weight X”) in January and, through delta v, went through many product iterations. Now the W8X has a working prototype and interested customers, which has instilled the team with a new level of confidence, Fu told MIT News.

“We built six prototypes, we have six interns, and we talked to 40 strength coaches in the nation. We’ve really narrowed down what our product is, and now were confident we have something that’s desirable and what coaches are craving to have in their gyms,” Fu said. “It was really rapid fire this summer.”

Is your meal really gluten free?