Design that makes a difference 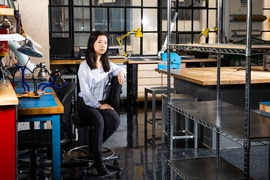 ↓ Download Image
Caption: Fusing art, science, and product design, senior Jierui Fang has followed — and sometimes created — her own path at MIT. “I like the idea of having a job that involves design for people who are not traditionally served by design,” she says.
Credits: Photo: Jake Belcher 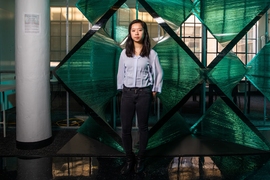 ↓ Download Image
Caption: Fusing art, science, and product design, senior Jierui Fang has followed — and sometimes created — her own path at MIT. “I like the idea of having a job that involves design for people who are not traditionally served by design,” she says.
Credits: Photo: Jake Belcher

Caption:
Fusing art, science, and product design, senior Jierui Fang has followed — and sometimes created — her own path at MIT. “I like the idea of having a job that involves design for people who are not traditionally served by design,” she says.
Credits:
Photo: Jake Belcher

Her first year on campus, Jierui Fang received an intriguing message from a junior living on her dorm floor who was looking for help on a project to paint augmented reality murals in the tunnels below MIT. “I wavered on applying for about a month, not wanting to overload my already frazzled first-year self,” Fang recalls. “While riding the bus the day of the deadline, however, I decided I had nothing to lose and hurriedly sketched out my thoughts with hours left, not knowing how much an impact this project would have on my undergraduate life.”

Fang became a design chair and later lead for the Borderline Mural Project, finding and contributing to an arts community at MIT that she had feared at first might not exist. Since then, the art and design major in the Department of Architecture has worked on a unique cross-section of physical and digital design projects on and off campus. She has sought inspiration from a variety of sources, collaborating with people she has met through the Undergraduate Research Opportunities Program (UROP),  workshops and lectures, and a number of student groups and communities.

Fang had been considering an art degree at other schools before choosing MIT, a decision made, in part, after a friend pointed her toward a TED talk by Neri Oxman, associate professor at the MIT Media Lab. “I felt like the work she was doing was very cool and multidisciplinary, kind of fusing together art and design and science — all things I’d been interested in at the time,” she says. “It showed me that students could pursue more than one thing at MIT.”

Once on campus, Fang searched for a way to feed her diverse interests in the visual arts, health care, public policy, and biology. After initially declaring a bioengineering major, she says, “I discovered I liked design more, and realized I was actively searching for design-related communities, opportunities, and news.”

Fang says her first design studio, 4.031 (Objects and Interactions), was influential in introducing her to design’s tools and technologies as well as topics in generative and interaction design. An externship at AE Superlab and participating in the “Make it Playful” hackathon in Grenoble, France, during Independent Activities Period also helped her make the decision to switch to the new design major, created in 2018, and to make bioengineering her minor.

The class 4.110 (Design Across Scales and Disciplines) with Oxman herself “had opened my mind to what design could do,” says Fang, who has taken this lesson to heart. Her portfolio includes design for devices such as a vehicle siren detector for the hearing-impaired and a field kit for diagnostics and pharmaceutical manufacture that medical workers can use in remote locations. The last design, which Fang worked on through a UROP project in the Little Devices Lab, was included on display in the “Design with the 90%” traveling exhibit curated by the Cooper Hewitt Smithsonian Design Museum.

The Little Devices projects have been among her favorites, Fang says. “Most of the researchers in that lab are undergraduates, so I really feel like I was able to contribute a lot to the projects there. … The way the lab was set up there, I could talk to people and collaborate and also see my work in museums or being shipped off to places for other people to use, which was super gratifying.”

MIT International Science and Technology Initiatives (MISTI) also has provided funding for several of her projects, including the hackathon in France and a trip to Brazil with the Borderline project.

Fang also enjoyed the digital design she did in the summer of 2019 for the U.S. Citizenship and Immigration Service’s (USCIS) Refugee, Asylum, and International Operations Directorate, where she worked with a team to create a new centralized refugee case-management system. “I met a lot of refugee officers there, and it was really interesting hearing their stories,” she says. “It was a very unique experience, with the whole current climate around refugees.”

“I like the idea of having a job that involves design for people who are not traditionally served by design,” Fang adds.

The experience prompted her to spend this January working at two high schools in Amman, Jordan, through MIT’s Global Teaching Labs. She and three other women created their own curriculum in introductory product design and computer science. Fang had wanted to know more about what teaching was like, but she was also curious about the region after her time at USCIS. “In Jordan, a large part of their population is refugees,” including Palestinians and Syrians, she says. “I felt like being closer to the ground helped me understand” the educational and cultural challenges refugees face in their new countries.

Fang is looking for a product design job in industry after she graduates, hoping to learn more about that sector after working in nonprofit, government, and academic settings. She says she enjoys the “tangibility” of physical product design, but adds, “I think in terms of scaling, digital can reach a lot more people and can have a lot more impact that way. It’s been pretty rewarding knowing you’re reaching so many more people through digital products.”

Her ideas about design have changed over her time at MIT, and she wishes more people on campus understood how many types of skills are involved in a design career. “I think a lot of people have this perception that design is all about aesthetics, so that sometimes when I join a club or offer to help out with something, they’re like, ‘make this poster prettier,’” Fang says, laughing.

Among many other clubs on campus, Fang has been part of the Asian Dance Team and the MIT Figure Skating Club, continuing interests that she has had since elementary school. Last semester she took a class at nearby Harvard University on fungi, and is taking another one this semester on ornithology.

And why is a designer learning about bird evolution? “Why not?” Fang says.

“There’s so much you can take advantage of here, and I don’t think an excuse should be, ‘oh, I’ve never done this before’ or ‘I’m afraid of being a beginner at something,’” she says. “I would say that I'm willing to take a chance on things that might not originally seem like they would fit into a master plan for my future.”

Now at home, Fang is adjusting to remote learning and staying connected with friends from MIT. “I'm wrapping up some loose ends for the competitions from the MIT Global Startup Workshop that was supposed to be held in France this week,” she says. “I've also been learning some skills I've always wanted to but have been too busy to learn, trying to figure out how I can be useful in all of this, and how designing will have to adapt in this new environment.”

Student challenges kick off celebration of MIT Stephen A. Schwarzman College of Computing

A closer look at the diabetes disaster