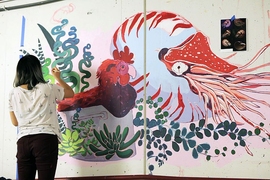 Caption:
Rising junior Jessie Wang, the AR Coordinator for The Borderline Mural Project, paints a section of the wall.

As you travel through the tunnels beneath MIT, you may spot a few common sights: doors to mysteriously named labs, stray office chairs, lots of students, and some tourists. But these days, there’s something new to discover in the tunnels — 200 feet of student-created art. “Walking through the tunnels I thought, ‘This is basically just a blank canvas,’” says Julia Rue, rising senior and lead on The Borderline mural, a new collaborative art project in the tunnel underneath Ames Street.

The Borderline mural was unveiled in May, but the idea for it came just months before, prompted by the first meeting of 21M.601 (Drawing for Designers). “Our professor asked everyone why they took the course,” Rue explains. “And I was surprised by how many people said they used to do a lot of art in high school but stopped when they got to MIT.”

This gave Rue the idea for a large art project that could involve students across MIT. First, she received a grant from the Council for the Arts at MIT. Next, she turned to the MIT community to develop the idea further, holding a meeting open to all undergraduates. “I shared the idea and invited anyone who wanted to be a part of it to help — 80 people signed up that day,” she says.

Of the 80 volunteers, 40 were selected to contribute their art to the walls, while others signed on to assist in painting, a role that was essential to completing the mural in a matter of weeks. Tara Lee ’17, who worked on the project during her final semester at MIT, contributed her art. “I thought it would be a really good way to end my time at MIT — on a creative note,” she explains.

There was no set theme for the mural contributions because Rue wanted artists to have ownership over their creations. This resulted in a mural that is a mix of flowers, faces, and typographic art. Artist Iris Fung ’17 decided that her portion of the mural would reflect her studies at MIT. Her work displays the phrase, “You are Human,” in a variety of patterns and textures related to plant and human life. (Look for cilia and mushrooms in the piece.) “I’m a biology major, so this reflects me,” she says.

Though each contribution to the mural may be representative of the individual artist, Fung says there was at least one common theme. “A lot of people said, ‘Oh, I want my piece to be relaxing and soothing,” she says. “So that points to what’s going on in people’s minds from day to day.”

While the project allowed MIT students to tap into their artistic side, it’s not without its technological merits. Six of the paintings in the mural have an augmented reality (AR) component developed by rising junior Jessie Wang and rising sophomore Avery Lamp. Users can download an app to see animations — created by a team of 10 students — while viewing specific art pieces. “We wanted everyone to feel involved in the project, so with the app you can discover little things and people can feel like they are a part of the making of the mural themselves,” Rue says.

The mural is slated to stay on the walls of the tunnel until December 2017; beyond that, the future is uncertain. The Borderline team got special permission to paint the walls, but that permission expires at the end of the year. Rue hopes that the project will not only stick around, but transform in the future. “We’ve gotten a lot of support from many people. We know that we do want to continue and expand it — how, we haven’t decided on just yet,” she says.

The Borderline team welcomes input on the mural.

Boston Globe reporter Steve Annear spotlights how MIT students have transformed the walls of a pedestrian tunnel that runs underneath Ames Street into a giant work of art. Annear notes that, “in true MIT fashion, they rolled out an app that makes some of the work come to life when it’s viewed through a smartphone screen.”