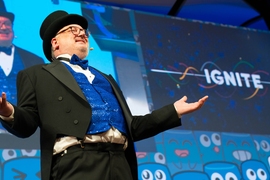 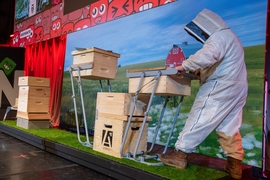 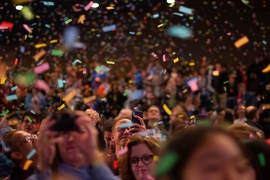 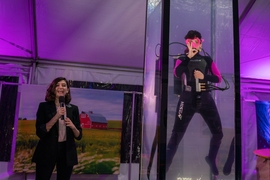 ↓ Download Image
Caption: In a water tank set up outside Kresge Auditorium, a scuba diver shows off Rho, a buoyancy control device that can help a diver smoothly float up and down while staying naturally buoyant.
Credits: Image courtesy of the 2.009 photography staff 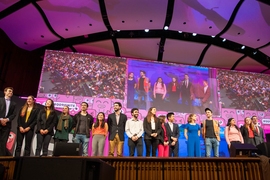 ↓ Download Image
Caption: Members of each of the eight student teams take the stage for a final ovation.
Credits: Image courtesy of the 2.009 photography staff

Caption:
In a water tank set up outside Kresge Auditorium, a scuba diver shows off Rho, a buoyancy control device that can help a diver smoothly float up and down while staying naturally buoyant.
Credits:
Image courtesy of the 2.009 photography staff

Caption:
Members of each of the eight student teams take the stage for a final ovation.
Credits:
Image courtesy of the 2.009 photography staff

On Monday night, MIT’s Kresge Auditorium might as well have been a rock arena, for all the foot-stomping, pom-pom-waving zeal of the raucous, capacity crowd. And though a house band kept up a rollicking, tongue-and-cheek soundtrack custom-tailored to the night’s events, it wasn’t the tunes that packed the house; it was technology.

More than 1,100 students, faculty, and product designers attended one of MIT’s most anticipated annual events to cheer on the 139 students of MIT’s Product Engineering Processes class, known simply by its course number, 2.009. Each year, 2.009 students form teams of about 15 to 20 members and work together throughout the semester, thinking up, building, and testing a new product, and coming up with a business plan. They then pitch and demo the product at the end of the course in final presentations that are staged — more elaborately with each year — in MIT’s largest theater space.

This year, teams were each given $7,000 and tasked with developing a product inspired by the theme “Ignite!” — a concept which was chosen as a “call to make something happen — to do something new.” Course instructor David Wallace, professor of mechanical engineering and master of ceremonies for the night’s events, described the students’ journey through the semester as growing “from an itty-bitty spark to a huge flame.”

As a playful nod to this year’s theme, the audience was treated to temptingly ignitable confections: marshmallows, which appeared in various forms, from a custom-printed take-home treat to life-sized, marshmallow-costumed dancers.

Marshmallows also made animated appearances, for example in videos interspersed between group presentations, produced to give the audience a peek into the students’ product design experience. There was also an arcade game, designed especially for this year’s theme, which pitted marshmallow players against each other in a quest to clear away enemy munchkins while navigating around graham cracker islands. The game was made available on the course’s website ahead of the event.

As a warm-up to the night’s main attractions, the video game was wheeled onstage, and players attempted to outmaneuver their confectionary opponents. Among the eager gamers were the top two online scorers, as well as mechanical engineering department head Evelyn Wang. A musical fanfare announced the start of the night’s final presentations with a portentous rendition on MIT’s pipe organ of Edvard Grieg’s “In the Hall of the Mountain King,” followed by the house band with a new take on the opening lyrics to Lil Nas X’s “Old Town Road”: I’m gonna take myself down to Pappalardo, where I’ll build til I can’t build no more.

The bags and the bees

Each of the eight teams were given seven minutes to pitch and demonstrate their product. Audience members were then given four minutes to ask follow-up questions, which they could do by first catching then speaking into a plush, marshmallow-shaped ball embedded with a wireless microphone.

While the night was infused with fun, many of the students’ products were designed to be of serious, much-needed assistance. Three teams, for instance, developed ergonomic inventions to help prevent back injury in different situations.

Students as part of 2.009’s Blue team pitched a product they coined Uplift — a portable ramp for airplane baggage handlers, that can be opened and angled up to a plane’s cargo area. Instead of lifting suitcases by hand into the cargo hold, handlers can roll baggage up the ramp’s aluminum rollers — an adaptation that the students claim could prevent 47 percent of the back injuries typically experienced by baggage handlers. Workers can then fold the 50-pound ramp back up via a lifting-bar mechanism similar to a lounge recliner. The team tested the prototype with baggage handlers at Boston’s Logan Airport, who gave it a positive reception overall.

The Silver team also developed a back-saving product in the form of Rise — an easy-access mechanical oven rack that automatically pulls out and lifts up with the press of a button. The rack can also lower itself back down into the oven, to one of three different positions. It’s designed with a motor and gearbox, which drives a tensioned cable system linked to a stainless steel rack that can withstand temperatures up to 600 degrees Fahrenheit. The students say the automated oven rack, which doesn’t require one to bend forward to lift out a roasting pan, will “redefine inclusivity in the kitchen.”

The Red team, with their product Aris, aimed to prevent back injuries in a seemingly unlikely field: beekeeping. In their research, the students learned that beekeepers raise bees in stacks of boxes, on top of which are more boxes that contain the honey produced by the bees. A beekeeper must lift each 60-pound box out to collect honey and check on the bees — back-breaking work, as third-generation beekeeper and MechE staffer Tony Pulsone told the audience. Clad head to toe in beekeeping gear, he demonstrated the team’s product — a rail-and-base support system that attaches to and lifts out individual boxes in response to a light pull. “This will allow us to keep bees injury-free for years to come,” says Pulsone, who teaches a beekeeping course at MIT during Independent Activities Period.

Several 2.009 teams designed products to enhance experiences for adventure seekers. Students of the Green team developed Areta, a “lead climbing autobelay” device composed of a pulley and damping system that both supports a climber during their ascent and provides speed-controlled friction to slow the climber’s descent if they start to fall. The device can be mounted to an indoor climbing wall and used in place of a belayer — a person who typically supports a climber from the ground. The team invited a local competitive rock climber to demonstrate the product by climbing a rock wall erected at one end of the stage. When, at the top of the wall, the climber suddenly let go, the device quickly activated to slow the climber’s fall, demonstrating in dramatic fashion the team’s slogan: “Areta: We will always let you down.”

The Yellow team sought to streamline surfing gear with Carve, a modular surfboard that can be configured into three different surfboards to suit the wave conditions at any given moment. The modular board is made of a nose and tail piece, as well as two middle pieces, one shorter than the other, and which can be fitted together or separately between the nose and tail via a tongue-and-groove connection to make either a 6.5-, 7.5-, or 8.5-foot board. The students estimate that rather than spending $1,500 on three separate boards, a surfer can buy a three-in-one Carve board for $1,200, saving both money and space.

Students in the Pink team made a splash with a live demonstration of Rho, a buoyancy-control device for scuba divers. Traditional buoyancy-control devices, or BCDs, look a bit like inflatable backpacks, which divers can inflate to float up, or compress to sink down. But BCDs can cause rapid, uncontrollable ascents and descents. Rho, in contrast, consists of two fixed-volume cylinders attached to a diver’s main air tank. Each cylinder contains an air bladder that can inflate or deflate to maintain a diver’s natural buoyancy. The students set up a water tank outside Kresge, where a scuba diver wearing Rho used a handheld device to float up and down in the tank.

This year’s 2.009 theme also sparked an idea for cosmetic customization for students of the Orange team. Their product, Calipso, is a sleek, brushed-aluminum device that could be mistaken for a small Keurig machine, but is in fact designed to mix and melt “pearls” of pigment into a slim, tube-shaped mold to create personalized shades of lipstick. The students say a customer can record the ratio of pigments in a particular shade, in case they want to have it made again. The team plans to pitch the product, estimated to cost around $20,000 per unit, to major beauty brands and cosmetics stores.

And for something that could be especially handy in the coming wintery months, the Purple team demonstrated Triton, an app-enabled system that responds to weather conditions as they develop and automatically circulates water in small amounts through a home’s plumbing system to prevent burst and frozen pipes. The physical system comprises a centrifugal pump that attaches to a home’s heating system, as well as a bridge that mounts to locations in the plumbing system to move small amounts of water through the pipes. The system is guaranteed to prevent pipes from freezing, down to -40 degrees Fahrenheit, the students said, and its activity can be monitored and controlled via an app.

As each group finished their presentations, the students were clearly relieved, having accomplished the last, highest hurdle in an intense, months-long pursuit. And as one student noted, the end was bittersweet, as many students would leave the class “with eternal friendships and memories.”

As a special thanks to course instructor Wallace for igniting their drive for design and engineering, the students presented him with a gift “that will ignite anything”: a 2.009-decorated flamethrower. To roaring chants of “Use it!” Wallace promised that he would light it up — outside. In his parting remarks, he reflected on MIT as a “special place,” and one that may remain so, “if we find joy in taking on difficult challenges.”

Student teams design in the face of danger