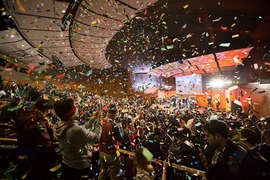 ↓ Download Image
Caption: More than 1,000 people packed MIT’s Kresge Auditorium for the 2.009 final product presentations, a major fall-semester event known not only for innovative products presented by students, but also for non-stop fun, music, and confetti. 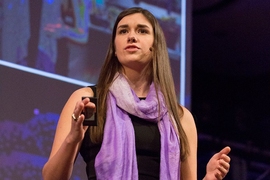 ↓ Download Image
Caption: Throughout the event, each student team was given seven minutes to pitch and demonstrate their product. 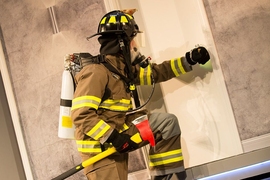 ↓ Download Image
Caption: The silver team demonstrated a wearable thermal danger detection device, called FireSense, which is designed to help firefighters determine whether opening a door is safe during a fire.

Caption:
More than 1,000 people packed MIT’s Kresge Auditorium for the 2.009 final product presentations, a major fall-semester event known not only for innovative products presented by students, but also for non-stop fun, music, and confetti.

Caption:
Throughout the event, each student team was given seven minutes to pitch and demonstrate their product. Pictured here, Amelia Bryan from the purple team.

Caption:
The silver team demonstrated a wearable thermal danger detection device, called FireSense, which is designed to help firefighters determine whether opening a door is safe during a fire.

Even superheroes need products to enhance their powers. Thor has a hammer. Wonder Woman has the lasso of truth. Batman has his suit. On Monday evening, teams of mechanical engineering students unveiled new products with their own power-extending capabilities.

These students of 2.009 (Product Engineering Processes), have spent the semester developing and designing a product prototype centered around this year’s theme: “Super!” Products ranged from the fun (a game blind and sighted people can play together) to the life-saving (a real-time system for search and rescue teams) to the life-changing (a wearable device that minimizes the effects of tremors in Parkinson’s patients).

Months of ideating, modeling, and testing culminated in this week’s final presentation. Eight teams of students presented to a full capacity crowd in MIT’s Kresge Auditorium. They received a rock-star welcome. Brandishing pompoms in every color of the rainbow, the crowd of 1,200 cheered as 140 students revealed their prototypes.

The 2.009 final presentation has become a seminal event each year at MIT. For the past 22 years, professor of mechanical engineering David Wallace has been at the helm of the class, which serves as a capstone for seniors. He leads a triple-digit team of dedicated teaching assistants, course instructors, and support staff to ensure students leave this class with an understanding of how products are created and launched.

He also makes sure students have a lot of fun along the way. That was abundantly clear during Monday’s event, which kicked off with an organ performance of “Despacito” and featured a live band, lots of confetti, and of course, a top-hat-wearing Professor Wallace.

Throughout the event, each team of students had seven minutes to pitch and demonstrate its product. Teams walked through each product’s unique features as well as their proposed business models. At the conclusion of every presentation, students answered questions from the audience in Kresge Auditorium and on social media.

The live demonstrations provided each team an opportunity to demonstrate the “superpowers” their product could give its users. The silver team demonstrated the silver team’s wearable thermal danger detection device, FireSense. The yellow team simulated a search and rescue team’s efforts on MIT’s campus, providing a live demonstration of their product, Coordinate. Students from the green team invited MIT Office of Government  Community Relations Co-Director Paul Parravano, who is blind, to play their game platform Tatchi, which allows users to play games that are not visually dependent.

One presentation that deeply moved the audience was Animo, a wearable device that helps manage tremors in people living with Parkinson’s Disease. The purple team enlisted the help of local business owner Michael Wackell. In a live demonstration on stage, Wackell traced a spiral shape with a marker, first without wearing the device around his wrist, then again while wearing Animo. His tremors made tracing the spiral incredibly difficult. But when he put the vibrating device on, he was able to neatly trace the spiral. When asked by his own daughter, who was in the audience, how he felt when used Animo the first time, Wackell responded, “I felt like I was myself again, like how I felt before my diagnosis.”

The products designed by this year’s students can help a diverse range of people — from professional musicians to bricklayers and people with hearing loss — unlock their inner super powers. A brief summary of each product presented at the 2.009 final presentation follows:

Silver Team: FireSense
FireSense is a wearable, thermal danger detection device designed to help firefighters determine whether opening a door is safe during a fire. It lights up in green, yellow, or red to indicate the likelihood of thermal danger behind the door. FireSense also vibrates when it detects dangerous conditions to provide redundant nonvisual feedback.

Red Team: Blink
Blink is an assistive eyewear system that empowers people with advanced neurodegenerative diseases to control their homes simply by blinking. The wearer blinks to select options from a custom cascading auditory menu. These commands are relayed from the Blink app to a smart home assistant, such as Google Home or Amazon Alexa, to trigger any smart device.

Green Team: Tatchi
Tatchi is a strategy game platform that relies not on vision but a combination of memory, hearing, and sense of touch. It allows users to play games that are not visually dependent and helps promote social interaction between blind and sighted players.

Pink Team: Volti
Volti is a hands-free music page-turner that allows musicians to play without interruption. The turner does not require special preloading or setup of the pages, and is an elegant art piece in its own right.

Blue Team: Robin
Robin is a discreet wearable device that provides real-time feedback to help those who are hard of hearing adjust their speaking volume. It uses two discreet vibration patterns to notify the user if he or she is speaking either too loudly or too softly.

Yellow Team: Coordinate
Coordinate is a three-device system that provides real-time feedback for search-and-rescue teams, optimizing a lifesaving operation. The three devices — a search module, lead module, and command module — are designed for three distinct roles within a search-and-rescue mission.

Orange Team: Rhino
Rhino is a masonry tool that features an impact hammer attachment and allows masons to remove mortar for repointing, quickly, accurately, and safely. The product substantially reduces the amount of harmful silica dust generated during the brick-removal process.