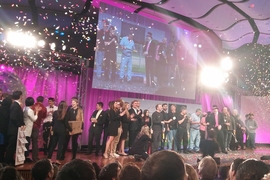 ↓ Download Image
Caption: Now in its 21st year, the “product engineering processes” class led by David Wallace is designed to give its students a strong sense of what’s involved in taking a product all the way from brainstorming ideas, through preliminary design and testing, to a final, fully functional product design and a basic business plan. 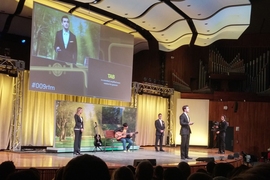 Caption:
Now in its 21st year, the “product engineering processes” class led by David Wallace is designed to give its students a strong sense of what’s involved in taking a product all the way from brainstorming ideas, through preliminary design and testing, to a final, fully functional product design and a basic business plan.
Credits:
Photo: David L. Chandler

Caption:
“Team Yellow” demonstrates their product design, called Strum, which offers a way for guitar players to automatically record the notes they play, without having to remember the notes and put down the instrument to record them.
Credits:
Photo: David L. Chandler

The theme for this year’s student projects in the mechanical engineering class called Product Engineering Processes was “rough, tough, and messy,” but the student teams’ product ideas were much more pleasant and positive than that may sound: All eight were designed to be life-saving or health-enhancing, or at least lots of fun.

Three of the products introduced Monday night, in a raucous, enthusiastic, and music-filled set of final class presentations in MIT’s Kresge Auditorium, were designed to assist people with medical conditions or physical limitations, and two others were intended to be protective equipment for workers. The remaining three products were: a device to prevent ice dams on roofs, a fun new interactive arcade game for kids, and a musical device.

Now in its 21st year, the class, known by its course number, 2.009, is led by professor of mechanical engineering David Wallace and a large team of assistants and mentors. It is designed to give its students — 140 of them this term — a strong sense of what’s involved in taking a product all the way from brainstorming ideas, through preliminary design and testing, to a final, fully functional product design and a basic business plan. Along the way, students build a strong sense of teamwork and learn to collaborate effectively.

The device one of the teams came up with has the potential to be a lifesaver for many people, especially student-athletes. It is a simple, light, low-cost defibrillation device called Revive that could fit in a coach’s backpack and deliver heart-starting shocks using just the power of a smartphone battery. Meanwhile, the app controlling the device would have a built-in electrocardiograph to monitor the patient’s heartbeat and determine whether a defibrillation shock is actually needed, and if so exactly when and for how long. The app also coaches those using the device on exactly what to do, step by step. The device would cost about 30 percent less than existing defibrillation systems, and it would be more compact and lightweight, the team says.

During their presentation, David Hesslink described the experience of losing a 15-year-old friend while in high school; the friend died of cardiac arrest after colliding with another player on a school baseball field, and might have been saved if the needed equipment had been available in a timely way. Over 300,000 people each year undergo cardiac arrest in the U.S., and only 10 percent of those survive it, Hesslink says; this new device might help to increase that survival rate.

Two other assistive devices were also inspired by personal experiences, as described in the teams’ presentations. One is a new kind of walker, called Stryde, that improves the safety and ease-of-use of conventional walkers. When someone using a walker is on a sloping surface, they must be sure to hold on tightly to the device to make sure it doesn’t roll away downhill, leaving them stranded and unsupported. To prevent that, this innovative walker features built-in brakes that are always on by default and only release when the user leans on the device. The walker was inspired by the needs of an individual the team members had met, who described to them the problems he has experienced when using a conventional walker on sloping surfaces.

Another device was inspired by Burt Pusch, a wheelchair user who described the challenge of using an electrified wheelchair outdoors, where any risk of being caught out in the rain could not only could get the user wet but also cause a dangerous short circuit in the chair’s mechanisms. To alleviate that and allow wheelchair users more freedom to spend time outside in uncertain weather, the team designed a rain canopy that could be deployed above the chair within seconds, at the press of a button. It could then be retracted with another button press. Pusch took part in the team’s demonstration at Kresge, driving his Dryve-equipped wheelchair through a drenching “rainfall” that was provided onstage by a set of sprinklers.

Two teams addressed problems experienced by workers using protective gear. One solution is a system that allows people in chemical labs to remove their protective gloves without having to touch them. According to studies, more than half the people who use such gloves remove them improperly, creating a risk of serious chemical contamination. The new device is equipped with smooth, plastic, shoehorn-like protrusions that hook under the gloves and allow their removal without the need to touch them, potentially drastically reducing the risk of such contamination.

The other device is an intercom system built into a respirator of the kind used by painters and other construction workers. Since it’s very hard to speak or hear with the respirators on, people often pull them off when they need to communicate — potentially exposing themselves to dangerous airborne particles. The built-in communication system could eliminate the need to pull off the mask in order to talk or listen.

People in New England are all too familiar with the hazard of ice dams on roofs, but one team came up with an automated solution. They devised a pipe that runs along the roof and dispenses a de-icing solution automatically when the conditions are right for ice dams to form, creating open channels for the meltwater to run safely off the roof.

Finally, two teams demonstrated designs that were just plain fun. One is a way for guitar players to automatically record the notes they play, without having to remember the notes and put down the instrument to record them. And the other is a new kind of arcade game: a moving rock-climbing wall for kids, which moves steadily downward as the child climbs, showing the pathway to follow using lighted handholds. Because the wall is moving, no matter how much the users may climb, they’re always within a few feet of a cushioned landing pad for safety.

At the evening’s conclusion, as in years past, the students in the class expressed their appreciation for Wallace’s inspiring teaching by presenting him with gifts during the confetti-bedecked finale: a bottle of maple syrup in recognition of his Canadian origins (which he sipped heartily on the spot) and a pancake-making 3-D printer to provide him with an endless supply of automated breakfasts.