Student teams design in the face of danger 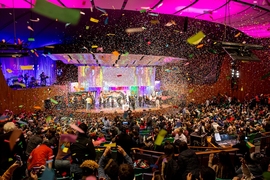 ↓ Download Image
Caption: At the conclusion of Monday’s final presentations for the mechanical design class 2.009, teaching assistants for the class showered the capacity crowd at Kresge Auditorium with confetti, celebrating successful demonstrations of their inventions by eight teams of students.
Credits: Image: Danny Goldfield

Caption:
At the conclusion of Monday’s final presentations for the mechanical design class 2.009, teaching assistants for the class showered the capacity crowd at Kresge Auditorium with confetti, celebrating successful demonstrations of their inventions by eight teams of students.
Credits:
Image: Danny Goldfield

Boaters who fall overboard, ambulance drivers who navigate speed bumps, and crutch or wheelchair users who want more freedom and control are among those who could benefit from the innovative devices conceived, designed, built, and tested by students in MIT’s iconic product design class known by its course number, 2.009.

The theme for this year’s class projects was “danger,” and the products the student teams developed to address that challenge were demonstrated to a cheering, stomping capacity crowd at Kresge Auditorium on Monday night. The semester-ending performance has become a major annual event, featuring a live band, clouds of confetti, and hundreds of pompom-waving fans.

Eight color-coded teams of 15 to 20 students each made their presentations, describing an unmet need, the design they created to meet that need, and a business plan for how to launch their new device into the market. While the primary purpose of the class is to impart skills in product design and construction and in teamwork, over the years many devices designed in the class have been developed into real products and have led to the creation of new companies.

In different ways, two of this year’s inventions addressed the problem of people falling or being swept overboard from a boat at sea — one by facilitating immediate rescue and the other by extending the survival time for someone floating in frigid water.

The rescue device from the yellow team, dubbed Manta, consists of a double-barreled gun that fires a pair of ropes toward the floating person. Each rope has an inflatable life preserver at its end, which automatically inflates upon hitting the water. Once the stranded person grasps the line they can be safely reeled back in to the boat. The team says about 2,000 people fall from pleasure boats in the United States each year, and about half do not survive, so equipping boats with such a system could potentially save many lives. They tested the system by having 12 volunteers who had never seen it before try it out for mock rescues; all 12 were able to deploy it successfully.

For those swept off fishing vessels in stormy seas, immediate rescue may not be feasible. They may have to rely on survival suits to await rescue when the storm abates, but present survival suits will only keep someone alive for about six hours in freezing waters. The blue team came up with an improved survival suit that could double that survival time, by using a system of batteries and heating pads to supplement the insulation of the suit with active heating. To demonstrate the system, two students floated in tanks of cold water onstage, one wearing a standard survival suit and one with the new version. Their  temperatures were displayed on a screen, demonstrating a dramatic difference in comfort and survivability.

Two other teams addressed mobility and comfort for users of wheelchairs, crutches, or knee scooters. The green team produced a device called Elevate that can be fitted to a standard wheelchair and allows the user to raise the height of the seat, enabling them to sit comfortably at a high table, reach items on high shelves, and converse with people at a comfortable eye level. The device could be useful for many of the 2 million people in the U.S. who presently use manual wheelchairs, the team members said.

Meanwhile, the pink team designed a system for those recovering from a broken leg: a knee scooter that can be converted into a pair of crutches in less than 15 seconds. This solves a dilemma for those who have to choose between the relative speed and comfort of the scooter or the flexibility afforded by crutches.

One team produced a utility knife, like those used by construction workers to trim wallboard, that has a built-in safety system. The blade quickly retracts if the device senses that it is about to contact a person’s hand, which it does by detecting the electrical conductivity of the flesh. The team demonstrated the device onstage by having one student deliberately run the blade right over his hand. (During testing, they used a lot of hot dogs, they said.)

Other teams produced devices aimed at improving quality of life. One devised a system for nursing mothers who rely on pumped milk instead of breastfeeding. To help those mothers and their babies bond, the system combines a breast pump and feeding bottle into one unit. The baby can be cradled in a typical nursing position against the mother’s chest, while pumping and nursing happen at the same time. Another team developed a device with an infrared sensor that can be mounted above a typical kitchen stove. It continuously provides precise temperature readings of what’s cooking on each burner, enabling foods to be cooked to exactly the right temperature for safety and good taste.

And finally, to help speeding ambulances make it to the emergency room faster and potentially save lives, the silver team devised a new kind of speed bump to replace those often found on residential streets. Since ambulances must slow down for every such speed bump, that can increase the time to reach their destination. Instead, the system they call Sentry uses hydraulic jacks under a steel-plate speed bump to lower the bump down to level with the road when activated by an electronic signal from the ambulance. The team has already contacted municipal authorities in three cities around the U.S. to begin real-world tests of the system, they said.

At the conclusion of the evening of demonstrations, students paid tribute to the course instructor, professor of mechanical engineering David Wallace, by presenting him with a pair of Eames-style chairs (one of them emblazoned on the back with “I ♡ Canada,” referring to Wallace’s home country), and a portrait of him constructed as a collage of photos of the 170 students in the class.

Wallace, addressing the crowd while wearing a black leather outfit in the persona of his alter-ego “David Danger” in keeping with this semester’s class theme, thanked the students and emphasized that the class is really all about them. “With a little bit of design and process,” he said, “we can make a better world.”