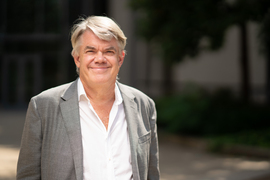 In late 1994 Mexico suffered a severe currency crisis, with attacks on the peso by international traders that led to inflation, bailouts, and macroeconomic woes. Some experts had thought Mexico was ripe for a currency crisis a couple of years before it happened. So if the peso was already vulnerable to attack, why didn’t that occur earlier?

Stephen Morris has some ideas about that. Influential ideas. The MIT economist is the co-author of “Unique Equilibrium in a Model of Self-Fulfilling Currency Attacks,” a widely cited 1998 paper co-authored with economist Hyun Song Shin, who is now at the Bank of International Settlements. The paper changed the way many people in economics and finance think about market dynamics.

Before Morris and Shin published their paper, a common line of thought was that there were multiple points of equilibrium at which currencies (among other tradeable things) would rest. Investors might short-sell a currency, leading to its collapse — which would establish one equilibrium. Alternately, the currency might avoid attacks and remain robust — representing another equilibrium. Either way, large numbers of people would be acting similarly based on the same information.

But Morris and Shin posited a new, more realistic view about how events like this happen. They stipulated that there is often uncertainty about some of the fundamentals concerning a country’s currency, and also uncertainty among investors about what other investors will do.

“If you say there are multiple equilibria, and everybody attacks or doesn’t attack, that’s on the assumption that [there] is common knowledge among the agents,” Morris says. “And that’s surely not going to be true in reality. In reality, there is going to be uncertainty about what other people think about the situation and what they think other people think.”

For that very reason, Morris says, “An attack would tend to occur when it made sense for you to attack, when you were very uncertain about what other people were doing.”

His paper with Shin codified this point, modeling how the behavior of investors hinges greatly on their beliefs about what other investors will do — and laying out how, in this situation, a single equilibrium for a given currency will result. The model made waves: The finance world used the paper by applying the model to their own decisions, while scholars used it to rethink, in general terms, existing assumptions about the way markets work. The model helped persuade people that markets did not operate with utmost efficiency and that “higher-order” beliefs among investors — what you think I will do, or what I think you think — matter hugely.

“I think people liked it because under some circumstances it delivered a unique prediction,” Morris says. “So it got widely used — people could use this and plug it in to different economic problems. I was happy for people to do that, but what got lost a little bit was the idea about people’s higher-order beliefs and the rich modeling of the information structure lying behind this.”

That kind of work is the through-line in Morris’ career: He takes thorny problems about information and beliefs, and finds sophisticated yet useful ways of modeling them, in areas applicable to finance, central banking, firm decisions, and even nonfinancial markets such as school-choice plans.

“I’ve always been very interested in information,” Morris says. “And in trying to take a richer perspective on information and how that affects economic outcomes.”

With a broad and deep portfolio of research that he is still building upon, Morris was hired with tenure at MIT, joining the Institute’s Department of Economics in 2019. He was recently named the inaugural Peter A. Diamond Professor in Economics.

Morris did not always think economics was something he would pursue. As an undergraduate at Cambridge University, he studied math and, for the first time, economics.

“I think I have an origin story which a reasonable number of economists have,” Morris says. “You’re interested in math and analytical reasoning, and then you discover you’re interested in the world and social science as well, and then you discover economics is a subject addressing big, real-world problems where these analytical tools are being used in a significant way.

Still, Morris did not instantly jump into graduate work in economics. First he attended Yale University as part of an exchange program, then spent two years in Uganda, working as what he calls a “practicing development economist,” before entering Yale’s PhD program in economics.

“At the end of the day I missed academia, came back, and did a very different type of economics,” Morris says. “I do theoretical microeconomics.”

Morris obtained his PhD from Yale, then joined the faculty at the University of Pennsylvania straight out of graduate school. He subsequently taught at Yale and at Princeton University, before joining MIT.

In his years as a practicing theoretical microeconomist, Morris’ work has ranged across a number of problems and bridged the gap between pure theory and more applied theoretical endeavors. A 2002 paper he wrote with Shin, “The Social Value of Private Information,” looked at the ways different market participants may coordinate, crowd out useful public information, and limit the spread of useful knowledge in markets — a work that has also been widely cited, and which generated considerable follow-up research among economists.

On a different note, a 2005 paper Morris wrote with economist Dirk Bergemann, “Robust Mechanism Design,” was influential in the field of mechanism design — the development of nonfinancial markets that apply to things like school choice or medical matches. In it, Morris and his colleagues queried whether such markets can reach optimal outcomes for everyone in them. One key point of the paper was to question how well we can know, and model, the beliefs of — say — parents choosing schools for children. The paper did not lead to a single outcome in the way the currency-attack model did, but it also generated a large follow-up literature in the field about assumptions inherent in mechanism-design work.

“To me it’s all unified,” Morris says of the different branches of his work. “What people may remember from the currency attack paper was that this was a useful trick to get the unique equilibrium. Whereas the robust mechanism design paper was saying there are lots of different things that can happen. So in that sense they may seem to be going in different directions, but in my mind, it was all about taking a richer perspective on information structures and what their consequences are.”

At MIT, he is returning to the question of when the economy switches between equilibria, started in his 1998 “Unique Equilibrium” paper, sometimes in tandem with MIT economist Muhamet Yildiz. Morris is also interested in the crossover between his work and that of computer scientists, and views MIT as a place with significant potential for collaborative, interdisciplinary research. He also finds the Department of Economics to be a highly productive place for him to work.

“It’s collegial, but in particular that means there are more intellectual interactions as well,” Morris observes.

He notes that he came to the Institute partly for the teaching opportunities, as well. In his first semester at MIT, Morris taught MIT second-year PhD students in a course about writing effective papers; he anticipates extensive advising of graduate students, as well as good in-class experiences.

“The main thing that drew me to be here was the PhD program,” Morris says. “I’d heard great things about it over the years.”

Between research and teaching, Morris will no doubt find his own unique equilibrium at MIT, too.

Optimizing kidney donation and other markets without money