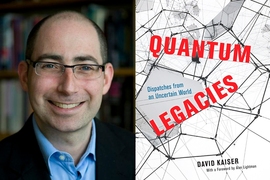 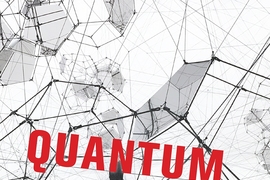 Austrian quantum theorist Erwin Schrödinger first used the term “entanglement,” in 1935, to describe the mind-bending phenomenon in which the actions of two distant particles are bound up with each other. Entanglement was the kind of thing that could keep Schrödinger awake at night; like his friend Albert Einstein, he thought it cast doubt on quantum mechanics as a viable description of the world. How could it be real?

And yet, evidence keeps accumulating that entanglement exists. Two years ago MIT Professor David Kaiser and an international team used lasers, single-photon detectors, atomic clocks, and huge telescopes collecting light that had been released by distant quasars 8 billion years ago to further refine tests of quantum entanglement. The researchers thus effectively ruled out a potential objection, that the appearance of entanglement might derive from some correlation between the selection of measurements to perform and the behavior of the particles being tested.

Yes, entanglement defies our intuition, but at least scientists can keep learning about it, Kaiser notes.

“Schrödinger could only stay up all night,” says Kaiser, meaning that theorists in the 1930s just had “pencil and paper and very hard-thought calculations and compelling analogies” to guide them, but little physical evidence. Today, by contrast, “we have instruments to study these questions in ways that weren’t even possible experimentally or empirically until recently.”

Now Kaiser, a professor of physics at MIT and the Germeshausen Professor of the History of Science in MIT’s Program in Science, Technology, and Society, has written a new history of the subject, “Quantum Legacies: Dispatches from an Uncertain World,” published this month by the University of Chicago Press. Moving between vignettes of key physicists, original research about the growth of the field, and accounts of his own work in cosmology, Kaiser emphasizes the vast changes in the field over time.

“There have been really quite dramatic shifts in the fortunes of the discipline,” says Kaiser, who says he aimed to present readers with “a different kind of story, with different through-lines, over a very turbulent century.”

The physics boom and the crash

Indeed, many histories of quantum physics have been telescopic in form, focusing on the field’s most well-known stars: the foundational quantum theorists Niels Bohr, Paul Dirac, Werner Heisenberg, and Schrödinger, with Einstein usually featured as a famous quantum skeptic. Before the physics community was thrown into turmoil by world war, these scientists developed quantum mechanics and identified its most baffling features — including entanglement and the uncertainty principle (the trade-off in accuracy when measuring things like the position and momentum of a particle).

We still struggle to interpret these concepts, but much else has changed. In particular, Kaiser emphasizes, physics witnessed a quarter-century of unprecedented growth starting in the 1940s, especially when students flooded back into America’s universities after World War II.

“We trained more people in physics in that quarter-century after the war than had previously been trained, cumulatively, since the dawn of time,” Kaiser says of this growth phase.

Meanwhile, massive particle colliders changed the methods of physics and yielded new knowledge about subatomic structures. Huge teams collaborated on experiments, strictly intent on grinding out empirical advances. More people than ever were becoming physicists, but seemingly fewer than ever pondered the “philosophical” problems raised by quantum physics, which became unfashionable.

“It was more than a pendulum swing,” Kaiser says. “Physics saw these quite dramatic shifts in what even counted as a real question.”

Kaiser carefully documents this shift through close readings of physics textbooks, showing how an ethos of pragmatic calculation became dominant. Textbook authors, he adds, are “always making a range of value judgements: What’s an appropriate topic, what’s an appropriate method? What should we be asking questions about? What is ‘merely’ philosophical?”

And then the physics bubble burst: Funding, enrollment numbers, and jobs in the field all dropped precipitously in the early 1970s, due to a slowing economy and decreased federal funding.

“Those numbers crashed for virtually every field of study across the academy, but none fell faster than physics,” Kaiser says.

The Tao of large colliders

Perhaps surprisingly, that 1970s job-market crunch helped revive interest in the quantum curiosities of the 1930s. As Kaiser detailed in his 2011 book “How the Hippies Saved Physics” — which grew out of this book project — some key advances toward understanding entanglement came from then-marginal physicists who, lacking fast-track research opportunities, had relative freedom to explore neglected issues.

Such unconventional thinking soon began to influence teaching as well, Kaiser notes in “Quantum Legacies.” Fritjof Capra’s period bestseller “The Tao of Physics,” linking Eastern religion and quantum mysteries, is known today as a New Age staple — but it landed on academic syllabi in the 1970s, thanks to physics professors eager to lure students back to their classrooms.

Since the 1970s, quantum physics has seen multiple mini-eras zip by. Defense spending spurred a 1980s recovery in physics, but when U.S. Congress killed the Superconducting Supercollider project in 1993, physicists in some branches of the discipline could not generate many new experimental results — until the Large Hadron Collider came online in 2008. Multiple recent academic generations have thus experienced physics as a turbulent discipline, with its fortunes tied to distant politics.

“Sometimes people got caught out of sync, they entered physics during boom times and, through no fault of their own, the opportunities vanished before they got their degrees,” Kaiser says. “And we’ve seen that happen twice in this country in the last half-century.”

So while the likes of Schrödinger could make progress with a pencil and paper, the material conditions of physics matter immensely as far as contemporary progress in the discipline goes.

“The ideas matter a great deal,” Kaiser says. “But the ideas are embedded in a changing world.”

“Quantum Legacies” has drawn praise from scholars; Nobel-winning physicist Kip Thorne of Caltech praises the book’s “remarkable set of vignettes about major developments in physics and cosmology of the past century,” which “beautifully integrate science with human history.” Award-winning novelist Nell Freudenberger notes Kaiser’s “talent for uncovering connections between otherworldly ideas and the social and political worlds in which they take shape,” which, she continues, makes for “a simply spellbinding guide to the mysteries of the universe."

For his part, Kaiser hopes readers will ponder the “doubleness” of scientists — they hope to find eternal answers, despite being bound by their era’s tools and assumptions. And while “Quantum Legacies” explores the lives of some individual physicists, such as Dirac, Kaiser also hopes readers will appreciate how thoroughly quantum physics has been a collaborative enterprise.

“In science there is a tradition of writing about the single genius, but quantum mechanics from day one has required an ensemble cast,” Kaiser says, adding, “When we study institutions, generations, and cohorts, I find that more valuable than thinking about these unattainable geniuses on the mountaintop — which is always a fable, but it’s an especially poor-fitting fable for this set of developments.”

Consider, he says, that more than 15,000 physicists published papers relating to the Higgs Boson — exploring how subatomic particles acquire mass — over a 50-year span. But only after the Large Hadron Collider started running could scientists find evidence for it.

“It makes me think about my own [work] in a different way,” Kaiser says. “What have I not been able to think of, that the next generation will open up? I find that much more exciting, as a human story, as a conceptual story, than focusing on a single lone genius.”

Forbes contributor Chad Orzel spotlights Prof. David Kaiser’s new book, “Quantum Legacies.” Orzel notes that, “this is a very solid work both in terms of the history and the physics discussed in it, and Kaiser is a very engaging writer.”